Many families went to the Baltic Sea for their summer holiday. But many holiday spots were limited and, thus, very high in demand - even in the camping sites. Our collection contains many objects that might have accompanied a summer holiday. We present 10 of them in this blog post. (21 Sep 2022)

The summer holidays are the highlight of the year for many people, and this was also the case in the GDR. But the travel restrictions imposed on GDR citizens and the limited list of travel destinations they were made to choose from did not make holiday planning the most straightforward task. Those who managed to secure one of the longed-for FDGB places or a spot at a camping site could consider themselves lucky. In this blog post, we have selected ten objects from our collection that may have accompanied a GDR family camping on the Baltic island of Rügen.

1. Rügen and Hiddensee Brochure from the FDGB

Spontaneous holidays were out of the question for most GDR citizens, as accommodation usually had to be applied for at least half a year in advance. Those who failed to register at a campsite and set up their tents illegally may have been punished with fines or expulsion from the campsite. For trips to places beyond East Germany, such as Hungary, Romania and Bulgaria, a visa was even required. So, our GDR family would probably begin their holiday preparations by consulting the “FDGB Feriendienst”, an offshoot of the Free German Trade Union Federation responsible for organising subsidised holidays for its workers. This illustrated brochure of Rügen and Hiddensee was produced by the FDGB in 1967 and showcases the sandy beaches and blue skies that the Baltic coast was and is most famous for. It also contains a map of the region, highlighting key attractions and hiking trails. Our GDR family can now begin planning exactly where they want to go and what kind of activities they want to undertake, before packing up their things and heading to the coast. 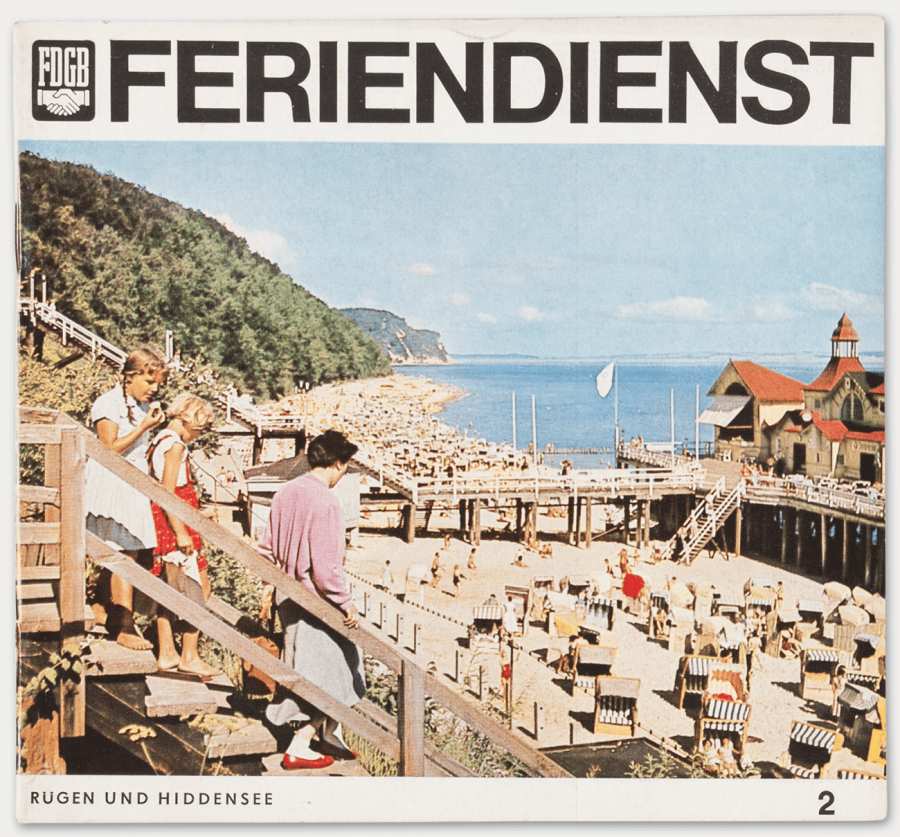 After flicking through the brochure, our GDR family decide to spend a week camping on the shores of Rügen and secure themselves a camping spot in Binz. Of course, the most important part of any camping trip is the tent, which was also the easier option for families who could not gain access to a bungalow or caravan. The Lunik extra, manufactured in 1974, was the perfect option for a small family looking to escape the constraints of everyday life and retreat into nature. The tent held space for up to 3 people and offered plenty of natural light with its two large windows and roll-up fabric flaps. The Lunik extra was made from cotton fabric and had to be waterproofed in advance so that it didn’t rain through. But this doesn’t bother our GDR family, who are simply grateful to have received a camping spot in the first place. 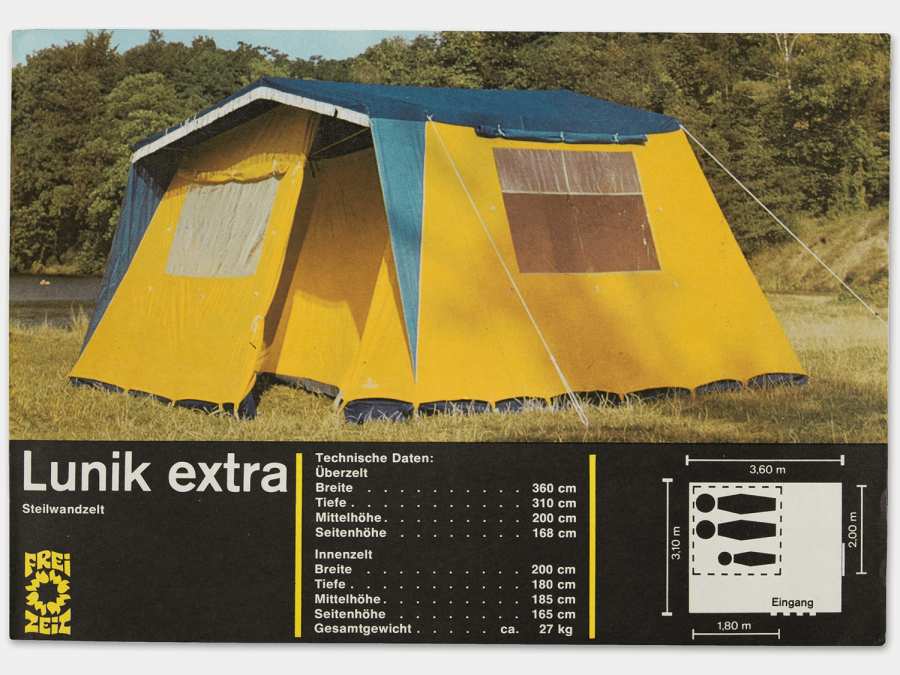 Now that the tent has been set up and waterproofed, it is time for our GDR family to start exploring the area. In many ways, camping allowed for more freedom, independence and adventure than other holiday packages, as, unlike in the FDGB holiday homes, families did not have to adhere to a strict timetable that determined when mealtimes were.

This camping stool from our collection would have been the perfect addition to any day out in Rügen, with its compact design meaning that it could be folded up and taken anywhere. But what would a day out be without a picnic? After setting up their camping stools, our GDR family then unpack their ‘Pouch’ picnic basket, already complete with all the crockery, cutlery and storage containers they could ever need. This still left plenty of space for something sweet, such as Bambina chocolate, a pack of Knusperflocken or even a few Pfeffi mints. 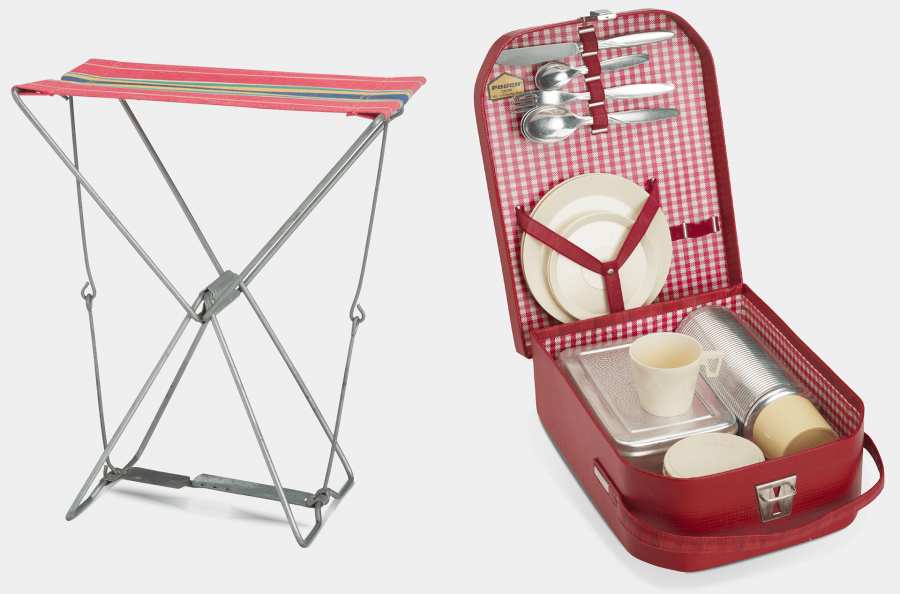 Those who wanted to stay informed whilst on the road or simply liked listening to music travelled with a portable radio. Besides, even for the most harmonious families, the constant time spent together could sometimes become too much and the best thing to do was simply to turn on the radio, sit back and relax. If our family wanted to listen to the news, ‘Radio DDR 1’ was their main option. Perhaps they were more interested in listening to cultural discussions or tuning into one of the morning regional programmes in Rügen, in which case the ‘Radio DDR 2’ station was their best bet. However, the optimal station for our GDR family would have probably been the ‘Ferienwelle’, a holiday radio station that was only available on the Baltic coast between May and September. The station was popular for its useful weather reports and numerous greeting programmes but lost some of its listeners to the western FM radio station NDR in the 1980s, which had a wider reach.

The portable radio ‘Stern Camping R 130’ was a great option for camping holidays, as it was easy to transport due to its narrow shape and swivelling carrying handle. Designed by Michael Stender in 1968 and belonging to the ‘VEB Stern-Radio Berlin’ company, this transistor radio only ran on R20 round batteries, so bringing a few extra packs was always a good idea. 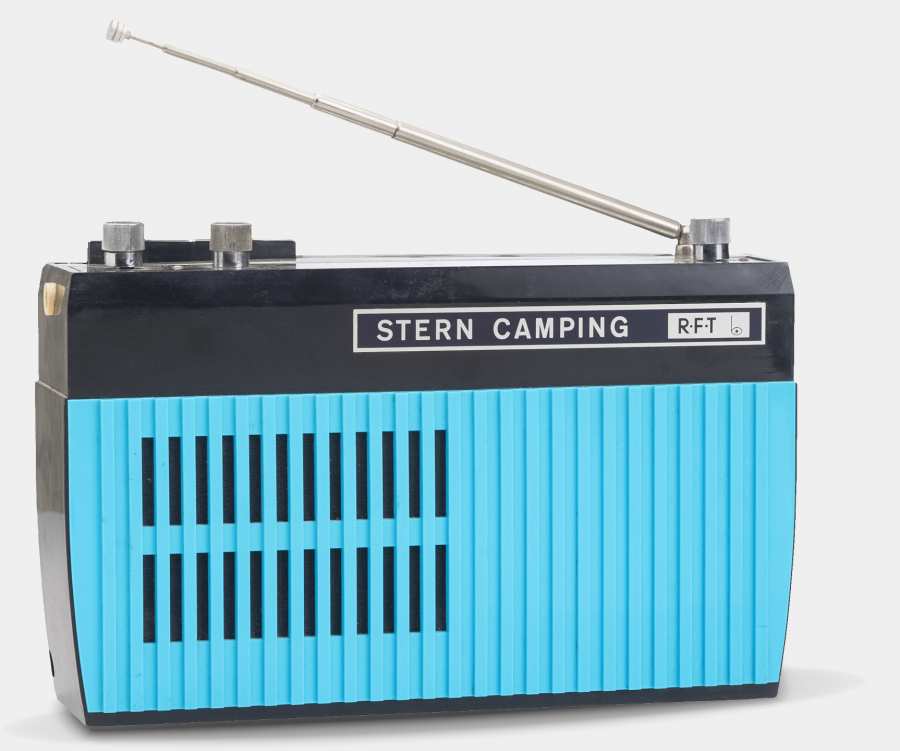 Rügen was perfect for hiking, and tourist maps were in abundant supply. Whilst it may be difficult for us to imagine today, our GDR family wouldn’t have been able to pull out their smartphone or turn on their navigation system when routes became confusing. Tourist maps, therefore, were an absolute must for any holiday by the coast.

Our GDR family have woken up with a lot of energy and have decided to explore one of the region’s many hiking trails. After taking a look at their hiking map, they decide to head for the Chalk Cliffs on Rügen, starting in Sassnitz and then making their way to Königsstuhl in the north. Breathtaking vistas are always guaranteed when hiking by the Baltic Sea. 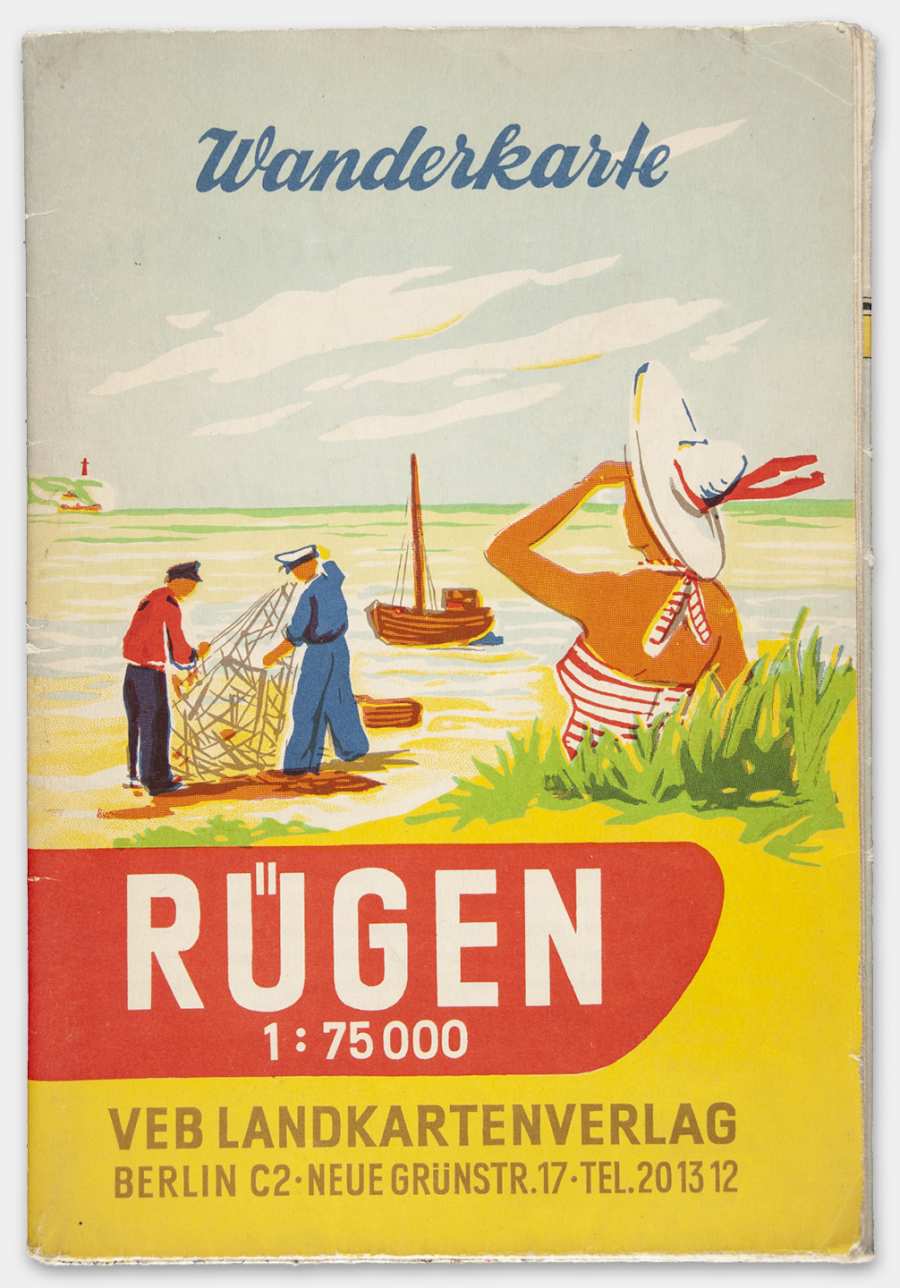 What would the point of a holiday be if you didn’t find time to write to loved ones and friends back at home? Since our GDR family are staying in Binz, they choose to buy this postcard with photos of the Baltic seaside resort. This postcard in our collection portrays the ideal combination of sun, sand and spa architecture that Binz was well-known for. The Kurhaus Binz, seen in the bottom left-hand corner of the postcard, was one of the area’s most popular sights. No trip to Binz is complete without a visit to the Müther-Turm either. The shell structure, designed by architect Ulrich Müther in 1981, served as a base for lifeguards on the island until 2004 and was then reopened in 2006 as the second branch of the Binz registry office. Müther, who himself was born in Binz in 1934, designed approximately 73 other shell structures during his career and, in doing so, contributed to the development of architectural modernism. The postcard chosen by our GDR family is just one such example of the many other postcards they could have purchased, some of which can be found in our collection. 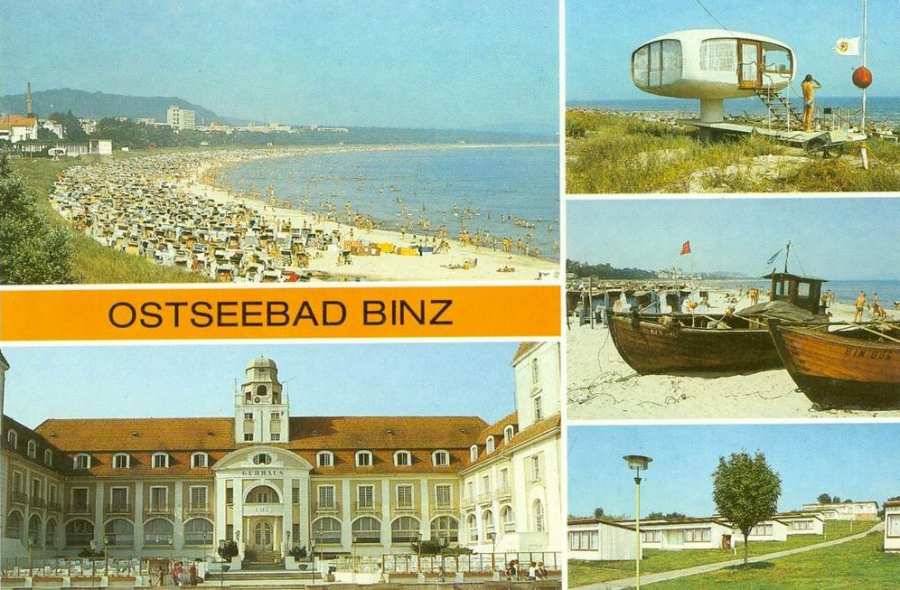 Speaking of coastal resorts, what kind of swimwear would our GDR family have packed? Perhaps they would have brought something similar to the swimming trunks and bikini in our collection. It goes without saying that these items of clothing were not the most aesthetically pleasing, which wasn’t helped by the scratchy synthetic fibre material used to produce them.

This could explain why so many families simply ditched the swimwear and embraced ‘Freikörperkultur’ (FKK), or nudist culture, instead. In 1950, part of the Baltic island of Hiddensee was officially made available for naturism, and with no genuine effort from the authorities to ban nudist beaches, FKK quickly established itself as a widely-accepted social consensus across the GDR. 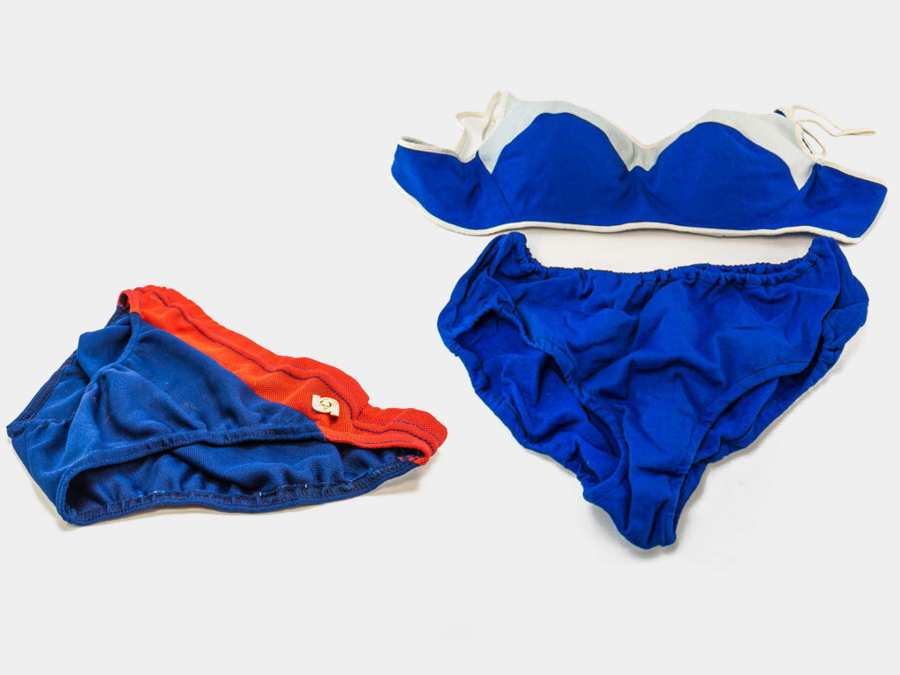 When we imagine the ideal summer holiday, images of sunshine, beaches and blue skies probably come to mind. However, the reality is often very different, especially on the coast. That’s why it’s always good to have a plan B for days when the weather makes beach trips and scenic coastal walks impossible. In addition to open-air cinemas, the Baltic islands were also home to so-called ‘tin can cinemas’ and ‘tent cinemas’, which allowed visitors to enjoy a cosy afternoon or evening at the movies, whatever the weather.

In our collection, you can find the poster for the 1968 film “Heißer Sommer”. Produced by the GDR’s state-owned DEFA studio, the film follows the journey of a group of teenagers from Karl-Marx-Stadt (today’s Chemnitz), who decide to spend their summer holiday in a small village on the Baltic Sea. Starring Chris Doerk and Frank Schöbel as the main characters, the film is still remembered today for its portrayal of what was then the dream couple of the GDR. What a perfect way for our family to spend one of their final evenings in Rügen. 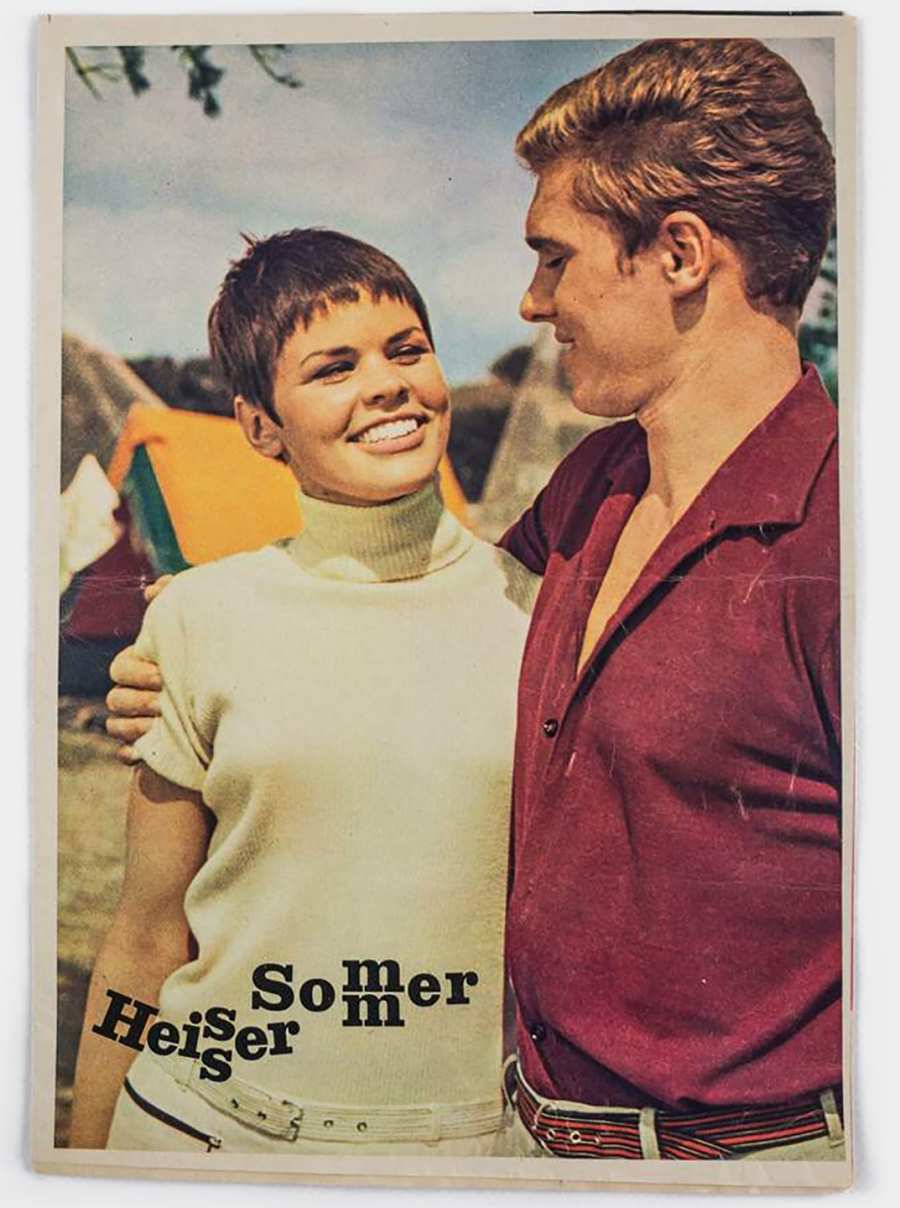 Another great accompaniment to cosy evenings with the family were board games. This game collection contains no less than 8 board games that offered something for every taste. At first glance, the dice game “Raus” (Out) resembles the classic “Mensch ärgere dich nicht” (Ludo). However, the strategy game “Halma” (Chinese Checkers), which could also be played in pairs, was particularly popular. Our GDR family first decide to play a round of “Pferderennen” (Horse Race), the goal of which is to get the game pieces over the finish line. Because they had so much fun playing together, they then opt for a round of “Goldene 6” (Golden 6), where the main goal is to get rid of the wooden sticks as quickly as possible. After hours of playing, our GDR family realise how late it is and finally decide to go to bed. 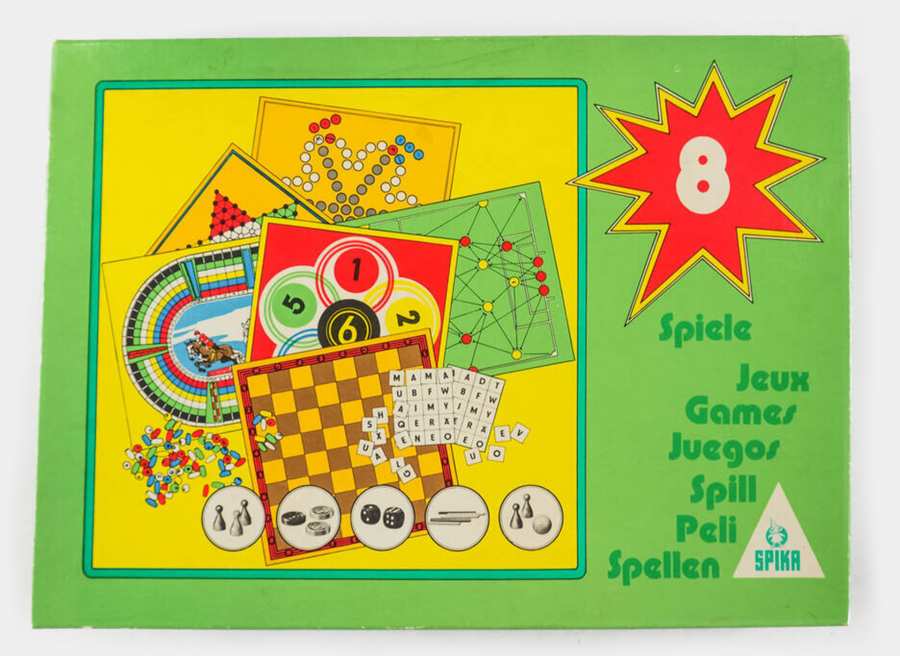 One of the most exciting parts of any holiday is waiting for the holiday photos to be developed. Fortunately, the main lyric of the song “Du hast den Farbfilm vergessen” by Nina Hagen does not apply to our GDR family, who were able to get hold of both colour and black & white film for their trip. Popular choices were the ‘ORWO COLOR NC 19’ and the ‘ORWO SL NP 20’, both of which can be found in our museum collection and allowed families to hold onto the holiday memories they treasured so deeply. They then decide to stick their best snapshots into a photo album.

Nina Hagen, who reached the top of the charts with her song in 1974, sings about her partner Michael having forgotten the colour film for their trip to Hiddensee. She can’t help but cry when she sees that ‘the landscape and Nina and everything’ is only in black & white. Luckily, our GDR family didn’t make the same mistake that Michael did and their photos are now ready to be picked up at the photo shop. 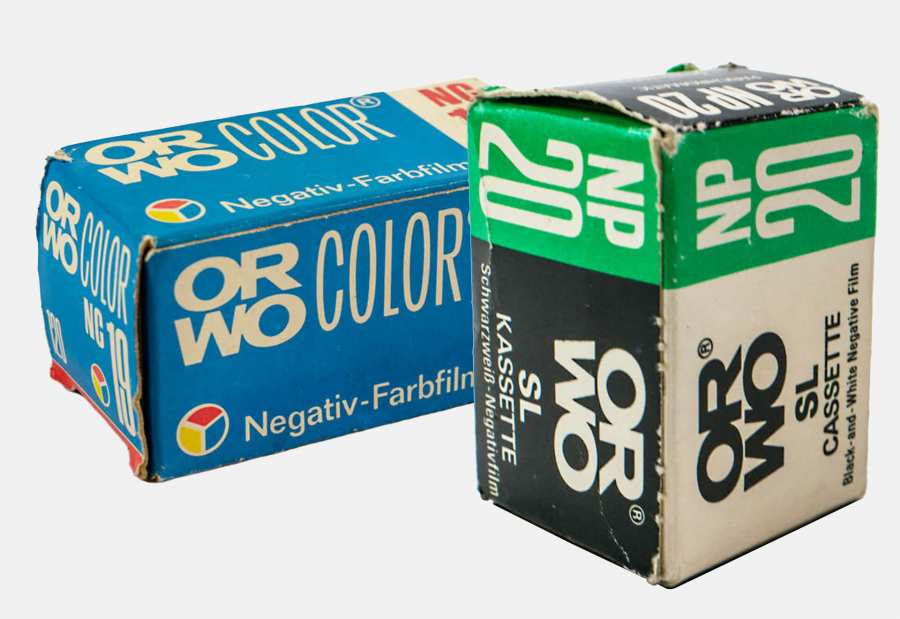 Other objects from the collection for a summer holiday 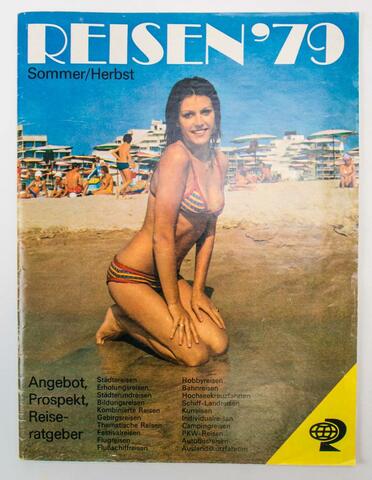 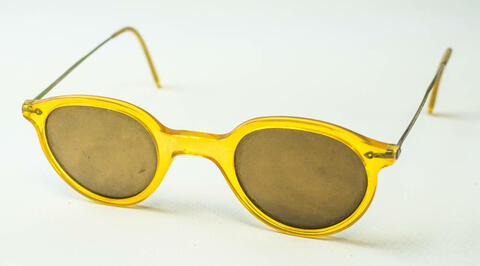 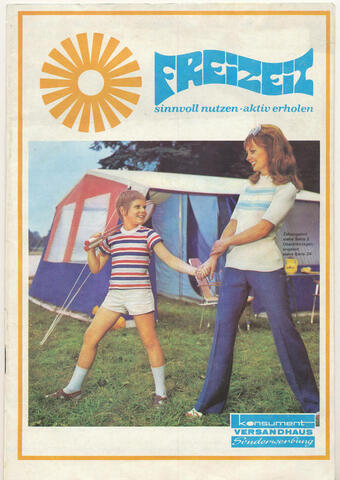 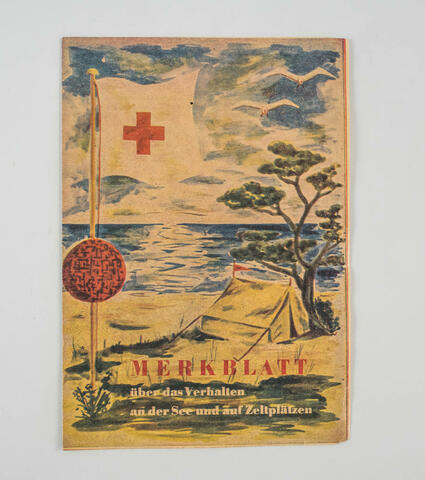 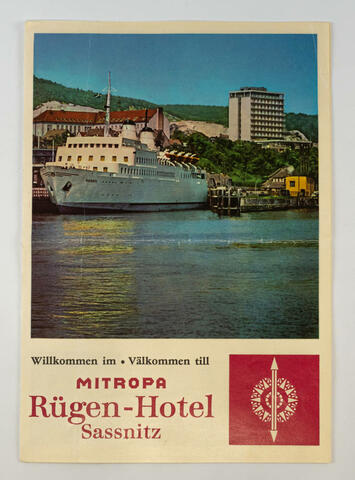 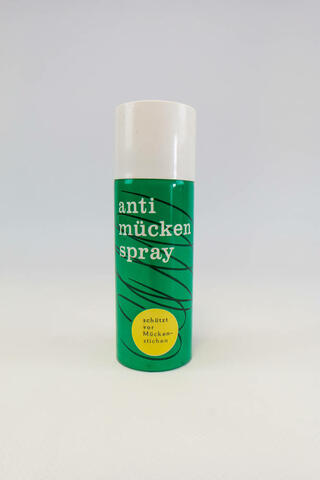