Regarding the inner-German tourist travel with all its aspects, one will inevitably come across the East-German „minimum exchange“ and the West-German „welcome money“. But what do these terms exactly mean and what were their consequences for the people?
by Admin (8 Sep 2015)

Regarding the inner-German tourist travel with all its aspects, one will inevitably come across the East-German „minimum exchange“ and the West-German „welcome money“. But what do these terms exactly mean and what were their consequences for the people?

In order to prevent currency speculation, the export of „Mark of the GDR“ was generally prohibited. Therefore, the „Mark“ was a home currency which was only valid within the GDR. Because the GDR suffered from a shortage of foreign currency since the beginning of its existence, the people's chamber decided to install „Foreign exchange controls“ on December 1st in 1964. In order to generate new money sources for commerce on the international market, the „obligatory minimum exchange“ was introduced. This practice concerned the numerous GDR-visitors from Western countries. Henceforth, every Western individual tourist had to pay a kind of „admission“ to the GDR. Since December 1964, every West-German had to pay a fee of 5 DM (West-Mark) per day of visit, tourists from West-Berlin had to pay a fee of 3 DM per day. Seniors and children under the age of 14 were not charged. The sums were exchanged with a rate of 1:1, which was, regarding the actual exchange rates differing between 1:3 and 1:10, a rather profitable trade for the GDR. The daily fees and validities were constantly changed throughout the years. During the 1980s, Western citizens payed the sum of 25 DM per day, seniors only 15 DM. There was no differentiation between West-Berliners and West-Germans anymore. On December 24th in 1989, the minimum exchange regulations were repealed by the GDR minister of finances Uta Nickel, because the border was opened up recently and the German Reunion was already on its way. All in all, the government of the GDR reached revenues of 4,5 billion DM within 26 years.

The „welcome money“ existed contrary to the „minimum exchange“. The „welcome money“ was introduced by the government of the Federal Republic of Germany in 1970. Originally it was supposed to serve as a financial support mainly for seniors or tourists from East Germany. The obolus of 30 DM could be claimed twice a year. In 1988 the sum was raised to 100 DM but was therefore only payed out once a year. Until the middle of the 1980s a total of 60000 visitors took advantage of the „welcome money“, from then on the number of receiving guests rose abruptly. The reason for this rise were the travel alleviations introduced by the GDR. When the border was opened in November 1989 and thousands of visitors traveled to West-Berlin and West Germany within only a few days, severe logistical problems surfaced. Many pay offices were simply overwhelmed by the enormous number of people visiting from East Germany. Already a few days after the opening of the border, then-mayor Walter Momper decided to establish additional temporary pay offices. Until November 22nd 1989, approximately 11 million citizens of the GDR visited the Federal Republic of Germany or the Western part of Berlin.

Part of our collection is a brochure from the time of the Fall of the Wall. It was published by the Senate Office of Health and Social Affairs in Berlin and informs about the opening times and addresses of pay offices distributing the welcome money. It also contains a map with a list of existing pay offices in West-Berlin.

Another object in our collection is a photo of the Badstraße in the district of Berlin-Wedding. It was taken on November 11th, 1989 and shows a mass of people waiting in front of the pay offices in Wedding. The photograph gives a good impression of the run on the pay offices and the welcome money during the turbulent months following the Fall of the Wall. The photographer is Matthias Schubert from Berlin.

During the months of November and December of 1989 alone about 4 billion DM were payed out in the form of welcome money. The distribution of that specific sum was shut down on December 29th, 1989 and replaced by a foreign currency fund which both German states contributed to.

Do you have memories of what you bought from your „welcome money“ or the „minimum exchange“ and would like to share these memories with us? We are looking forward to your reactions! 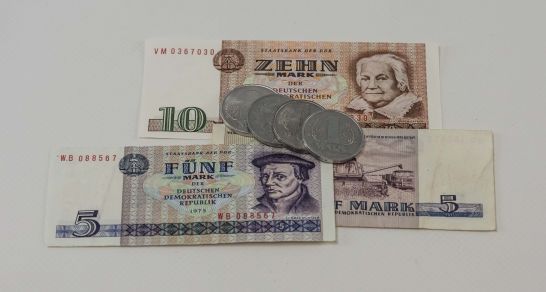 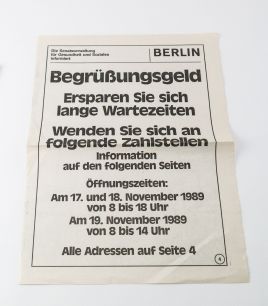 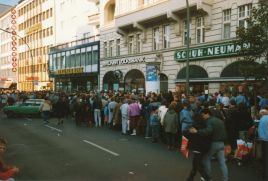