There was no stinginess with decorations and medals in the GDR. In fact, every field of society had its own awards. We present a small selection in this article. by Jörn Kleinhardt (7 Sep 2021)

In contrast to many consumer goods, there was no shortage of medals and decorations of any kind in the GDR. Numerous medals were already awarded to children at school. Of course, there was a great variety. There were, for example, awards for good knowledge, for sporting successes or social commitment. This flood of decorations and medals increased even more as soon as young people became adults. In fact, every field of society had its own awards. We present a few of the well-known and lesser-known awards in this article.

Is there anybody who does not remember the »Golden One« from their childhood? Awarded for successful proof of basic knowledge in the context of road safety education, the badge had been familiar to generations of schoolchildren from 1969 onwards and was usually the badge of honour of their lives. The main focus was on road safety when using a bicycle. There were special »traffic gardens« or set-up courses for taking the »Golden One«. The badge includes a »1« in the centre of a stylised bow. The year of the award is stamped on the ribbon (1978 on the one shown here). 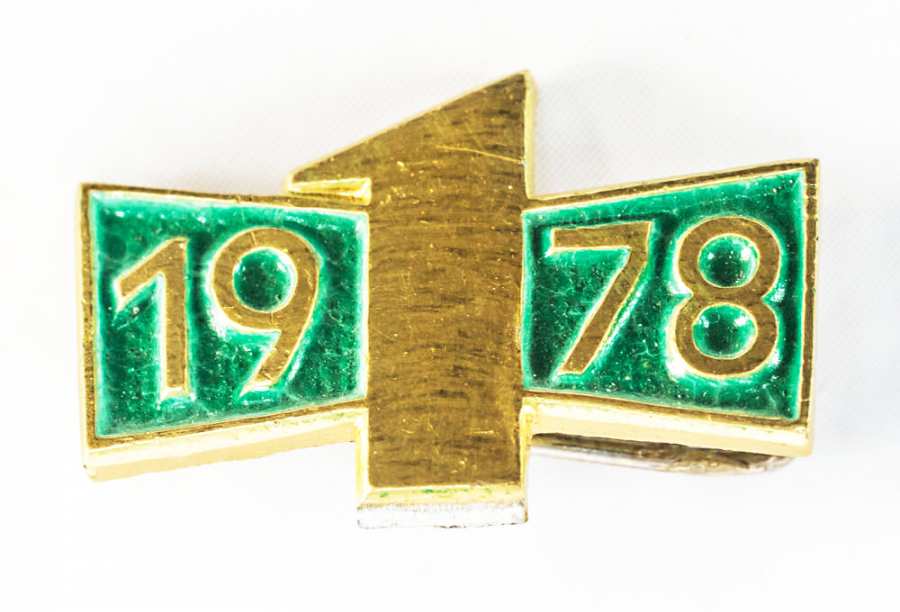 Sports Performance Badges of the GDR

The GDR's »Sports Performance Badge« had been awarded in three levels (gold, silver, bronze) from 1950 onwards. In addition, the award was divided into age groups (children, teenagers, adults). Since 1950, the shape and form of the badge had been changed several times. Our gold medal in the centre of the picture below dates from 1956-64 and was awarded to adults. In the centre, »DDR« can be seen in intertwined letters. The letters are surrounded by oak leaves with a stylised bow. The margin says (translated from German): »Sports badge / Ready to work and defend the country«. The picture also shows a gold medal (left) and a silver medal (right) for adults (marked with an X) and a bronze medal for children (centre, marked with an A). 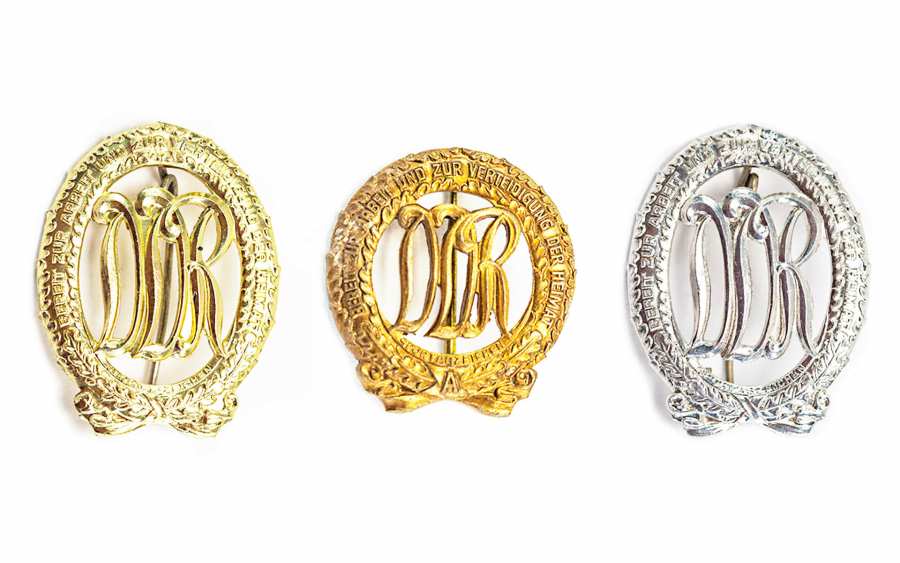 Coal was elementary for the production of energy in the GDR. Accordingly, coal miners were honoured with their own medal from 1972 onwards. The »Medal for merit in the coal industry of the German Democratic Republic« was awarded for the years of work experience in gold (40 years), silver (25 years) and bronze (15 years). The medal shows a briquette factory and an opencast excavator on the front. The GDR coat of arms is depicted on the reverse. It is surrounded by the words (translated from German): »Medal for merit in the coal industry in the GDR«. The medal also includes a small interim clasp which shows the same motif in the centre as on the front. 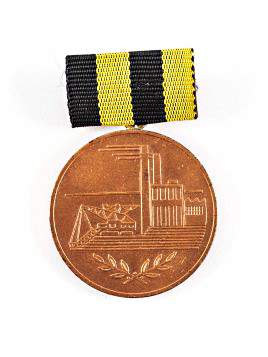 »Medal for loyal service in the Barracked People's Police«

The predecessor of the National People's Army (NVA) awarded its staff with the above-mentioned medal from 1954. This medal only exists in bronze, as the Barracked People's Police (KVP) transformed into the NVA two years after the introduction of the badge of honour. Two flags can be seen on the obverse. Above it is written »For loyal service«, below »KVP« surrounded by oak leaves. The special feature of the medal can be seen on the reverse. Next to the award number (in our case 007899), the provisional national coat of arms of the GDR can be seen in large letters with the hammer (symbol of the working class), the compass (symbol of the intelligentsia) and the half-open wreath of corn (symbol of the peasants). 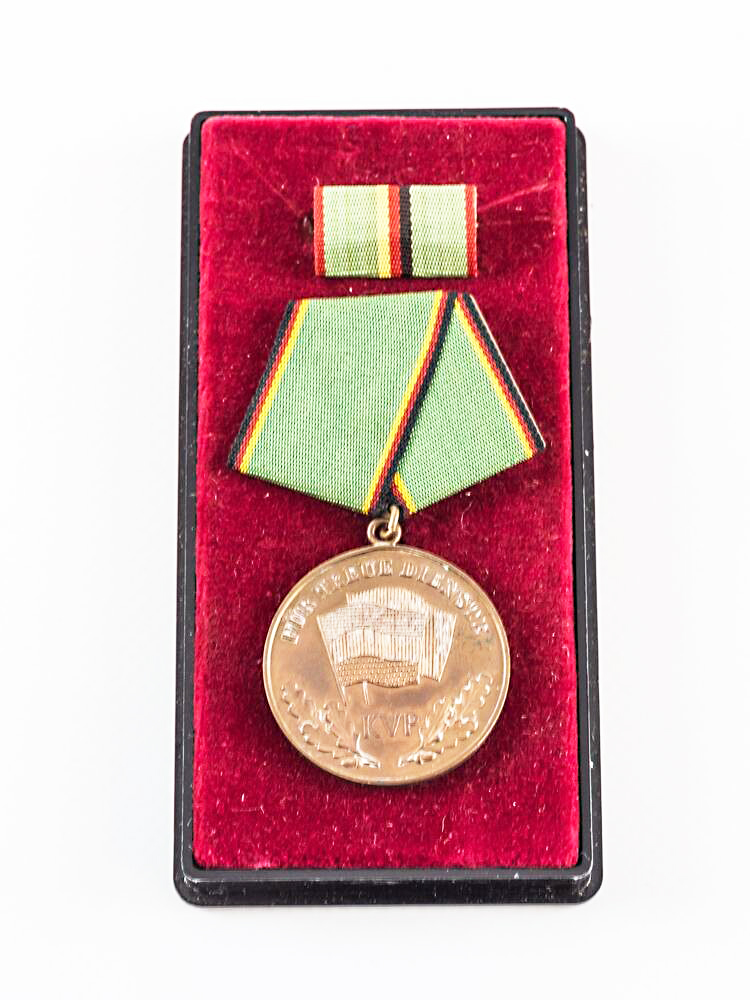 »Activist of the Five Year Plan«

The honorary title had been endowed by the Free German Trade Union Federation (FDGB) from the beginning of the 1950s. It was awarded to deserving workers in the nationally owned companies (VEB). In addition to the honorary title, an activist pass was handed out and a cash bonus was paid. The bronze-coloured medal shows a »5« in front of a hammer, a compass and a wreath of corn in the background. Underneath it is written »Activist«. On the enamelled clasp there is the year of the award (1957 on our case). The slogan on the back says »Peace and prosperity from our own strength« and shows a stylised handshake (symbol of the SED). 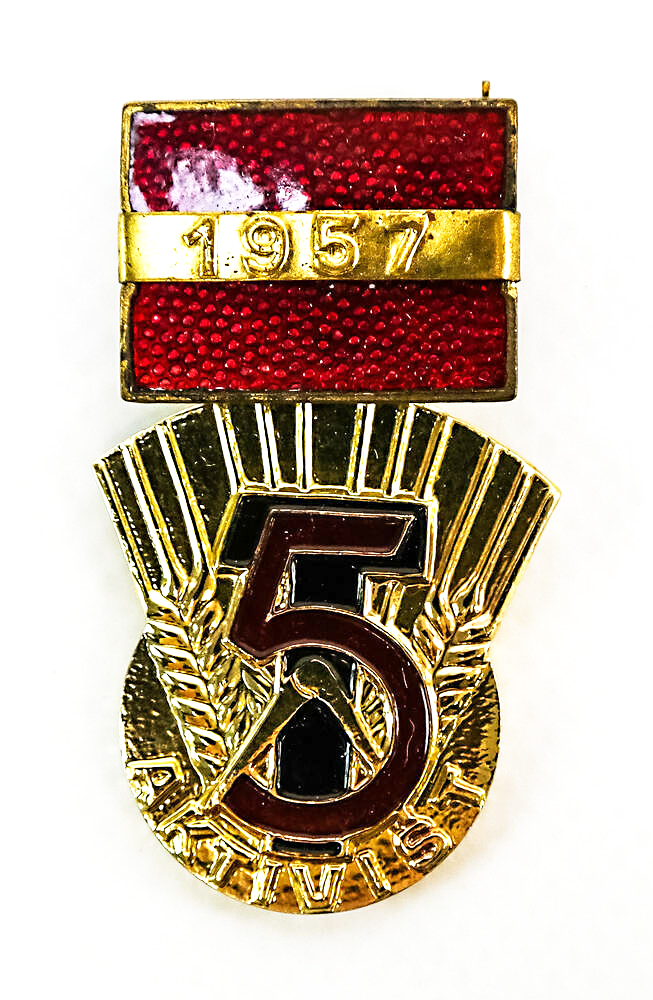 Other orders and medals in the collection of the DDR Museum 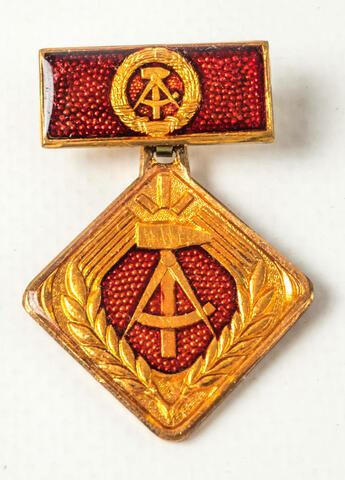 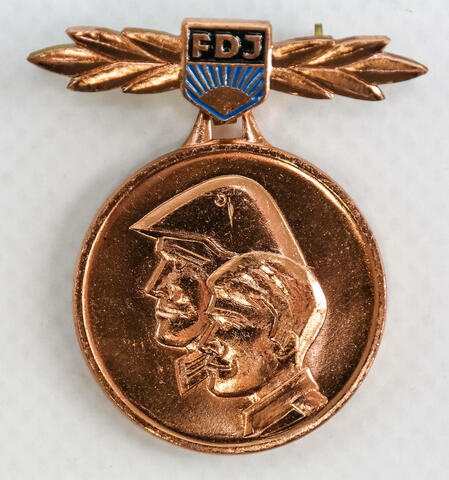 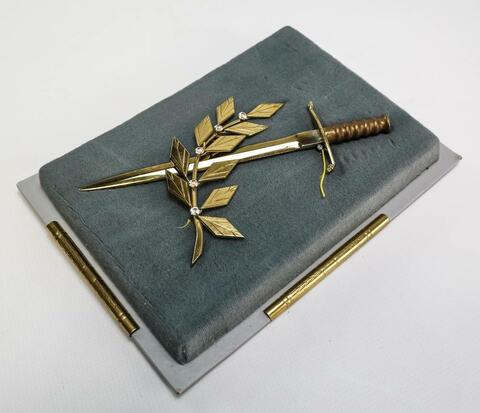 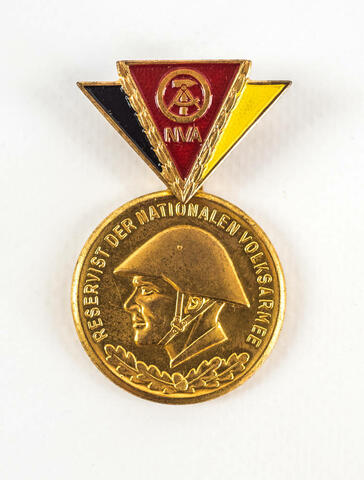 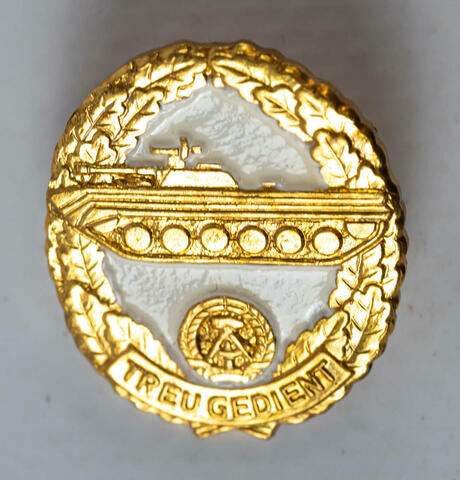 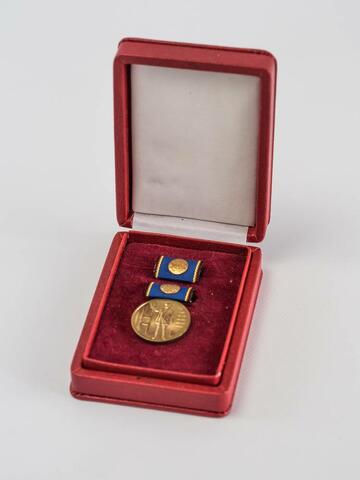 »AKA ELECTRIC«: Household gadgets from the GDR