The collection of the DDR Museum has grown again recently. The object concerned is a self-made converter for the reception of the TV channels ARD and ZDF – programs from West Germany and therefore not officially forbidden for GDR citizens, but nevertheless programs only minimally tolerated by the government. by Admin (16 Sep 2015)

The collection of the DDR Museum has grown again recently. The object concerned is a self-made converter for the reception of the TV channels ARD and ZDF – programs from West Germany and therefore not officially forbidden for GDR citizens, but nevertheless programs only minimally tolerated by the government; at least until well into the sixties.

Since the offered television program in the GDR was limited to 2 channels (DFF1 and DFF2), it was common in many households to establish the reception of TV as well as radio channels from the Federal Republic of Germany with the help of different technical methods. Accordingly, home-made reception amplifiers, converters and antennae were used to allow the consumption of movies, serials, sports broadcasts as well as news programs of Western channels. Depending on the region, ARD and ZDF as well as private channels, Soviet, Polish, Czech or channels from the Allied Forces could be received.

The converter in our collection was built in a private household in Wismar in the sixties. When organizing the necessary parts, some difficulties emerged, for buying certain electrical parts revealed the intended type of use and left the sales clerks rather sceptical. The used connection scheme is taped to the inside of the lid which is fixed to a box with four screws. The box is made from wood and the small holes in it were used for adjusting the channels correctly. The device was connected between the TV and the antenna, which consisted of a wooden slat and bars of aluminum. It was used in a apartment building under the roof in order to be kept out of view from the outside and the “reception of the West” could be kept a secret. The converter enabled the reception of the channel Eutin which had a station near the border and transmitted the channels ARD and ZDF. With the help of a simple button, one could turn on the antenna for the GDR television DFF or the converter to receive channels from the West.

Other households in the apartment building also owned similarly constructed devices. When the retail industry also started to sell suitable converters, the home-made converter was substituted by a newly bought one. According to the donor, however, the device has always worked without any problems and never broke.

The state-owned television of the GDR was officially shut down in 1991 as a result of the Unification Treaty of October 3rd, 1990. New broadcasting companies of ARD were stablished in the new German states which then took over parts of the GDR television.

Did you also watch Western television channels or do you still own devices used for the reception of such programs which you would like to donate to the DDR Museum? If so, we are looking forward to hearing from you! 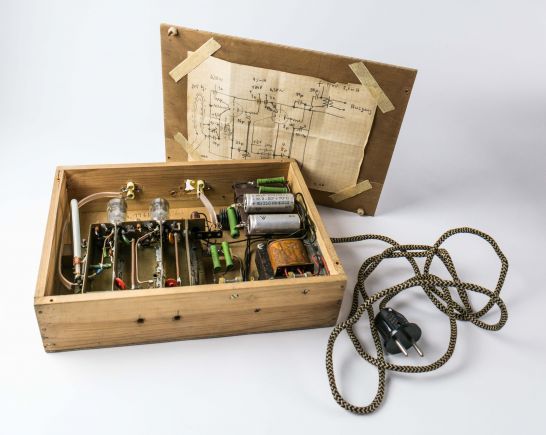 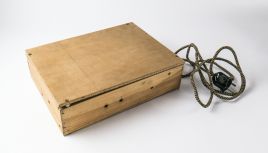