In the German Democratic Republic, filling out a house book was regulated by law according to the reporting ordinance. But what does that mean exactly? How did such a book look like? Who was responsible for it? What was the benefit? Questions which we are going to answer in the following text. As an example we are going to talk about a copy from the early 1950s.
by Admin (16 Mar 2016)

In the German Democratic Republic, filling out a house book was regulated by law according to the reporting ordinance. But what does that mean exactly? How did such a book look like? Who was responsible for it? What was the benefit? Questions which we are going to answer in the following text. As an example we are going to talk about a copy from the early 1950s.

The cover of the house book shows the provisional national coat of arms of the GDR which was officially used between January 12th, 1950 and May 28th, 1953. The emblem shows a hammer which is surrounded by a garland of corn. The hammer is a symbol for the “workers”, the garland of corn a symbol for the “peasants” living in the state which referred to itself as the country of workers and peasants. The later edition of the emblem carried a pair of compasses since 1953, standing for the intelligentsia of the GDR.

Our house book has a soft cover and consists of fifteen pages which are numbered consecutively from beginning to end, out of which thirteen have blank spaces for records. On the second page there is a kind of instruction manual which informs how to use and fill in the house book. The headline “What every citizen of the German Democratic Republic needs to know about the reporting ordinance of the national police!” is followed by a number of simple questions and answers referring to the usage of the house book. In the following we have listed all questions along with a summary of the answers:

“Who needs to give report by the police and when does the entry into the house book take place?”

Citizens who are moving into an apartment need to register within three days. When moving out, the notice of departure needs to take place within three days, too. In case someone is residing in the building more than three days, the individual needs to be registered in the house book on presentation of an ID as well as needs to report arrival and departure by the police.

“Where do I need to report by the police?”

After the entry into the house book, the registration is to be carried out at the responsible national police registration office.

“How does the report by the police need to be carried out?”

In case of moving in or moving out the individual is required to give notice of departure on presentation of the house book and the ID. By moving within the same town a new registration at the local registration office is sufficient.

“The tasks of the landlord and the tenant!”

The landlord or the caretaker is required to register every person in the house book who is residing at the building for more than three days as well as to check whether the obligation to register has been carried out.

“Who is supposed to manage the house book?”

“Who is permitted to have access to the house book?”

Only members of state security agencies or persons of trust may be permitted to access the house book in case they are able to identify themselves accordingly.

“A violation of the obligation to register is a chargeable action!”

In case of not fulfilling the obligation to register both landlords as well as tenants or visitors may be charged with a fine of up to 150 Marks or imprisonment for up to 6 weeks.

The third page of the house book consists of the text of the reporting ordinance of September 6th in 1951. The page is also providing free space for the first entries. Our exemplary house book has the number 3710 and derives from the Breitestraße in Wismar in the state of Mecklenburg. According to the entries, the landlord was “Johannes V.”, the person in charge of managing the house book was called “Hans V.”. The book was started on December 14th in 1952. On the right side of the page there is a fee stamp of the German State Police amounting to one Mark. The stamp is dated from December 10th in 1952. The following pages are build up of charts and offer free space for individual-related data of the permanent residents of the building. Among this data are the individual’s name, place and date of birth as well as occupation, ID number, nationality and precise place of residence within the building. There are also columns for the signature and check mark of the state police. The last three double pages are intended for registering visits. This also includes recording the person’s name, date and place of birth, permanent address, ID number and nationality. There are furthermore columns for the expected length of the visit, when the state police has been notified as well as who the guest is staying with. Our exemplary house book has been used between 1952 and 1966 which can be read from the dated entries. The layout of the house books has changed over the years. In the beginning the DIN A4 format was used, later it was changed to the A5 format. In order to pay attention to the rising space requirements the smaller format consisted of up to 64 pages instead of the former 15 of the books from the 1950s.

Benefits of the house book

We will now conclude by answering the last question “What was the benefit?”. For the state, the house book was an instrument of control and surveillance of its citizens. As needed, the house books could be used to get information about who has been visited how often and by whom. This data was used for operational investigations of government bodies in order to be included in the files of the inquiry of the state police or the “Operational Procedures” by the Ministry for State Security. 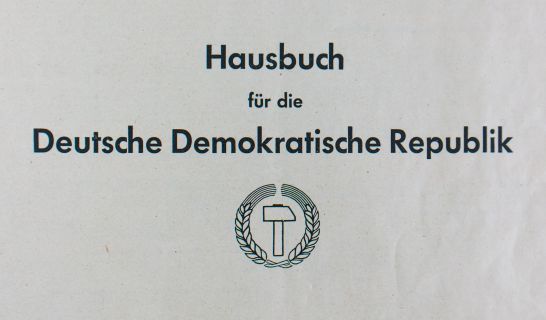 Storming the Stasi: Memories of 15 January 1990