In order to satisfy their daily consumer needs, the citizens of the DDR / Soviet occupation zone had a number of possibilities to do their shopping. Already in December of 1945, a consumer cooperative with the simple name of “Konsum” was established. Only three years later, almost 300 independent consumer cooperatives existed in different cities.
by Admin (30 Nov 2016)

In order to satisfy their daily consumer needs, the citizens of the DDR / Soviet occupation zone had a number of possibilities to do their shopping. Already in December of 1945, a consumer cooperative with the simple name of “Konsum” was established. Only three years later, almost 300 independent consumer cooperatives existed in different cities. The German Consumer Cooperative Union (German: Verband Deutscher Konsumgenossenschaften / VDK) had the task to satisfy the needs of the population, covering as large an area as possible and establishing as low prices as possible. The selling organizations were substantially different. There were larger stores and supermarkets called “Kaufhalle”, whereas village consumer cooperatives dominated more rural areas. There were also Konsum shops adjacent to larger factories which were gladly used by the shift-working employees. For the villages which did not have a Konsum at their disposal there were selling busses which delivered groceries to the inhabitants of the village. In the 1950s, there was even a Konsum-ship called “Kambala” for the inland sailors in the DDR. Since 1954, Konsum stamps were given out as trading stamps. Like that, members of the consumer cooperatives were able to receive an annual refund for a part of their turnovers at the selling organizations.

In the mid-1950s, the cooperative already had more than 3 million members. The phrase “to go to the Konsum” is dating back to this time period, meaning that a person is going to shop for groceries. Along with the fast growth in the 1950s, a strengthening of the brand followed as well. In 1959, the graphic designer Karl Thewalt created a specific logo for the cooperative. An industrial chimney along with a curved sickle is representing a capital “K”. The logo was put up on the roofs of the shops or onto the facades of the building – an illuminated advertising which could be seen from far away. The illuminated sign on the photo below is belongs to our collection.

The consumer cooperative was not only limited to selling points. The Konsum chain of stores consisted of more than 150 companies, 28 of which were directly subordinate to the Consumer Cooperative Union. A large amount of the products in the shops was produced in the according companies. In addition to the own companies and production facilities there was also a net of Konsum restaurants which mostly processed the goods of the Union-owned factories and represented an additional option on the gastronomic market. Some of these restaurants were leased to private innkeepers.

In the late 1980s, the consumer cooperative had a total of about 4,5 million members. Since it was a private business, the company did not fall into the area of responsibility of the Trust Agency during the Peaceful Revolution. Along with the Reunification, the German Cooperative Societies Act was the legal frame since October 3rd, 1990. The 200 single Konsum cooperatives merged on a regional level and formed 55 regionally active Konsum cooperatives. Some of these regional unions have survived until today and are running their own sales branches. 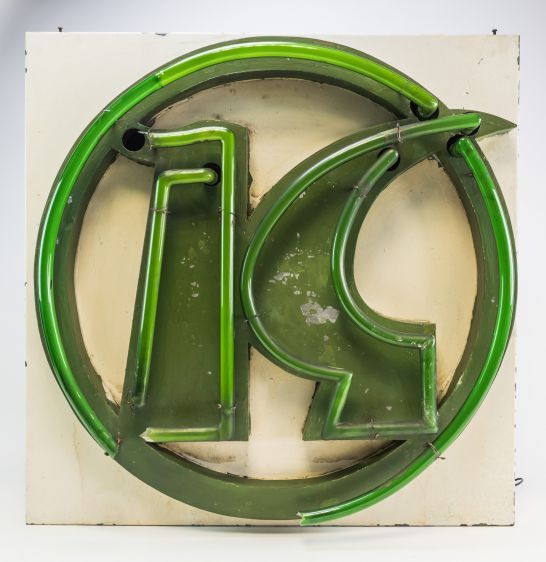 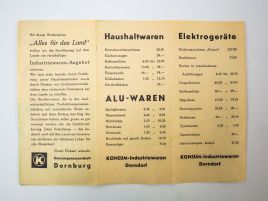 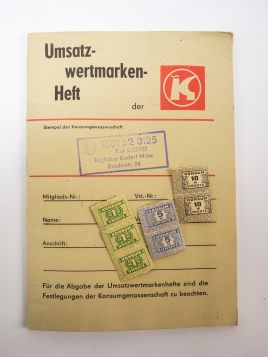 Shops and Department Stores in the DDR