The new edition of the 0-Euro souvenir banknote is here! On the occasion of the 50th anniversary of the 10th World Festival of Youth and Students in the GDR, we have developed a design with these festivities in mind. by Alexandra de León (9 Nov 2022)

The new edition of one of the most popular souvenirs of the DDR Museum is finally out! The new 0 Euro souvenir banknote is now available. The note, which was developed with the European Central Bank, has its roots in France and has been printed on security paper by the French security printing house »Oberthur« since 2015. The familiar security features, such as the individual serial number, the watermark, the copper strip and the hologram, also make our souvenir banknotes look strikingly authentic - if it weren't for the large zero printed on them. The imprint "DDR Museum - Berlin" also prevents any serious confusion. 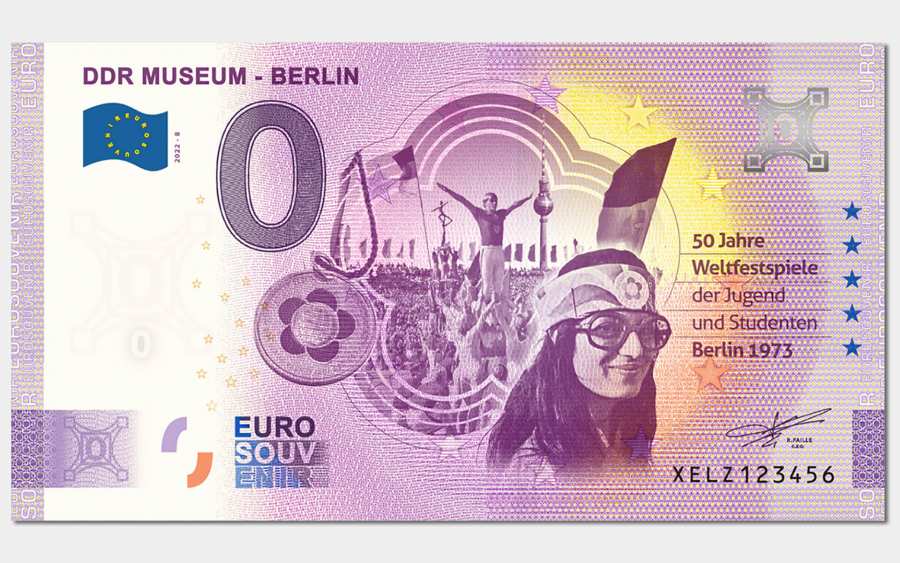 On the occasion of the 50th anniversary of the tenth World Festival of Youth and Students, which is due to take place in 2023, we have developed a design for you that picks up on these festivities. Initiated by the internationally active and communist World Federation of Democratic Youth (WFDY), the World Festival took place for the second time in East Berlin in 1973. The nine-day event, which welcomed around eight million spectators and 25,600 visitors to Berlin from 140 countries, began on 28 July. The whole city became involved and many people responded to the call to accommodate tourists in their homes. Even holiday periods were suspended in preparation for the festival with the intention of proving how cosmopolitan and modern the GDR was. While Western headlines joked about the »Woodstock of the East«, with the festival having taken place not too long after the Woodstock Festival, the SED government took this foreign policy production very seriously. Sport was recognised as a means of achieving international recognition, and so the controlled development of popular sports was promoted early on in the GDR.

While GDR bands as well as international musicians were given the chance to perform in front of an audience on 95 concert stages, more than 2,000 arrests were made in the surrounding area of Märkisch (the marches). The remarkably free hand that the organisers, the WFDY, were granted by the SED government created a situation in which freedoms were granted that otherwise hardly existed in the GDR. For example, for the first time since the SPD’s forced unification with the KPD, the Juso leader Wolfgang Roth was allowed to give an uncensored public speech in the name of his party.

Our souvenir note captures the exuberant atmosphere of the World Festival. The delight of the athletes proudly presenting their skills to the masses can be seen in the foreground and, in the background, the television tower - the landmark of Berlin. Collectors already know the back of the souvenir voucher, on which some of Europe's most famous landmarks are united: the Torre de Belém in Lisbon, the Eiffel Tower in Paris, the Colosseum in Rome, the Basilica Sagrada Família in Barcelona, the Manneken Pis in Brussels and, of course, the Brandenburg Gate in Berlin. On the right, the well-known and unmistakable face of the Mona Lisa shines through. 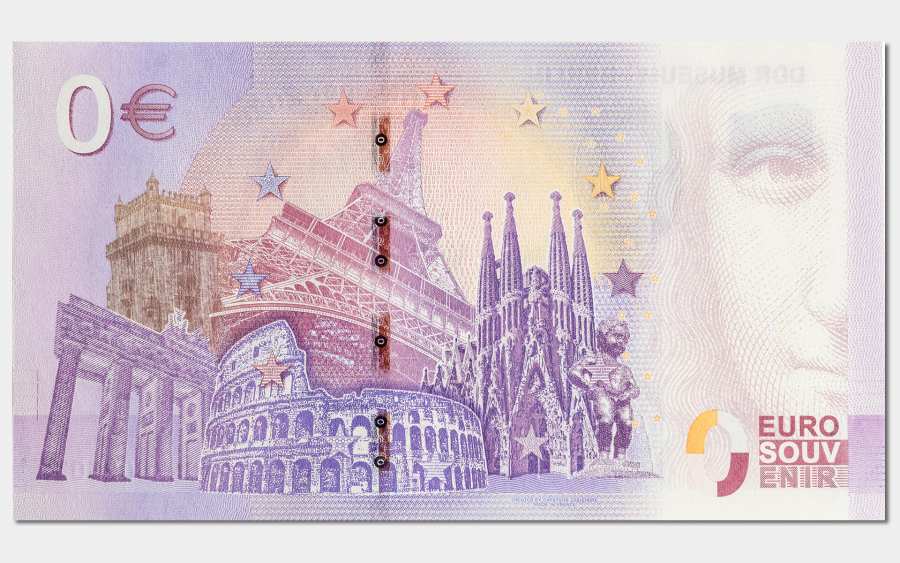 The zero-euro note is now only available at the vending machine in the museum shop and in the online shop of the DDR Museum. Once again, the edition is limited to only 10,000 pieces. The souvenir notes are in great demand. Although they may not have monetary value, they certainly have real collector’s value.

All other versions of our 0 Euro souvenir banknote 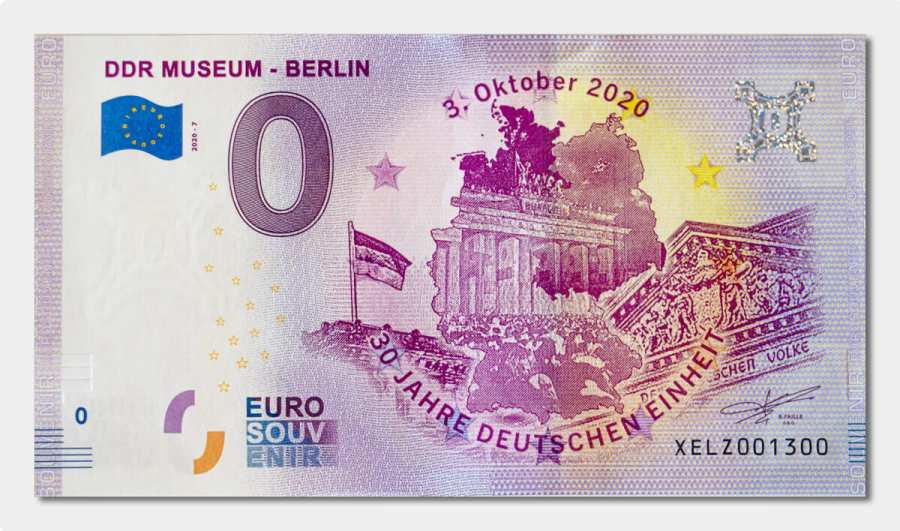 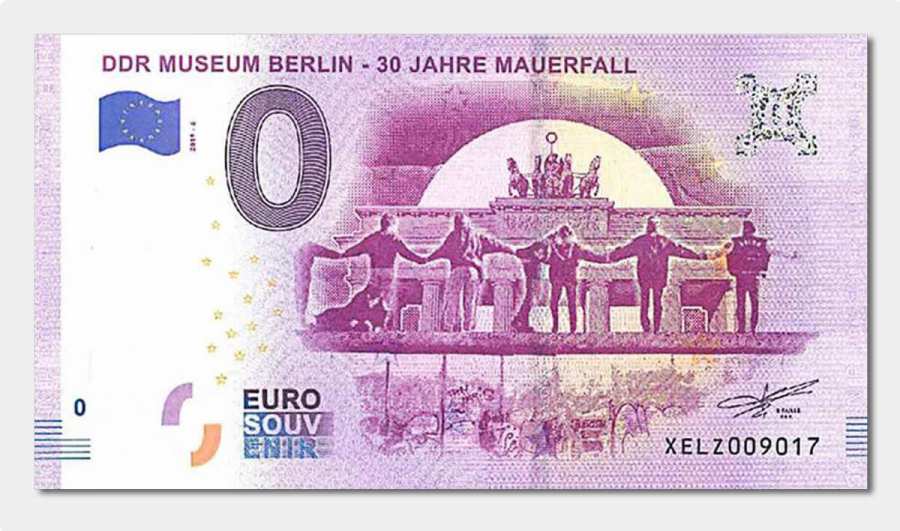 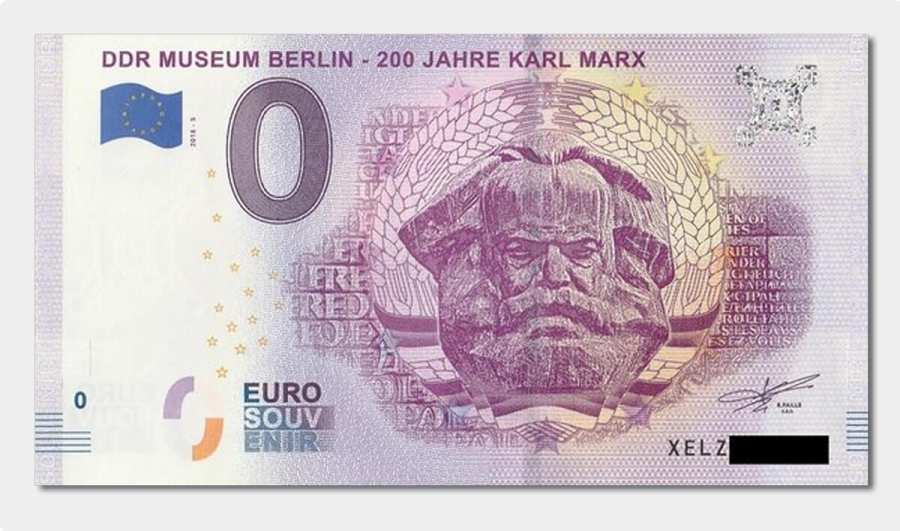 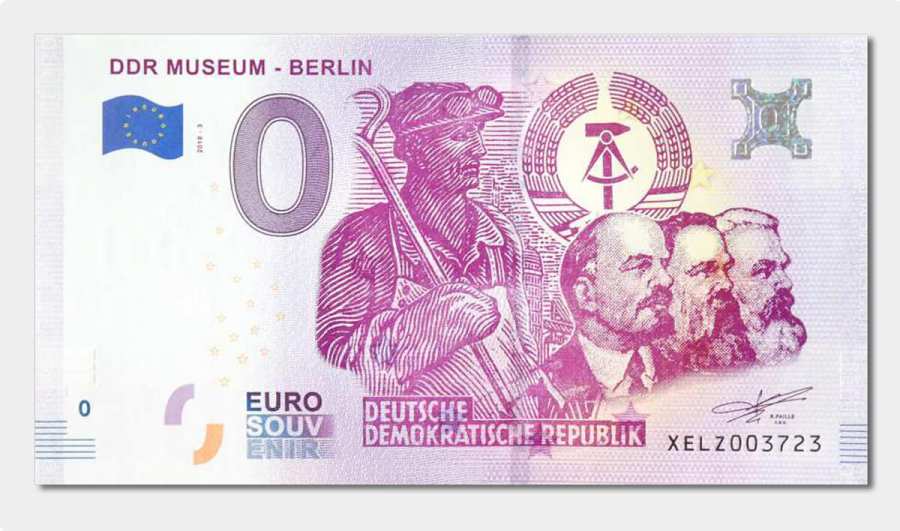 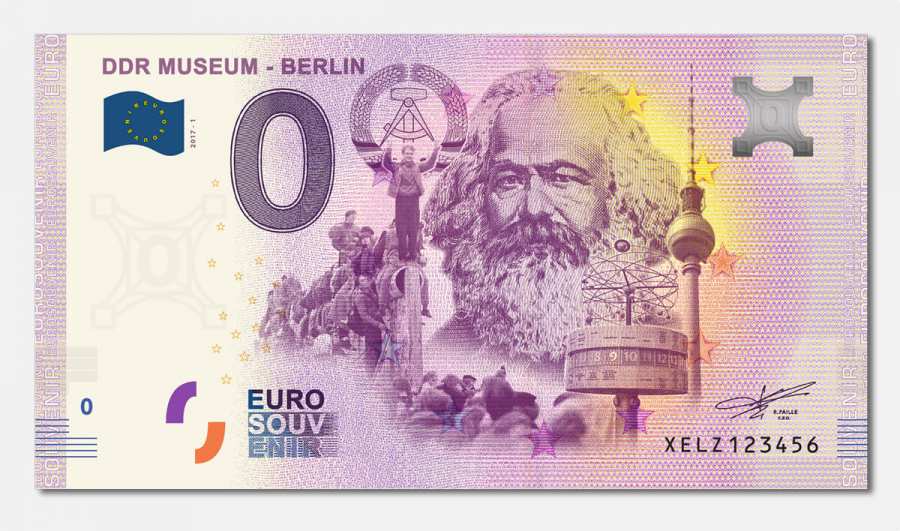 Meeting of the participators of the "Long Night of the Museums"

Have you been to the DDR Museum? Please tell us your opinion!

A question from a British artist: How did social cohesion look like in the GDR?