First held in Prague in 1947, the World Youth Games seem like a Cold War phenomenon, but the leftist World Federation of Democratic Youth, which organises the Games, is still active today. In this blog post, we focus in particular on the two festivals in the GDR. (27 Jul 2022)

The birth of the World Festival

The World Federation of Democratic Youth (WFDY) was founded in 1945 in the wake of post-war shock and Soviet interest in an international socialist youth movement. Anti-fascism provided the opportunity to integrate various youth organisations - including bourgeois and social democratic ones - into the »united front from above« envisioned by the Communist International as early as 1935. 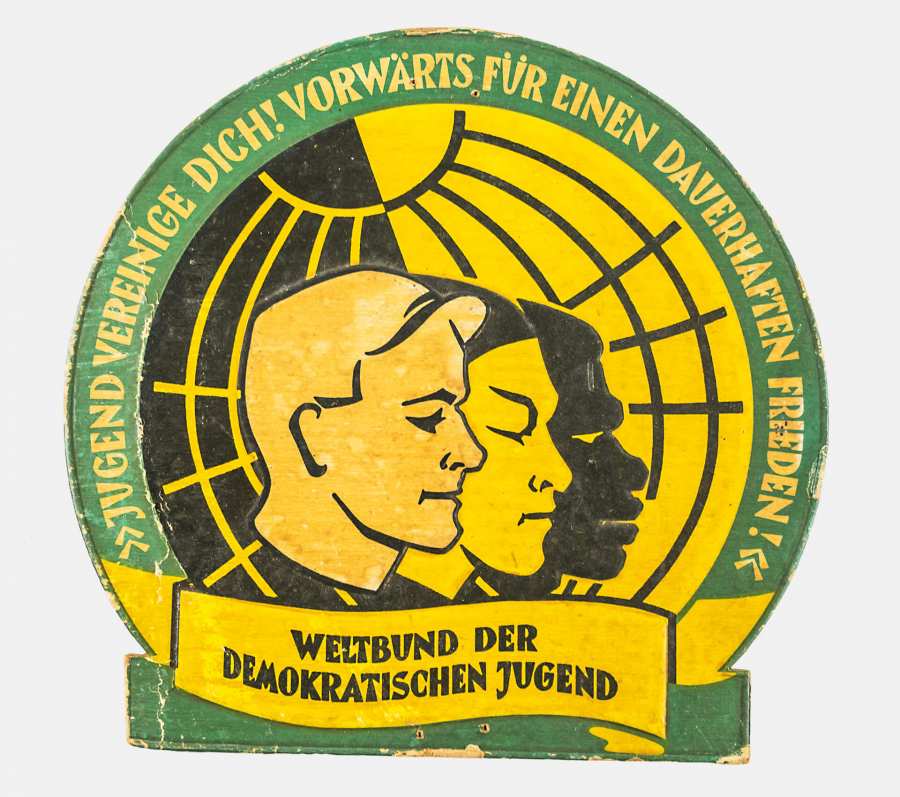 The 1947 World Festival in Prague

The potential for conflict brought about by the leftist Youth Games became clear through the first World Festival in Prague in 1947. Within the international left, but also within the communist bloc, no agreement at all was made about the agitation against the Marshall Plan. This disagreement and a varied programme of discussion forums, public youth meetings, music, film and dance events remained permanent components of the festival, even to the present day. Following the festival, the first Western youth and student associations left the WFDY, as well as the co-organiser, the International Union of Students (IUS). The French government expelled the WFDY secretariat in 1951, which then settled in Budapest.

The Hungarian capital had already hosted the second World Festival in 1949, which, like the one that followed in Berlin in 1951, was marked by Stalinism and paid homage to the socialist cult of personality. The first Berlin crisis, the blockade of West Berlin by the Soviet Union between 1948 and 1949, also brought the left-wing festival into disrepute with Western youth organisations.

The 1951 World Festival in Berlin

The GDR wanted to present itself as an exemplary socialist state to the entire world and did so by hosting the third World Festival in the capital city of Berlin in 1951, which was not without a cult of personality. Around 26,000 guests from 104 nations came, as well as various guests of honour, such as the writers Pablo Neruda and Martin Andersen Nexö.

The supply situation in the East was difficult, however, and many were drawn to the western part of the city, where soup kitchens, youth shelters and the free distribution of cinema and theatre tickets, magazines and books were very popular. The governing mayor of West Berlin, Ernst Reuter, had invited young people and students to visit the western sectors, even though East Berlin had temporarily cut off S-Bahn and U-Bahn connections. Erich Honecker, then chairman of the youth organisation Free German Youth (FDJ), responded by marching 10,000 members of the FDJ into West Berlin, who clashed with the police there. 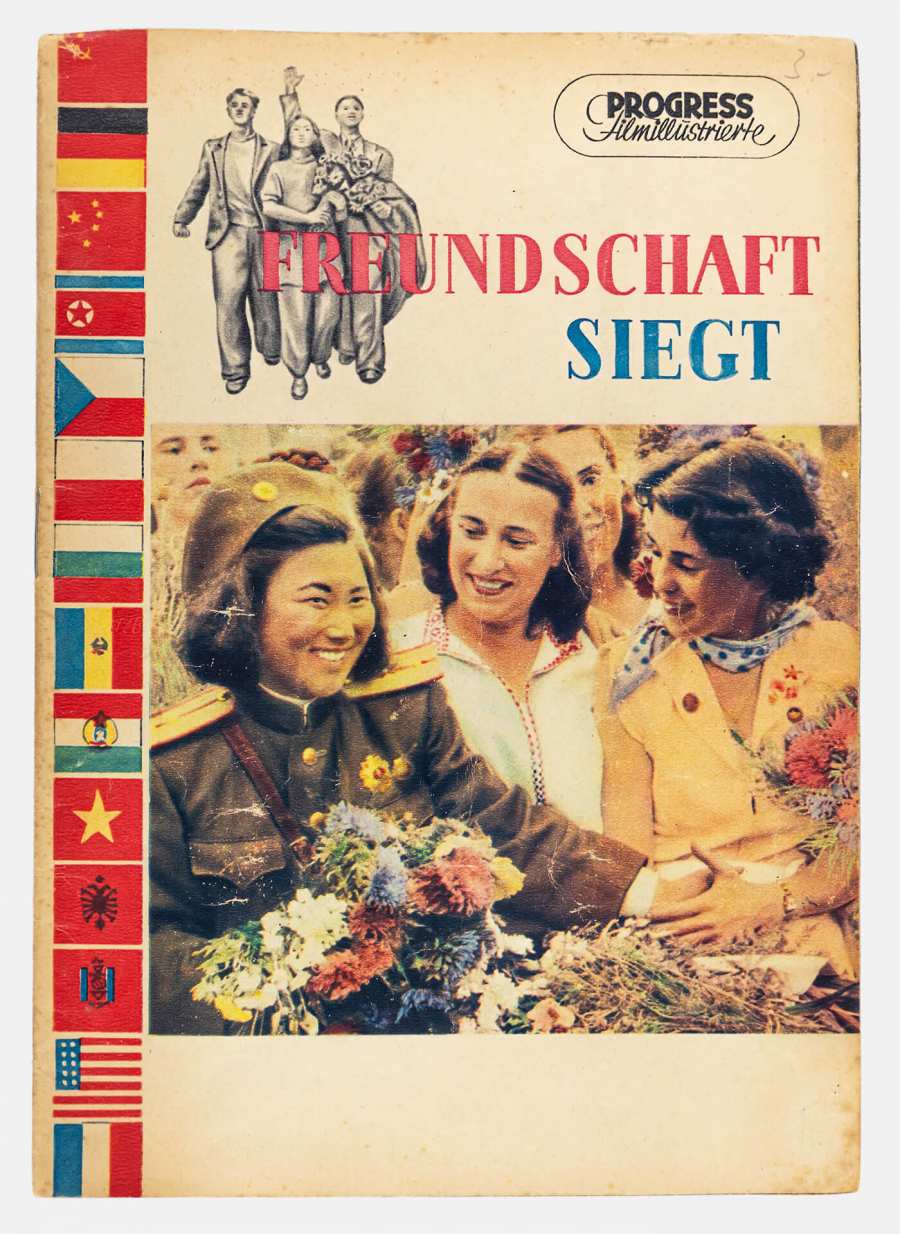 Longing for peace and coexistence after Stalin's death

In the same year, the Federal Republic classified the Western FDJ as anti-constitutional and banned it, preventing numerous young people from leaving for the GDR to take part in the World Festival. In contrast, the 1953 World Festival in Warsaw and the 1957 World Festival in Moscow were already marked by a »thaw« and de-Stalinisation. Young people officially spoke out in favour of peaceful coexistence between East and West, and the Germans also participated in the festivals as joint delegations. However, at what was probably the largest World Festival in Moscow with about 34,000 foreign participants, the two states started to become distant again.

The World Festivals in Vienna, Helsinki and Sofia

The West’s attempt to remove itself from the international festival tradition became evident in Vienna in 1959 – the first World Festival in the West. The number of participants had almost halved and the Viennese press decided against coverage. Then, in 1962, Helsinki saw the first break in the continuous festival tradition, as African countries were unable to hold the planned games due to civil war and coups. It was not until 1968, the year of the Prague Spring, that international youth came together again in the city of Sofia. Young people began leading both formal and informal political discussions against the backdrop of the Prague Spring, the student movement and the Vietnam War. The clashes in Prague and the solidarity of many student groups with the reform movements overshadowed the otherwise peaceful celebration. Two weeks later, troops of the USSR occupied Prague.

The 1973 World Festival in East Berlin

In the summer before 1973, Berlin became the host of the World Festival of Youth and Students for the second time. From 28 July to 5 August, 25,600 official participants from 140 countries met and over 8 million people visited the capital of the GDR during these 9 days. The central organ of the SED, the newspaper »Neues Deutschland«, headlined the opening day: »Powerful commitment of world youth to solidarity, peace and friendship«. The Western press called the festival the »Woodstock of the East«.

For entertainment during the festival days, there were various demonstration events, including the large-scale rally »The youth of the GDR greets the youth of the world«, and 95 concert stages where singing clubs, rock and beat groups performed. The spectrum on offer was very diverse, with bands and performers mainly from the GDR. However, there were also musical contributions from other countries. 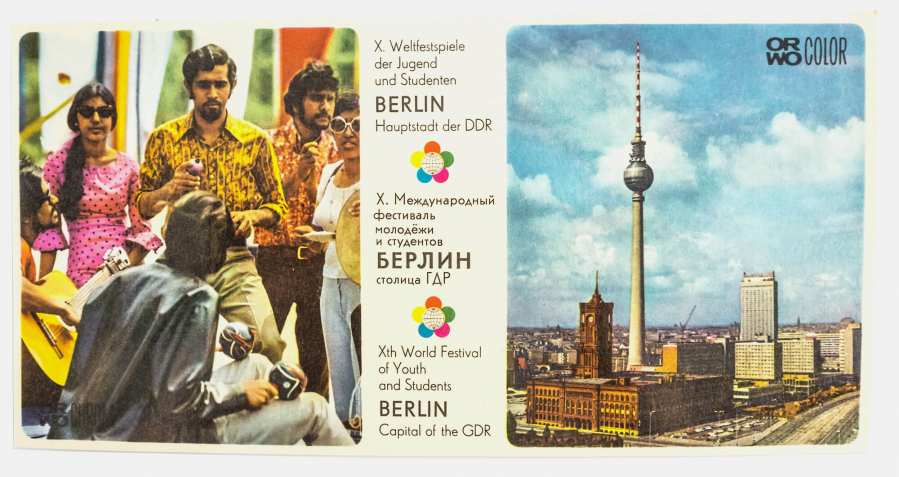 The 1973 World Festival in the DDR Museum's collection

The DDR Museum houses a particularly large number of objects from these games in its collection, such as a poster printed on linen with a centrally placed festival flower and the text »X. World Festival of Youth and Students - Berlin 1973 - Capital of the GDR«. Unique to the object below are the 71 autographs of artists who performed in Berlin during this period. Included are signatures from, among others, the Pudhys, Frank Schöbel, and the Oktoberklub. 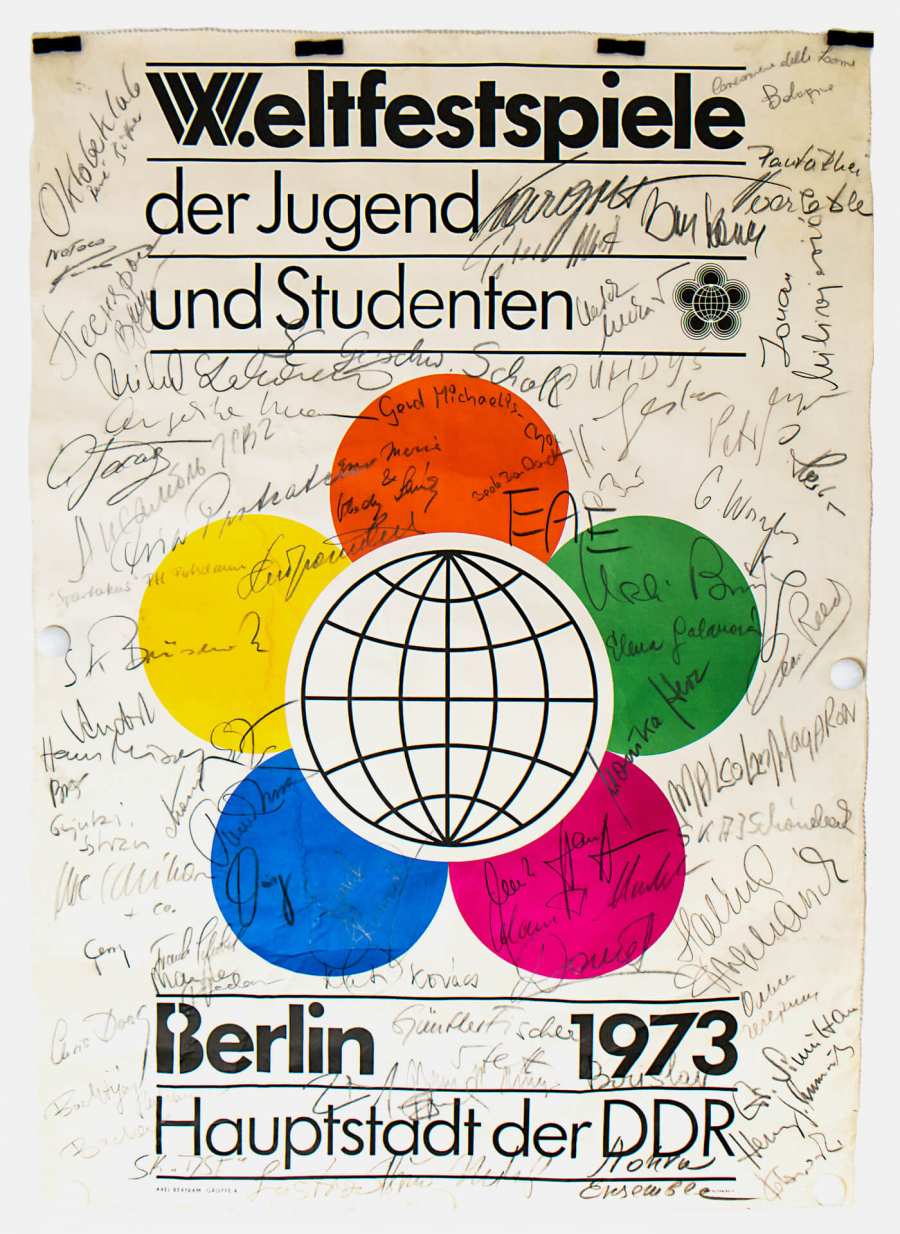 Since the number of guests exceeded the accommodation capacities of East Berlin hotels and guesthouses, many were accommodated by private families. The organisers tried to encourage Berliners to participate by means of appeal and campaigns. On 8 January 1973, the Neues Deutschland newspaper wrote about one of these campaigns: »WEISSENSEE. Young people from Cottbus and Frankfurt (Oder) will live in this northeastern district of the capital for the festival. In order to secure accommodation for their friends, FDJ members from both districts played music with marching bands from Forst and from the gas combine Schwarze Pumpe. 3,000 Weissensee citizens collected declarations of readiness from many families on both days«.

In recognition of their »exemplary hospitality«, selected hosts were presented with cast iron plaques after the festival. On the right side is the familiar, colourful logo of the World Festival, on the left the lettering »World Festival of Youth and Students / For exemplary hospitality / Capital of the GDR Berlin 1973«. There are four holes at the corners of the plaque for mounting. Our plaque shows clear signs of use, as it was exposed to varied weather conditions over two decades. 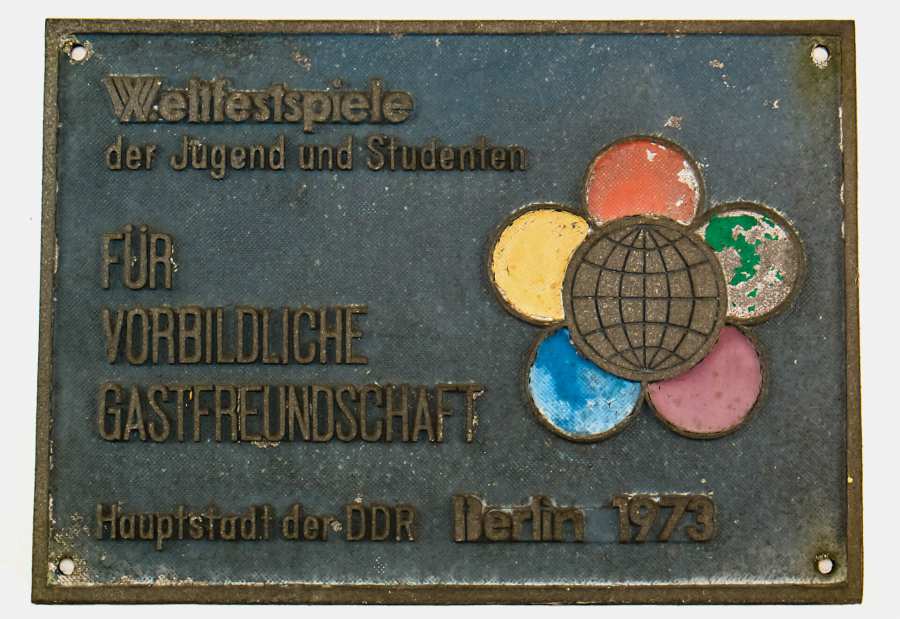 After 1973 and following the collapse of the so-called Eastern Bloc in the early 1990s, further World Youth and Student Festivals were held at irregular intervals around the world, but mainly in socialist/communist countries. The most recent festival was held in 2017 in Sochi, Russia.

The World Federation of Democratic Youth remains active today and is recognised by the United Nations as an international, non-governmental youth organisation.

Objects on the World Festival in the DDR Museum's collection 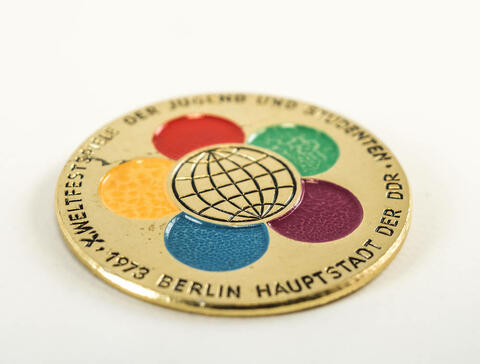 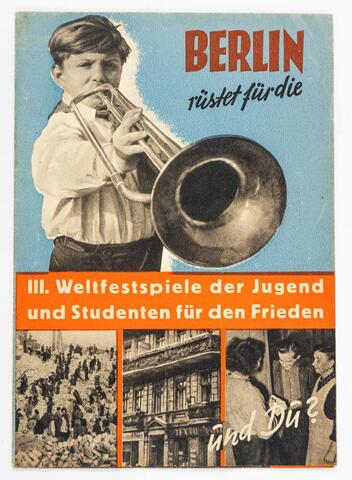 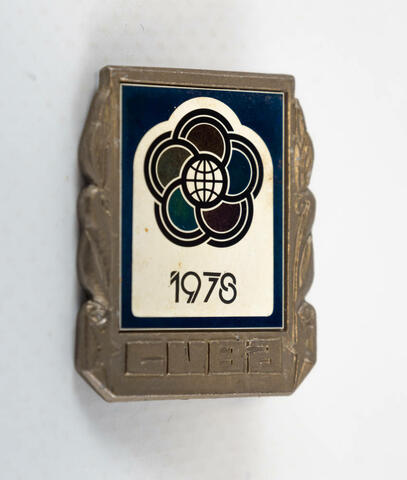 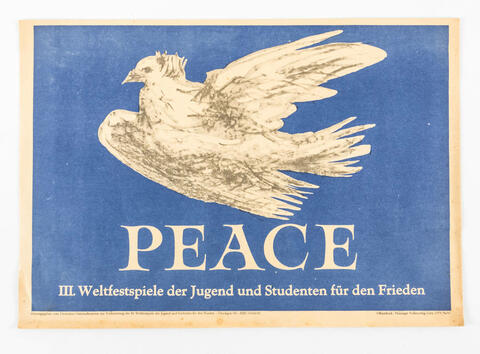 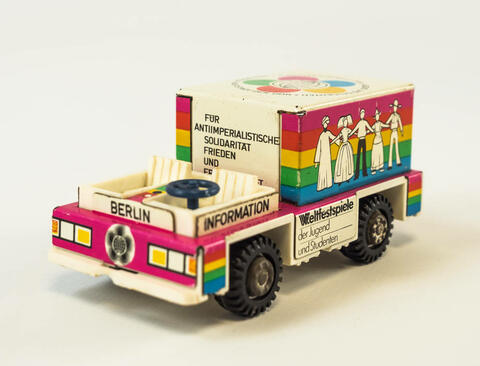 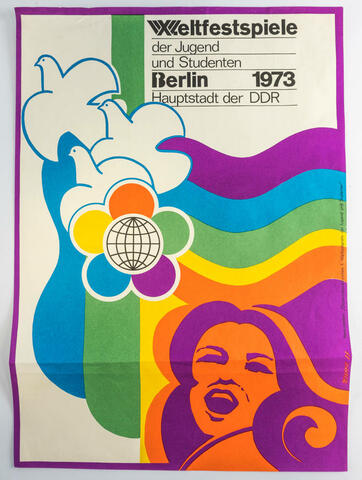 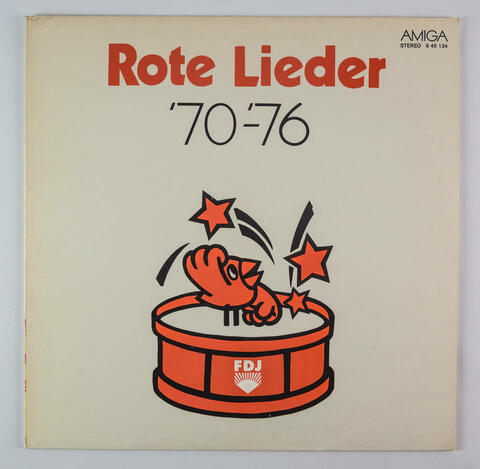 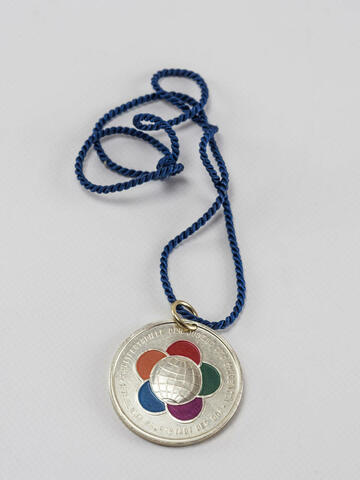 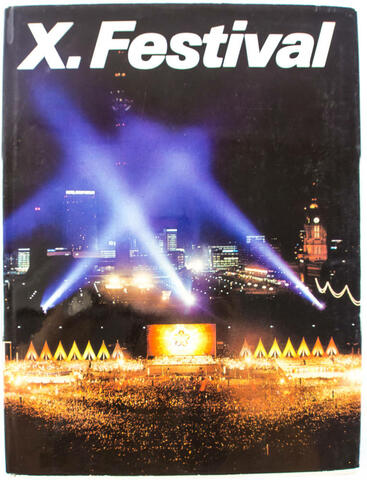 You can find more objects on this topic in the DDR Museum's collection here.