The Soviet magazine "Sputnik" (Russian for companion) has been published by the state-owned news agency "Nowosti" since January 1967. It was designed as a digest of the Soviet press and was not only adressed to Russians but also to readers from other socialist and western foreign countries.
by Admin (8 Jun 2016)

The Soviet magazine "Sputnik" (Russian for companion) has been published by the state-owned news agency "Nowosti" since January 1967. It was designed as a digest of the Soviet press and was not only adressed to Russians but also to readers from other socialist and western foreign countries. Therefore the magazine was translated into different languages such as Danish, English, Finnish, French, Greek, Portuguese, and of course German. It was available both in the Federal Republic of Germany as well as in the GDR.

The content of the small and colorful magazine was just as diverse as the different countries it was available in. Topics of all sorts such as politics, science, culture and society in the USSR were discussed. The main concern of the agency "Nowosti" was to illustrate the cultural diversity as well as the climatic and geographic differences within the Soviet Union. The otherwise commonly used socialist rethoric was deliberately omitted by the editorial office in order to satisfy the needs of the target group of western readers. Articles which were slightly critical of the system were therefore also part of the publication.

Quality-wise the magazine was setting new standards, colorful photographs were shown alongside the articles. Shiny luster paper from Finnland was used as well as even Finnish print offices such as the companies "Kursivi" or "Sanomaprint". No wonder: With an edition of  more than half a million copies per month, the Soviet capacities would soon have been exhausted. Of course it was also intended to live up to the higher quality standards of the Western readers with the help of the cooperation with Finnish print offices.

Along with the Glasnost and Perestroika politics of Michail Gorbatschow, the critical coverage of "Sputnik" increased. For the first time, open criticism was directed towards Stalin, the personality cult in the socialist system or "diagreeable" historical events such as the German-Soviet nonaggression pact from 1939. This new frankness caused severe irritation among the leadership circles of the GDR. Worried about the own view of the world, the distribution of the "calcitrant Sputnik" was prohibited by the GDR-leadership on November 18th in 1988. Like that, the doctrine of the "unbreakable friendship with the nation of the Soviet Union on all levels", which had been propagated for decades, was ignored. The virtual ban of the "Sputnik" caused for a lot of resentment among the society and acted as a catalyst for the opposition movement in the GDR. A year later, "Sputnik" was sold again in East-German newspaper stands. The censored editions of the previous year were released in a special edition for the East-German readers in November 1989.

Along with the breakup of the Eastern Bloc, the magazine disappeared into irrelevance in the 1990s. 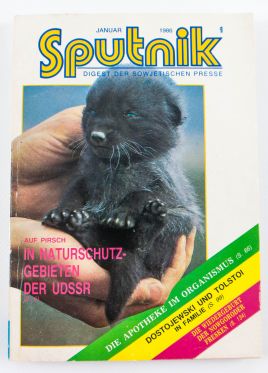