Dresden was one of the economic and cultural centres of the GDR. The collection of the DDR Museum contains numerous objects that reflect the historical development of Dresden. Ten of them are presented in this article. by Frank Meißner (8 Sep 2020)

Dresden was one of the economic and cultural centres of the GDR. As the city was badly damaged during the Second World War, the 1950s and 1960s were mainly devoted to its reconstruction. Tourism, which was important for Dresden, took a long time to recover, as did industry and culture. Large baroque buildings were renovated, ruinous buildings were demolished and replaced by modern buildings. The handling of the rich cultural heritage of Dresden's past, pre-socialist epochs was often influenced by an ideological dimension.

The collection of the DDR Museum contains numerous objects from Dresden, which both reflect the development of the city and tell its GDR history. Ten of these artefacts are presented below.

The foundation stone for the Dresden television tower was laid in summer 1964. It was opened on the 20th anniversary of the GDR on the 7th of October 1969. Situated on the slopes of the Elbe in the Dresden district of Wachwitz, it is visible from afar at a height of 167.15 m and quickly became a landmark of the Dresden Elbe Valley.

Apart from a guest area with restaurant and viewing platform, its purpose was mainly of a technical nature: In the Dresden conurbation, terrestrial broadcasting of radio and television was made difficult by the geographical location in the Elbe valley basin. The tower solved this problem. The often used mocking designation of the area as the »valley of the clueless«, on the other hand, was due to the fact that no western television could be received in the valley location so far to the east of Saxony.

This pen in the form of a model of the Dresden television tower could be bought as a souvenir in tourist shops in Dresden. 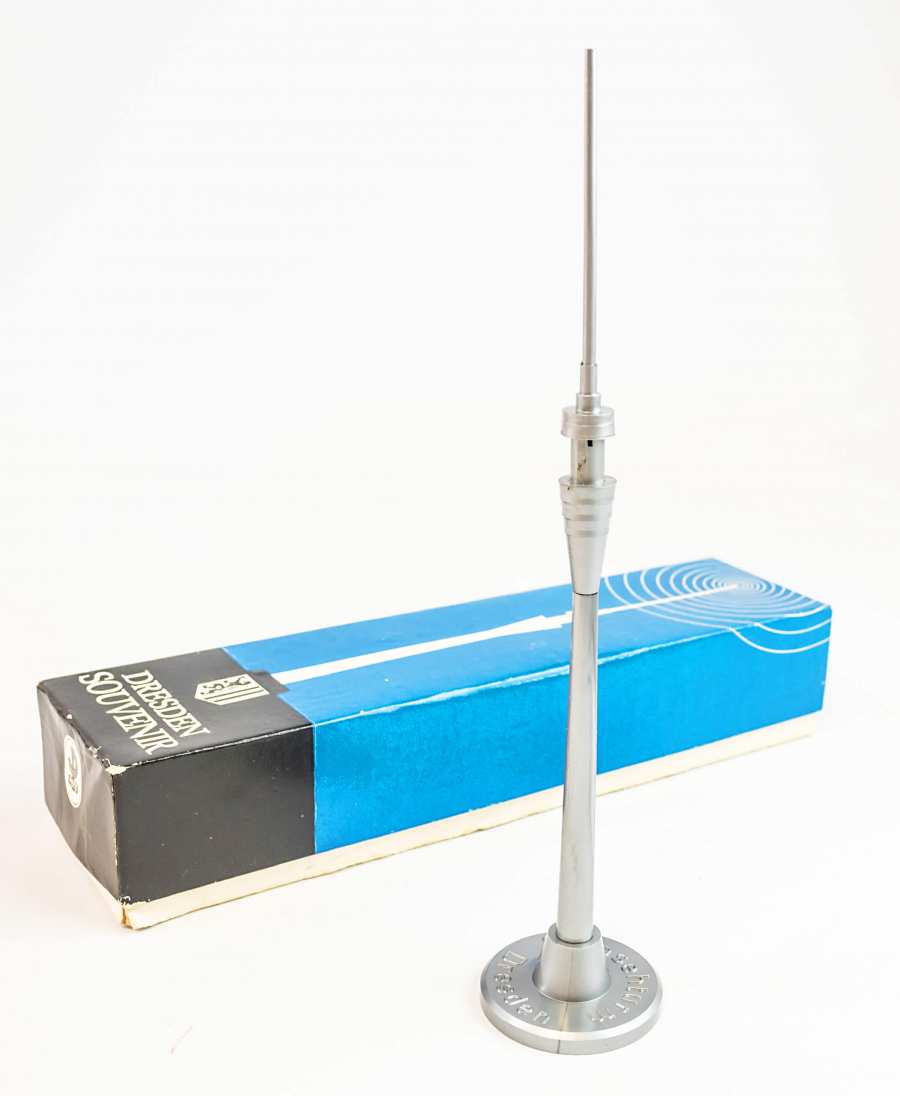 Dresden was the seat of one of the most important combines of the GDR, the VEB Kombinat Robotron, which emerged from the VVB Datenverarbeitungs- und Büromaschinen in 1969. Under this futuristic name, the main task of the combine, which was dissolved by the Treuhandanstalt in 1990, was the manufacture of electronic and computer products. In addition to mainframes and small computers, it also produced the »Erika« typewriters and the »Combi-Vision 310« television set: the first portable television set made in the GDR in 1975.

The »Combi-Vision 3101«, based on this predecessor, was presented at the Leipzig Autumn Fair in 1976. The model had a station memory with six programme positions and was available in the colours white, red and yellow. 153,590 units of it were produced by VEB Robotron Elektronik Radeberg near Dresden. 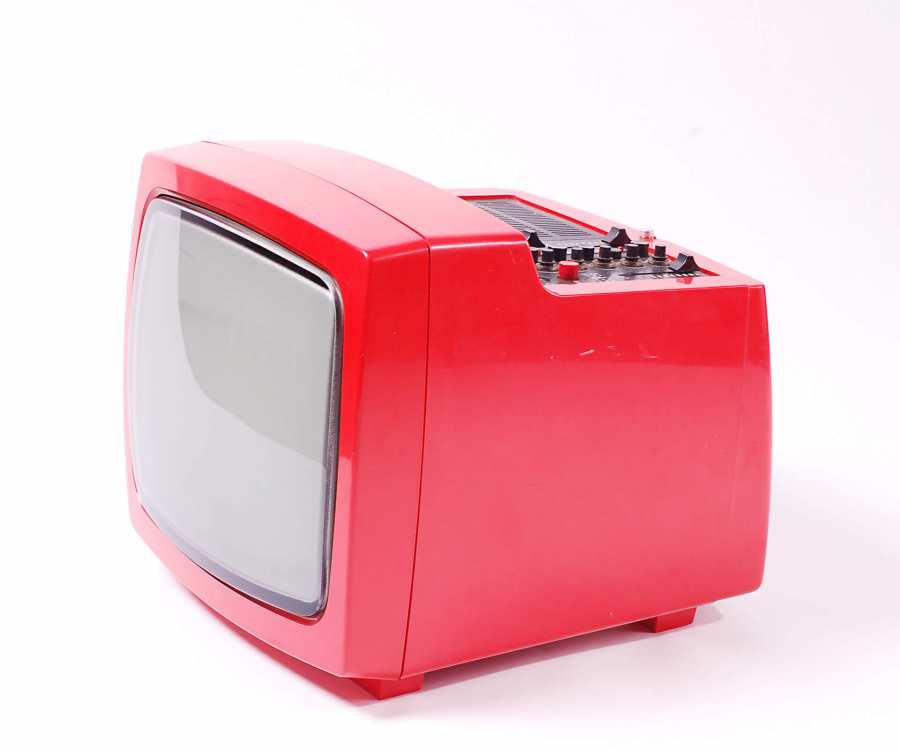 The HO restaurant »Am Zwinger« was built between 1965 and 1967 opposite the eponymous baroque building complex of the »Dresden Zwinger« in the city centre. The Sophienkirche, which was severely damaged in the Second World War, was demolished on the same site. The building, popularly known as the »Fresswürfel«, was one of the largest gastronomic establishments in the GDR with 1,416 seats. It housed a barbecue bar, the Radeberger Bierkeller, the »espresso« café with outdoor terrace, a self-service restaurant and the dance café on the upper floor. The building was only partially demolished in 1998 and finally demolished in 2007.

This menu card of the Tanzcafé from 1969 lists drinks and food at upscale prices. 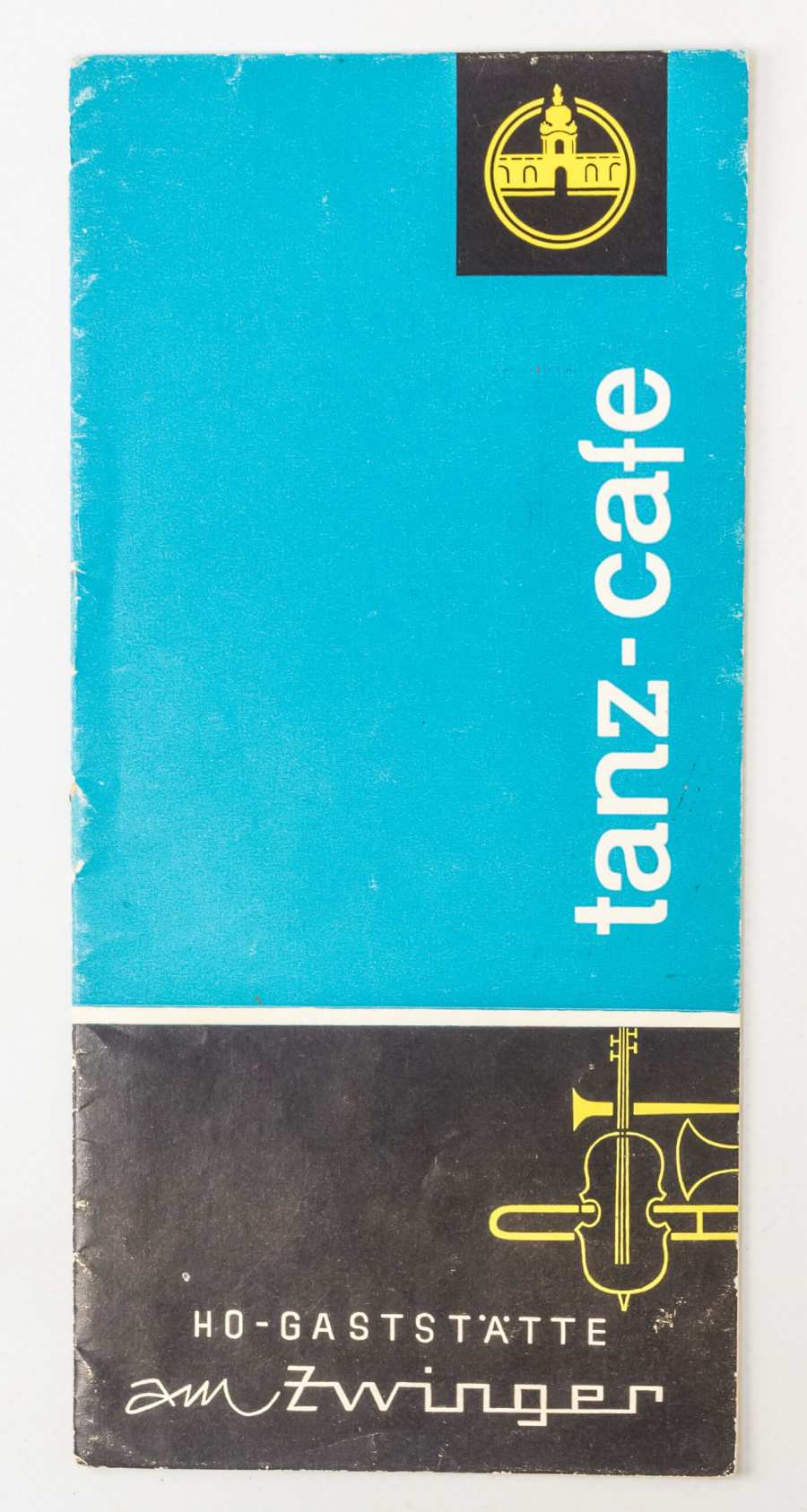 One of the most famous products from Dresden is the hazelnut spread cream »Nudossi«. It was produced from 1970 onwards by the private Vadossi KG chocolate and sugar confectionery factory in Radebeul, which was, however, affiliated to the VEB Dresdner Süßwarenfabriken Elbflorenz as early as 1972 as part of expropriations. »Nudossi« was sold in the shops of the »delikat« chain. Since 1999 the spread has been restored after production was discontinued in the course of the reunification.

This empty tin with lid made of red plastic dates back to 1978. 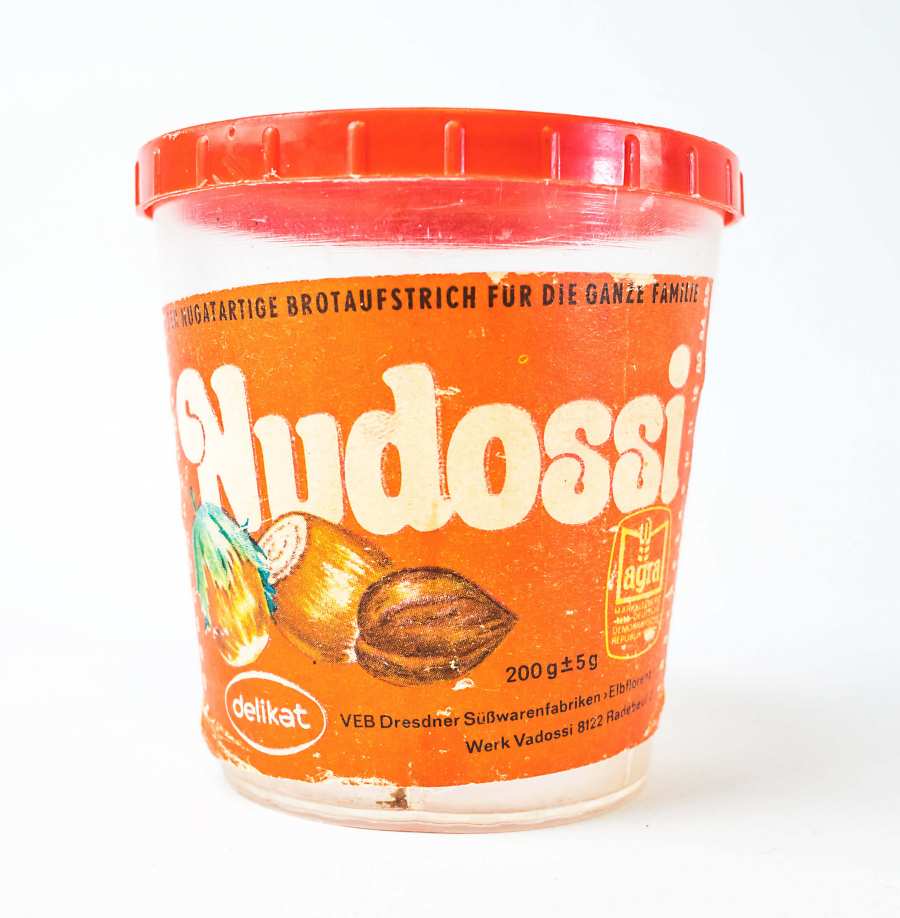 The Dresden Semperoper was built between 1838 and 1841 as the opera house of the Court and State Opera of Saxony. In 1977 reconstruction began on the building, which was damaged in the Second World War and in part burned out, after years of vacancy and security work. Apart from a few interior renovations, the original designs by Gottfried Semper were retained. The new building was inaugurated on the 13th of February 1985 with a large ceremony in the forecourt with international guests and a performance of »Freischütz« by Carl Maria von Weber. In his opening speech, Erich Honecker stressed the importance of the rebuilt opera house as a peace project. This mini-book from 1985 entitled »Dresden Opera« shows colour photographs of the new opera house. 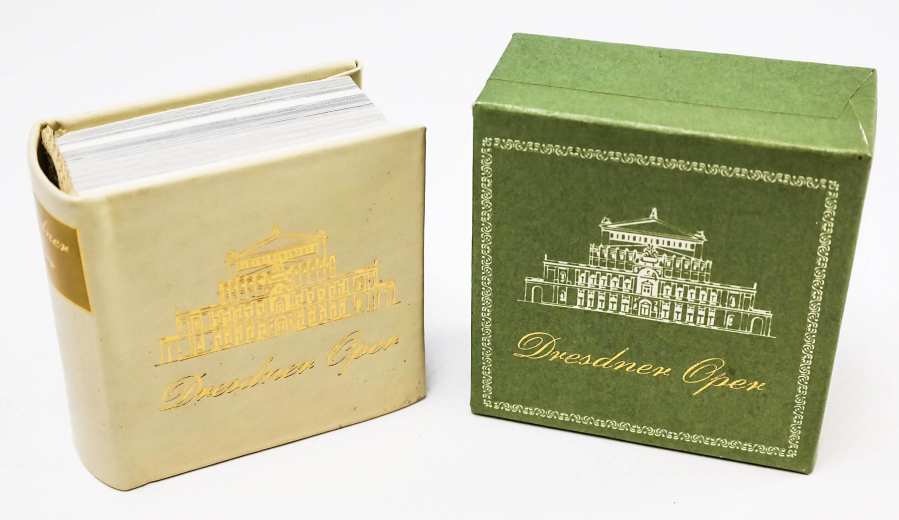 One of Dresden's most famous museums is the Deutsches Hygiene-Museum, founded in 1912. In the GDR, the main task of the museum was health education and training. The comic figure »Kundi« served as a mascot for health education for children. It was designed in the 1950s by the draughtsman and author Richard Hambach. In animated films of the DEFA, in magazines, illustrated brochures and promotional items, the figure conveyed the basics of health and hygiene in a child-friendly way. His magic telescope helped him to check whether hygienic rules were being observed. Because of the possible negative association of such »surveillance« with the practices of the State Security, the Hygiene Museum separated from »Kundi« after the fall of the Berlin Wall. 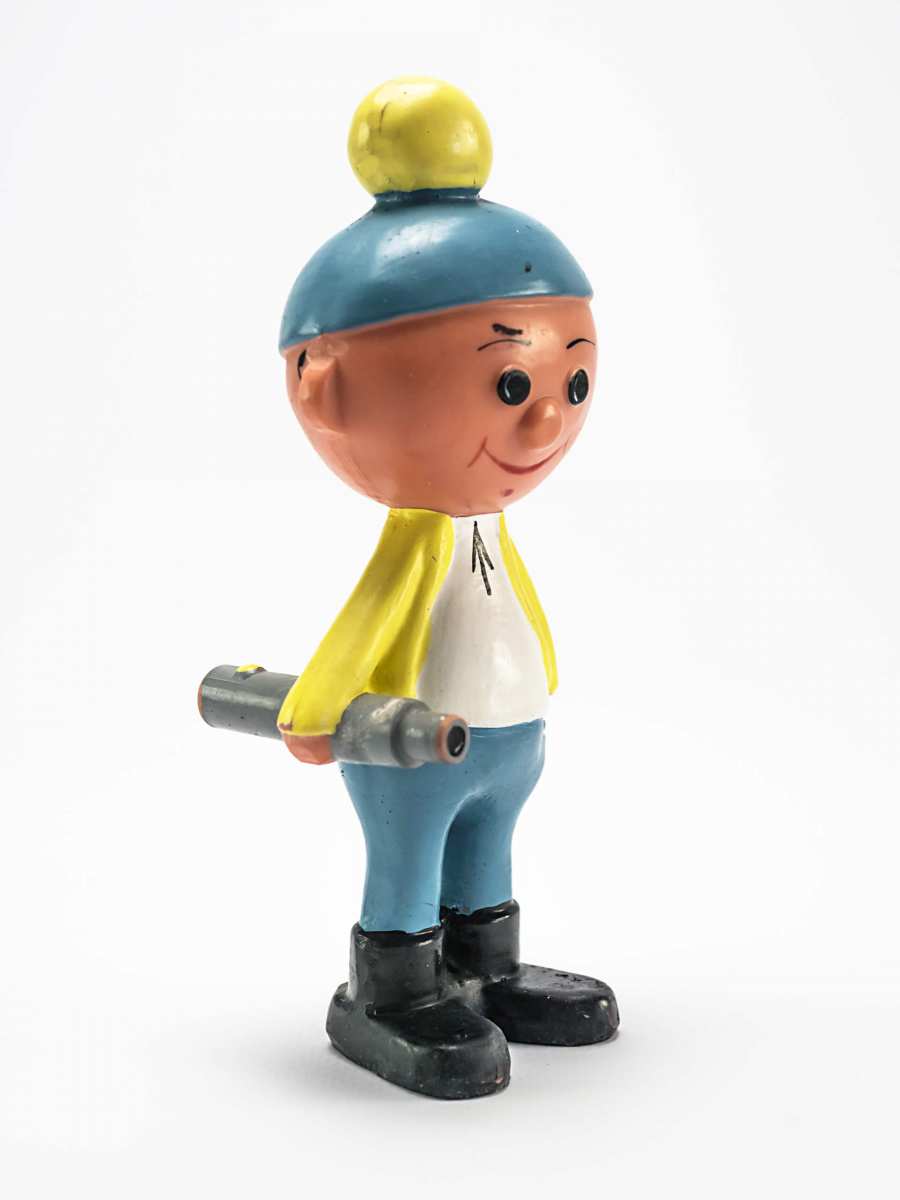 Dresden was already a popular tourist destination in GDR times. Even though the state looked critically at the monarchist epochs, there was no getting away from Dresden's cultural treasures when it came to promoting the city as a tourist destination. The main attraction was the city's Baroque heritage with its large buildings from the reigns of the Elector and later King of Poland August the Strong and his son Friedrich August II. The area around Brühl's Terrace with its striking silhouette consisting of the Academy of Art, the Ständehaus and the Court Church was frequently depicted.

It can also be found on this brochure, which informs about hotels and restaurants in Dresden. The last page of the leaflet contains a city map with marked locations of the facilities. 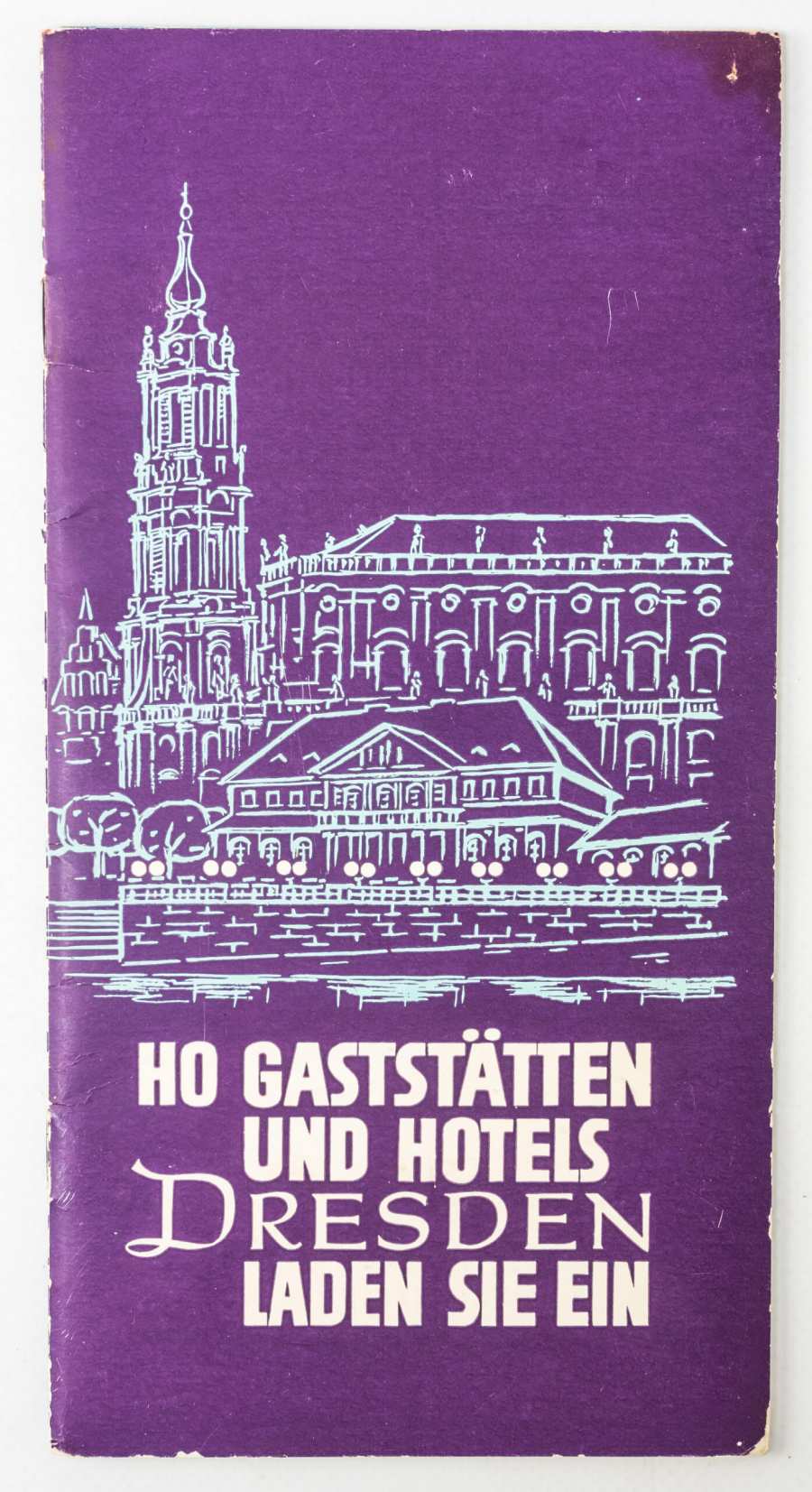 Dresden showed itself not only as the »Florence on the Elbe«, but also as a modern city, which was rebuilt after the destruction of the Second World War in the socialist republic. Thus, the baroque remains of the old town were lined with prefabricated housing complexes, such as the pedestrian zone of Prager Straße with hotels and shops. This postcard shows the somewhat different Elbe panorama near the Carola Bridge. Behind an excursion steamer of the White Fleet, the prefabricated concrete slab buildings on Rathenauplatz can be seen with colourful illuminated advertising boards. On the right in the background you can see the high-rise building at Pirnaischer Platz with its programmatic lettering »Socialism prevails« in red neon light. 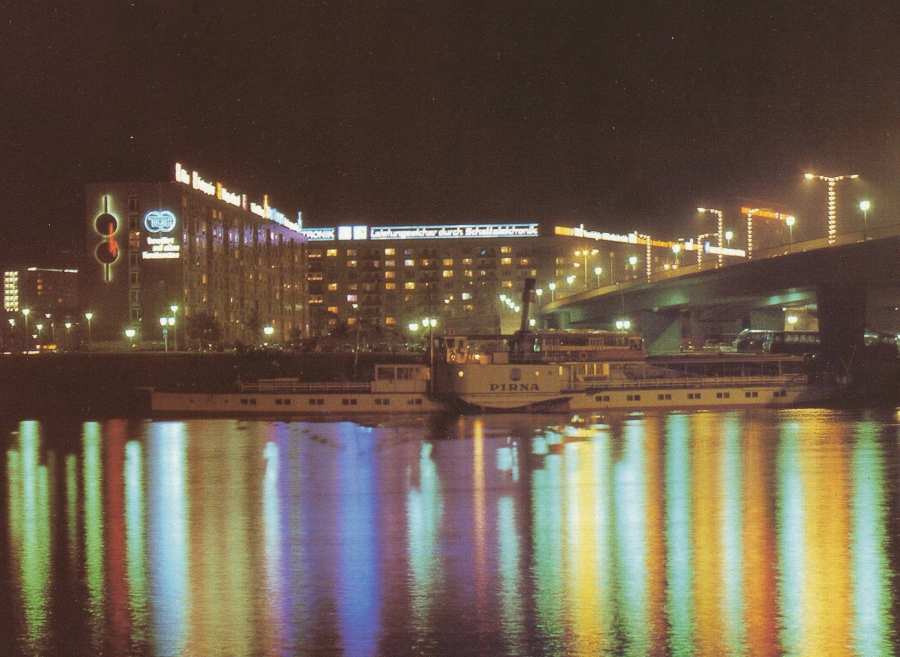 The larger football clubs in the DDR's district capitals often played in the GDR upper league. One of the most successful clubs was SG Dynamo Dresden, founded in 1953. This was not a conventional club, as it was part of the sports association Dynamo – the sports organisation of the GDR's internal security organs for members of the Ministry for State Security, the People's Police and the Customs Administration, chaired by Erich Mielke. This gave the football club a special, representative position: it specifically promoted competitive sport and brought together football talents.

This beer coaster shows the logo of Dynamo Dresden. 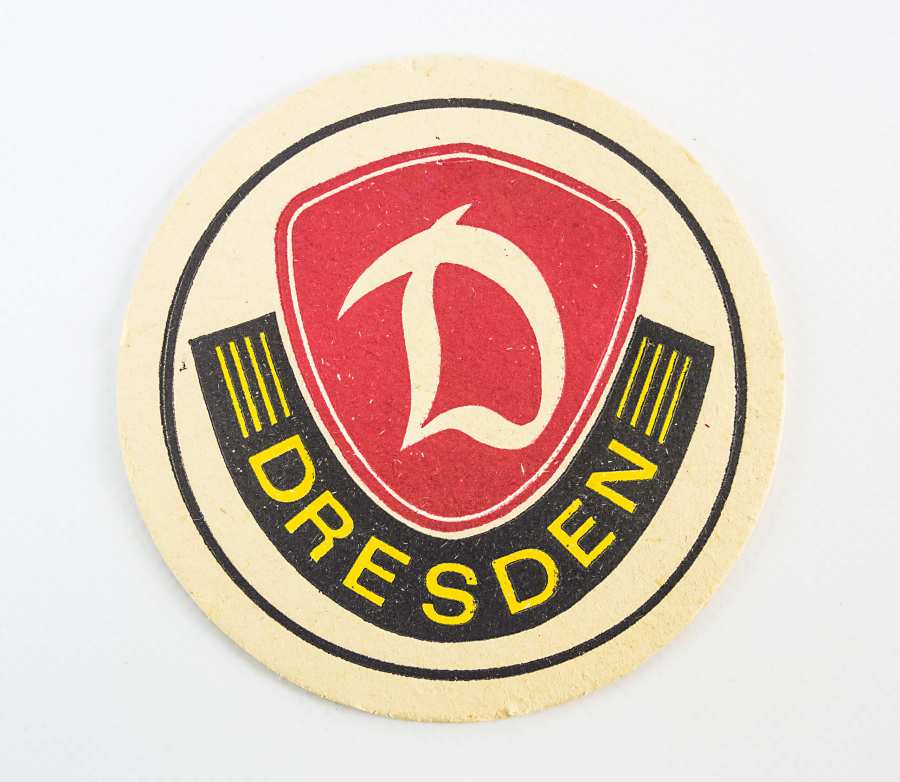 Mosaik was the most popular comic magazine in the GDR. Since 1955 the issues were published monthly by Verlag Neues Leben, and from 1960 by Verlag Junge Welt in Berlin.

The comic series told longer stories, set in different places and periods of world history, some of which ran to over 20 issues. They were always connected by the protagonists, who always experienced new adventures.

The »Digedags«, invented by the graphic artist Hannes Hegen, were the main characters until 1975, from 1976 on it was the »Abrafaxes« from the pen of Lothar Dräger and Lona Rietschel. With this change, the printing location moved from Leipzig to Dresden, where the magazines were printed from 1976 onwards by the Kombinat Grafischer Großbetrieb »Völkerfreundschaft«, based in the district of Pieschen.

Mosaik is still published today. It is the oldest German comic strip with the highest circulation and even holds the Guinness record title »Longest Continuation Comic in the World«. 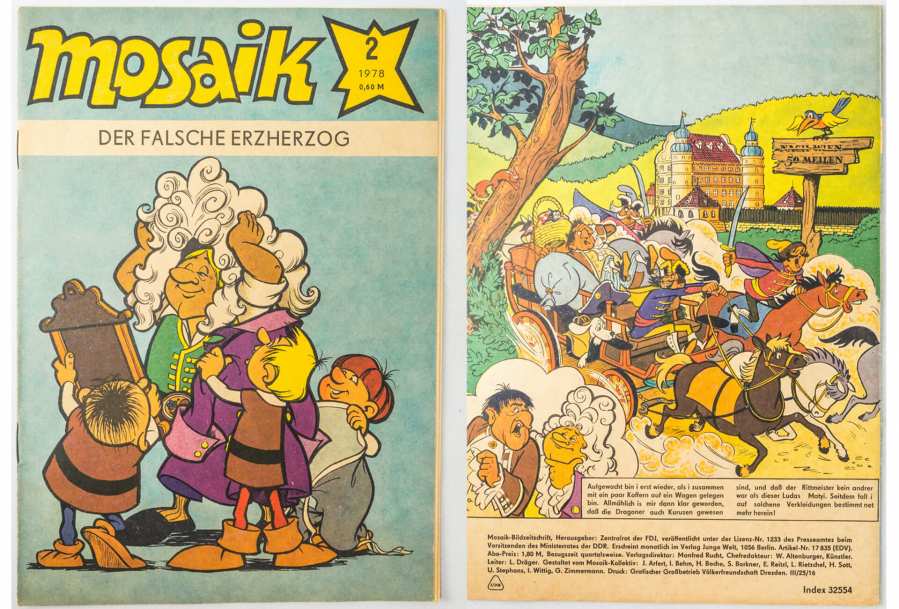 More GDR objects from and about Dresden 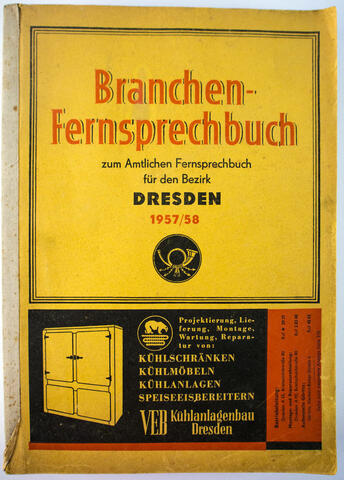 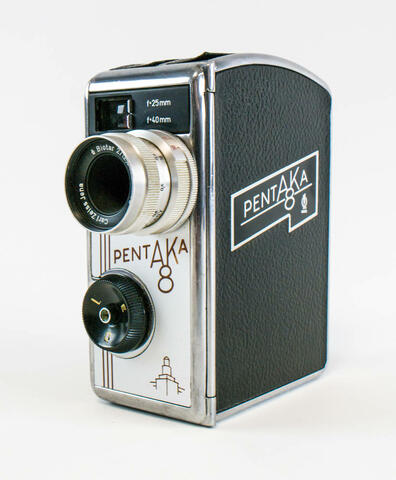 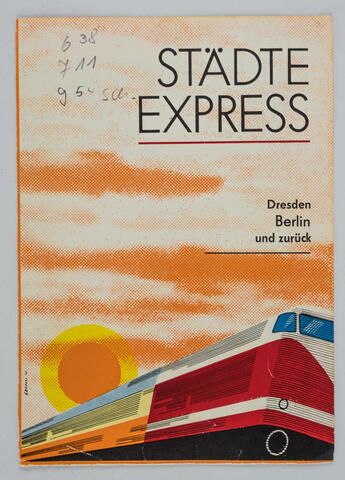