Since the founding of the DDR, the state has exerted influence on its artists and cultural workers. One important photographer who felt the effects of this state control on several occasions was Sibylle Bergemann, who nevertheless managed to find her own artistic path, especially in the DDR, and to go beyond all boundaries. Her photographs tell stories, stories of people from East Berlin, from their everyday lives, deep and melancholic, genuine and sometimes critical, but always unadulterated and beautiful – the story of a city. by Michael Geithner (6 Mar 2014)

Sibylle Bergemann is a photographer who knew Berlin like no other. She was born in Berlin in 1941 and worked as a secretary for the magazine »Das Magazin« for two years before she began her training as a photographer in 1966. She completed her training with the photographer and university lecturer Arno Fischer, who later became her husband.

First successes as a professional photographer

From 1969, photographs by Sibylle Bergemann appeared in weekly newspapers and from 1973 in the DDR's number one fashion and women's magazine »Sibylle«. She also worked for book publishers and presented her photos for the first time in Berlin in 1974 in a solo exhibition at the Haus der jungen Talente exhibition space. The sought-after German photographer joined the Association of Fine Artists of the DDR in 1977 and became a member of the Academy of Arts in 1994.

Bergemann documented everyday life in East Berlin with a certain eye for naturalness and patience for the photo at the right moment. She became known for her photo documentation of the construction of the Marx Engels Monument behind the former Palace of the Republic, which she accompanied photographically between 1975 and 1986. In her fashion photographs, too, she shows the unadulterated and uses the unadorned façade of East Berlin as a backdrop for her shots.​​​​​​​ 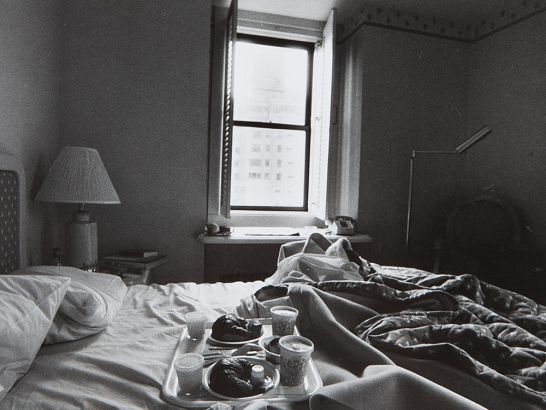 A career beyond national borders

Bergemann and Fischer's shared flat near Friedrichstraße station served as a place for international and DDR photographers to meet and exchange creative ideas. Her contacts with photographers working internationally also enabled her to travel beyond the DDR for the first time, to Italy and the USA, among other places.

The photo shown here was taken in a hotel room in New York in 1984. It testifies to Bergemann's talent for conveying many emotions with just a few pictorial elements and for creating an unstaged photograph that captures the naturalness and transience of the moment for eternity. Her travels took Bergemann almost all over the world and her photographs were published in countless reportage magazines.

After the fall of the Berlin Wall, she founded the »Ostkreuz« agency with six other photographers in 1990. With her sensitive travel pictures, portraits and photo series, Sibylle Bergemann succeeded in creating an unforgettable artistic oeuvre, with which she became a photographer of international renown both in the DDR and after the fall of the Wall. Sibylle Bergemann died of cancer in November 2010 at the age of 69.

All image and text rights are held by ISA Auctionata Auktionen AG.