The construction of the Wall and the Iron Curtain may have represented a limitation of the range of movement for many people, but the border installation, covering a total of 1400 kilometers, was a lucky chance for many animals and plants.
by Admin (4 Jan 2017)

The construction of the Wall and the Iron Curtain may have represented a limitation of the range of movement for many people, but the border installation, covering a total of 1400 kilometers, was a lucky chance for many animals and plants. The Green Belt has a width of 50 – 200 meters, runs from the Baltic Sea in the north to the Saxonian-Bavarian Vogtland near the city of Hof in the south and was reclaimed by the flora and fauna due to the many years of being untouched. The continuous border area which represented a wide green area between Kolonnenweg and the inner-German border holds a total of 146 biotopes today.

64% of the 177 m² area is covered by endangered biotopes, classified with the Red List of Germany. 29% of the area is classified as nature reserves. 87% of the area and about 80% of the length is already close to nature, the remaining 13% have been destroyed by fields, range land and the construction of roads and industrial areas. 450 roads are cuts in the unique natural heritage and are mostly insurmountable for various animal species. Because of these and other, if however few gaps, many populations of plants and animals are spatially and genetically isolated. This makes them vulnerable for diseases and can even lead to extinction. This problem is not to be ignored; for there are 1200 different animal and plant species among the settlers which have been categorized as extinct or lost by the Red List. The German conservation organization BUND therefore wants to close the bond of habitats as uninterrupted as possible and to preserve the natural riches. About half of the Green Belt is already in the responsibility of the states with the appropriation of nature protection, a third, however, is still in private hands and the Green Belt is under conservation entirely only in Saxony. In total, only 29% of the Green Belt is under conservation.

Already in December 1989, conservationists of both parts of Germany gathered in Hof in the context of an initiative of the BUND organization and developed the idea of the Green Belt and gave the project its name. Approved as a national nature protection today, the great significance of this border area was already clear back then. The Federal Government of Germany is considering this natural landscape a lighthouse project for biodiversity.

Furthermore, the idea of a Green Belt Europe has also been developed. In 2012, almost all bordering states have signed a “mutual declaration of intent” to preserve and develop the European Green Belt. Former Soviet head of state Mikhail Gorbachev is the patron of this project. Projects along the former Iron Curtain such as the Erlebnisstraße der deutschen Einheit ("Adventure road of German unity"), the Iron Curtain Trail as well as a hiking trail are also involved. The goal of BUND is also to establish the Green Belt Europe as a UNESCO natural and cultural heritage – a territory of 12.500 kilometers in length.

A number of historically interesting places are also located along the former inner-German border. In Thuringia you can visit the Grenzlandmuseum Eichsfeld. Here you can see an exhibition, a lookout tower as well as a preserved and partially reconstructed part of the border strip. In the Werra Valley there is the Grenzmuseum Schifflersgrund. At the border triangle of Bavaria/Hesse/Thuringia there is a 117 meter high watch tower as well as parts of the old separation barriers. At the Ellenbogen (Rhön), the corner pillar of the Long Rhön ridge, there is a Soviet listening device which was used by the Stasi until 1990. In the Rhön area there is also the Grenzmuseum Eußenhausen and the Dokumentationszentrum Kalter Krieg.

The German-German open-air museum is located in the Grabfeld plain as well as a number of different Memorial Places along the former border. The information road Der Grenzgänger furthermore offers the possibility to engage with German history, to discover remaining parts of the original fence and other parts of the border of the DDR as well as rare plants and birds.

In the region of Hof, the village of Mödlareuth is especially interesting. Part of it is located in Bavaria, the other part in Thuringia - the state border of the DDR used to go right across the village. A 700 meter long wall and multiply staggered border fortifications turned the village into a miniature edition of Berlin. Here you can also find original relics as well as a border museum.

For those who would now like to visit the Green Belt – please consider the following advice: About 800 kilometers of the death strip were filled with mines; they have been, however, officially cleared. There is still a remaining rest risk, but if you stay on the roads and pay attention to the warning labels you will be on the safe side. 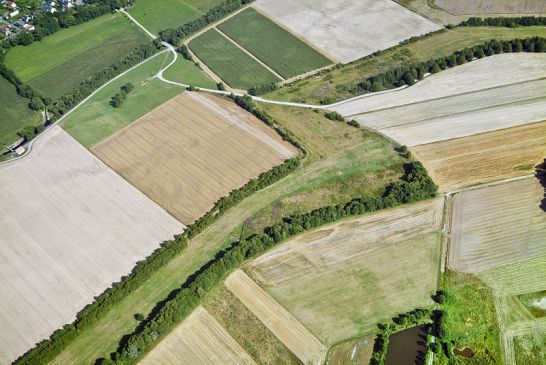 Relics of the GDR