On the corner of Prenzlauer Alle and Tor-/ Mollstraße stands a pompous building, which today is considered a popular place of shelter in the capital for international actors such as Brad Pitt or George Clooney. The Soho House Berlin is an exclusive club with combined living and work spaces for artists, journalists, directors and managers from the media sector.
by Admin (25 Nov 2015)

On the corner of Prenzlauer Alle and Tor-/ Mollstraße stands a pompous building, which today is considered a popular place of shelter in the capital for international actors such as Brad Pitt or George Clooney. The Soho House Berlin is an exclusive club with combined living and work spaces for artists, journalists, directors and managers from the media sector. (Vgl. Jenni Zylka: Eröffnung Club Soho House Berlin: München-Frisuren und Disco-Romper, in: Spiegel Online, 01.05.2010, http://www.spiegel.de/kultur/gesellschaft/eroeffnung-club-soho-house-berlin-muenchen-frisuren-und-disco-romper-a-692432.html, accessed on 09.11.2015.)

Every day I am passing this corner and keep asking myself, which stories this building might be able to tell. But not the stories of today, rather the ones from the past seem to be more interesting, when the building used to exists in another state; namely the GDR.

A small stele made out of glass tells about the history of this place in different languages, all other memorial plates have been removed. The house is now only accessible by paying members of the private club.

Interestingly enough, during the development of the building it was supposed to be open to all Berliners as a department store. Designed in the Bauhaus style, the building was opened as a credit department store by the Jewish business men Hermann Golluber and Hugo Haller in 1929. Customers could purchase products by paying by installments. It was possible to return goods within one week. The so-called “Kaufhaus Jonass” was managed by the two men until 1939, they were then forced to emigrate by the National Socialists in the context of the “Ayranization”.

The new German owners sold the house to the National Socialists who used the building for the “Reichsjugendführung”. About 9 million members of the “Hitler Youth” were taken care of from here.

After World War II the building was nationalized, after the forced union of the political parties KPD and SED in 1946 it was turned into the main quarter of the SED party leadership and from then on called “House of Unity” (German: “Haus der Einheit”). The first and only President of the GDR Wilhelm Pieck as well as Prime Minister Otto Grotewohl had their offices here. This was also where the Stalinist party model for the SED was worked on, where the party was “cleansed” from critics and where politically justified death penalties were pronounced against regime opponents. Another event defining the history of this building were the protests on June 17th in 1953, when protesters from the national uprising gathered mainly here as well as in front of the “Haus der Ministerien” (House of Ministries) (Vgl. Stefan Strauss: Ein Zimmer DDR, in: Berliner Zeitung, 16.05.2008, http://www.berliner-zeitung.de/archiv/wo-frueher-die-sed-regierte--zieht-der-klub-soho-house-mit-swimmingpool--lounge-und-sauna-ein-ein-zimmer-ddr,10810590,10558900.html, accessed on 09.11.2015.)

After 1959, however, the party leadership, the central committee of the SED, moved to the “Großes Haus” at Werderscher Markt. The “House of Unity” was from then on seat of the IML, the Institute for Marxism - Leninism. Part of that was also the Zentrales Parteiarchiv (Central Party Archive), which was taken over by the party management of the SPD in 1992, then from the Bundesarchiv (Federal Archives) in Lichterfelde for purposes of research and rehabilitation of the SED dictatorship. (Vgl. Mathias Raabe: Ein „städtebauliches Juwel“ wird verkauft, in: Berliner Zeitung, 20.04.2001, http://www.berliner-zeitung.de/archiv/juedisches-kaufhaus--naziverwaltung--partei-institut--das-eckgebaeude-an-der-torstrasse-hat-eine-wechselvolle-geschichte-ein--staedtebauliches-juwel--wird-verkauft,10810590,9895384.html; http://www.gedenktafeln-in-berlin.de/nc/gedenktafeln/gedenktafel-anzeige/tid/haus-der-einheit/, accessed on 09.11.2015.)

From 1995 on the building remained empty until it was bought for 9 million Euros and restructured along conversation practices by the German-British group of investors Cresco Capital (Vgl. Engländer kaufen frühere SED-Zentrale, in: Der Tagesspiegel, 19.04.2007, http://www.tagesspiegel.de/berlin/englaender-kaufen-fruehere-sed-zentrale/836298.html, abgerufen am 09.11.2015.)

Today, only a stele reminds of the turbulent history of this building complex. In opposition to earlier announcements, neither the office of Wilhelm Pieck nor the rooms for conferences, wellness and gastronomy are accessible for the public. 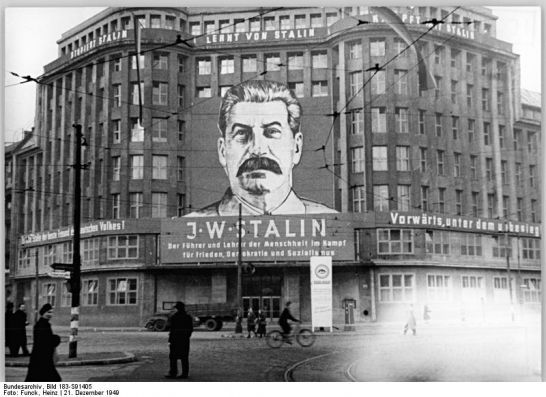 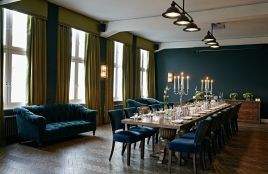 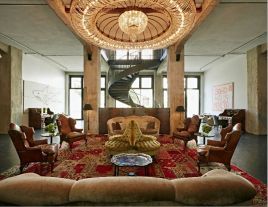