Transistorisation! Magic Word of the 60s in the GDR. Also fixed in the radio and television industry of Central Germany under the state scheme.
by Admin (29 Oct 2014)

Transistorisation! Magic Word of the 60s in the GDR. Also fixed in the radio and television industry of Central Germany under the state scheme.

The VEB Fernsehgerätewerk Staßfurt (nationally owned enterprise TV factory Staßfurt) receives the instruction to bring the first full transistorized suitcase television on the market. For the 20th anniversary of the GDR foundation in October 1969 it should roll off the line in high-volume. But, a technical problem after another lets the goal of the state scheme become a nightmare for the Staßfurt people.  The 1967 started production of the K67 “moves” itself between 6 and maximal 26 working samples daily. Every few weeks there have to be done changes from the inside to outside.

Walter Mainz, as graduate and qualified formatter coming freshly from the Hochschule für bildende und angewandte Kunst in Berlin-Weißensee (college of visual and applied arts) to Staßfurt, conceives the sheet steel design, at that time revolutionary for a luxury device, and the accumulator for the black and white watching in the green countryside.

That the original nickel-plated iron carrying and at once stand-up handle of the K67 finally is changed into high-grade steel, too, doesn’t help the first mini television of the GDR. With its posh new handle it is taken out of the production still in 1967 and is carried to its grave. As part of current outlook planning of the Rat für gegenseitige Wirtschaftshilfe (Council for Mutual Economic Assistance (COMECON)) of the socialist states it was decided in Moscow to produce portable television sets until further notice in the USSR. From now on the soviet Junost colonizes the windows of the RFT-shops, stores and department stores. Not until the middle of the 1970s the respective GDR innovations like the Combi vision 310, now in plastic dress, join. 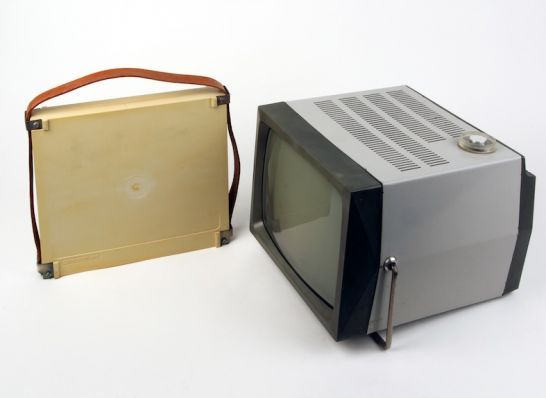 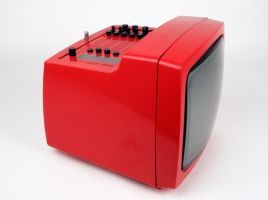