In 1949, the brand and company „Minol“, a combination of the first parts of the words Minerale and Oleum (Latin for oil), was founded for the Soviet occupation zone. The founding companies were the Deutsche Kraftstoff- und Mineralölzentrale (German Center for fuel and mineral oil) and the German-Russian Naphta AG (DERUNAPHT). The new brand quickly became popular, the founding of the corresponding combine „VEB Kombinat Minol“ on January, 1st in 1956 was the logical consequence. From then on, Minol was in charge of supplying the entire DDR with fuel and lubricants. The headquarter of the combine was located on Alexanderplatz in Berlin. Until 1968, the „Minol House“ used to stand there, before it was torn down in the context of the redesign of the square. The mineral oil products of Minol were produced in the Leuna factories.

A mascot with a big beak

In order to increase the degree of familiarity as well as the popularity of the domestic fuel and lubricants, a mascot needed to be found to promote the products made in Leuna. In 1960, the doll designer Heiner Knappe developed the „Minol Pirol“ (Pirol is the German word for oriole) in the studios of the Deutsche Fernsehfunk (German television network). In the beginning, the mascot was a mixture of an oriole and an oil can – later, however, it was altered to resemble the bird a little bit more. This particular type of bird was selected because of its long beak and the consonance of the words „Minol“ and „Pirol“. The cute figure even made it into television and became a popular element of many TV advertisements by acting as an adviser. These short films were shown in the highly popular show „Tausend Tele Tips (TTT)“ (German for „thousand television pieces of advice“) in the years 1960 until 1976.

Modernization of the Minol Pirol

There are, of course, a number of different designs of the popular mascot. The collection of the DDR Museum also holds a few copies, both of the old as well as the new design of the famous bird. The figure made from stoneware overcast with felt clearly shows the combination of a bird and an oil can, the original design of the figure. It is wearing a gas station attendant's hat. The other object shown below is representing quite a contrast to the older design. The figure made from plastic is clearly distinguishable from the original version. The difference of the facial features is quite noticable. The revised version of the Minol Pirol is characterized by a larger beak. The headpiece is also adjusted according to the spirit of the age – the bird is now wearing a modern baseball cap.

Liquidation of the state-owned companies

In the 1980s, Minol had established a net of 1300 gas stations all over the DDR. Along with the political changes and the German Reunification, however, the company came to a quick ending. In the context of the privatization of the DDR economy, the brand Minol along with its factories in Leuna was sold to the French mineral oil group Elf Aquitaine and the German Thyssen Handels Union AG in January 1993. The French company was holding 98% of the shares. However, the large-scale deal was overshadowed by the Leuna affair. 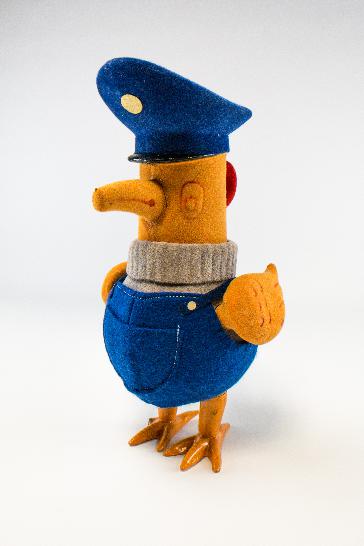 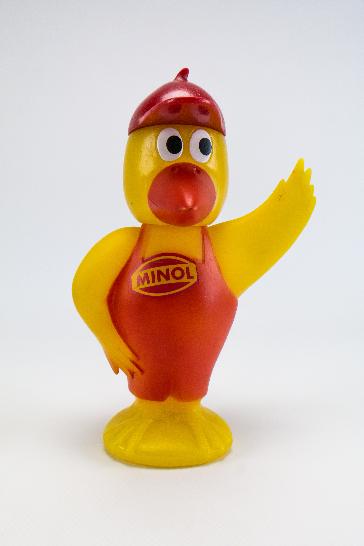