During the first year after the war, the governance had to undertake special strategies in order to increase the industrial production and economy. The dammages caused by the war casted industrial zones into poverty. Many workers, especially men, were still in war captivity. In the East, a large number of infrastructure´s investements of Soviet occuping force were unthinkable. Therefore it was important to make the most out of the available resources.
by Jörn Kleinhardt (12 Feb 2015)

During the first year after the war, the governance had to undertake special strategies in order to increase the industrial production and economy. The dammages caused by the war casted industrial zones into poverty. Many workers, especially men, were still in war captivity. In the East, a large number of infrastructure´s investements of Soviet occuping force were unthinkable. Therefore it was important to make the most out of the available resources. As a model to increase productivity, without making large investements, served the Soviet Stackhanovite movement from the 1930s.

On 13th October 1948 the miner Adolf Hennecke (43 years old at that time) extracted 24,4 cubic meter of coal from a coal stratum of the VEB mine Karl Liebknecht, during a very well prepared shift, largely surpassing the daily standard of 6,3 cubic meters. The high-performance coating of the miner was established by the State as the start of the Hennecke movement. However the collegues considered him the “rulebreaker”, because they worried the general increases of job norms due to his “standard overachieving”. Adolf Hennecke was rewarded, for example, with a bonus of 50 Mark, 3 boxes cigarettes and one bottle of brandy. The State honored him with several distinctions as the Patriotic Order of Merit, the National Prize of East Germany First Class and the Order of Karl Marx. He stopped working as a simple miner, became in 1950 a member of the parlament and worked in the State Planning Commision of the GDR. He was also a Member of the Central Committee of the SED till he died in 1975.

The 13. October was conventionalized as the “Anniversary of the groundbreaking action of Adolf Hennecke” and nowadays it is celebrated as the Day of activists. In October 1949, on the first anniversary, 25,000 activists and innovators were awarded with medals and bonuses by the FDGB.

The picture from our collection was produced during the beginning of activists’ movement period. It represents the self-understanding and the publicized art style of the “Socialist Realims” according to the Soviet ideal. It shows a middle aged man holding a flag and wearing a medal of the “Activist of the Five-Year Plan”. At the top of the flag, it is written „Siegerbetrieb“ (Best practice factory) and at its bottom “im Wettbewerb “ (on competition). The slogan “Ruhm und Ehre unseren Aktivisten” (“Glory and honor to our activists”) corresponds to the characteristic style of the early post war period. Under it, between two spikes, there are the data of 13 October 1951, the third year of activist mouvement, and the symbol of FDGB. The picture is made of wood and is protected by a glass panel. On the back there is a solid metal hook to hang it.

We want to show you an image of a medal of "Activist of the Five-Year Plan" of 1955 that slightly differs from the medal of the picture above presented. On the medal you see the number 5 and in the background a hammer and a compass, framed by two spikes. At the bottom it is written in uppercase Activist and on the back "live like a socialist requires to work like a socialist". The upper side of the pin shows the year of the reward, in our sample 1955.

Have you ever been awarded as an activist, or innovator? What have you done to receive a prize? We would be thankful if you tell us your experiences and stories about Activist Mouvement. 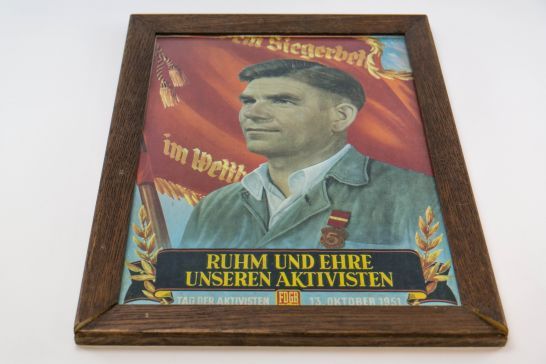 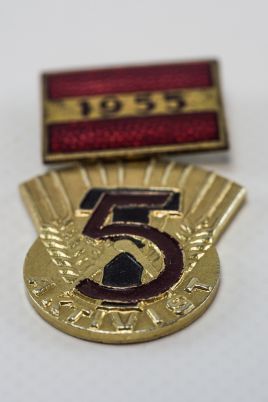