„Die Normalität des Absurden” tells the story of Heinz Schneider, who lived through two German dictatorships. Even though the book mainly focuses on his personal life, many universal themes are uncovered: how is one meant to behave in a dictatorship? How is our identity formed? How should the DDR be remembered? by Melanie Alperstaedt (27 Apr 2017)

Heinz Schneider was born in 1934 in the region of Sudetenland in today’s Czech Republic and lived through the two German dictatorships of the 20th century. He published his autobiography at the age of 77 thereby reflecting on the extent to which it was possible to lead a “normal life” under such absurd political circumstances. He looks back at his childhood, studies and medical career and analyses them with the precision of a scientist. On the one hand, his description of his life in the DDR is very factual. The integration of official documents such as his Stasi records further accentuates this style of writing. On the other hand, his disappointment and frustration for the bygone system are palpable, especially so in the personal letters he chose to incorporate.

Heinz Schneider grew up during the national socialist dictatorship, but didn’t belong to the groups who suffered from the regime directly. He remembers not being aware of the system’s faults and consequently lead a “normal” life even in these absurd times. Indeed, he was only a small child at the time and thus too young to have developed a political conscience. But in addition to that, he was influenced by the fascist education he received at school and the political orientation of Sudetenland, which was majoritarily in favour of Hitler. Even though these first chapters are based on fragmented childhood memories, they help to show to what extent children are ideologically malleable.

The question of identity

Luckily, he was too young for these values to influence him on the long term and was soon after integrated in the DDR’s socialist system. The following chapters are particularly interesting, as they raise the question of identity. When, if it was ever the case, did he start feeling like a DDR citizen? How did certain events and experiences influence his political views?

Schneider says that he “never felt like a DDR citizen”. Considering his father’s communist stance, this statement can seem surprising. He grew up in a socialist country and was raised in a communist family and despite these influences, he became more and more apolitical with every day that went by. How can that be?

A potential answer to this question can be found by looking more closely at his personal traits. Indeed, he always wanted to follow his own moral guidelines, regardless of the prevailing political ideology. Because his core values didn’t always correspond to those of the SED dictatorship, he started to be seen as a threat. As a result, he was expelled from his university and could no longer finish his degree until further notice, even though he was essentially politically inactive. Feeling like a “victim of the system”, his distrust for the regime increased, as did his will to detach himself from DDR values.

Discretion and prudence in a dictatorship

Courage is generally not highly valued by authoritarian regimes, especially if used against the interest of the latter. Heinz Schneider therefore argues that political discretion comes to one’s advantage when living under a dictatorship. The less one is noticed, the easier life will be. Schneider was well aware of the dictatorial nature of the DDR but chose to withdraw from the public sphere. Even though one can feel at times that he would have liked to oppose the system, he decided to prioritise his career as a head doctor and thus to have a “normal” life.

The history of Germany is not the central element of his autobiography. However, he describes his research and daily duties in the diabetes department in great detail. This particular focus allows him to show that the rest of his career unfolded smoothly after he was allowed to resume his studies. This conscious emphasis on the personal rather than on the historical highlights “the normality of the absurd”. In other words, it seeks to demonstrate that extraordinary political circumstances do not exclude the possibility of leading an ordinary life.

Heinz Schneider depicts the Stasi system in very succinct and factual words. His story and anecdotes give an interesting insight into the relationship between citizens of the DDR. The communitarian mindset “all for one and one for all” is presented by the author in a positive light. An example of this common solidarity are the studies he benefitted from free-of-charge. Indeed, he is offered the opportunity to carry out medical studies for free, even though he came from a working-class family; something that, according to him, was less likely to happen in the West. Even though the communist dictatorship’s negative aspects are at the heart of his autobiography, Schneider does not demonise the DDR.

The author draws two main conclusions from his experiences as a DDR citizen. First and foremost, one has the duty to leave an accurate and true image of the DDR behind, so that one will be able to learn from the past, according to him. A more positive image of the regime would inevitably lead to “Ostalgie”, that is, a nostalgia of the East. On the other hand, the DDR would become demonised, should a more negative representation be given. Secondly, he argues that democracy is and will always be the only viable political alternative, even though every political system has its own flaws. One should therefore always protect and defend democracy.

As a non-German who studies in England and is currently doing an internship in Berlin, I have learnt a lot about life in the DDR thanks to Heinz Schneider’s work. I highly recommend it to everyone.

In my upcoming interview with the author, I will uncover his views on scientific research and healthcare in the DDR, along with many other topics. So if you enjoyed this article and would like to know more about Heinz Schneider, watch out for next week's blog entry! 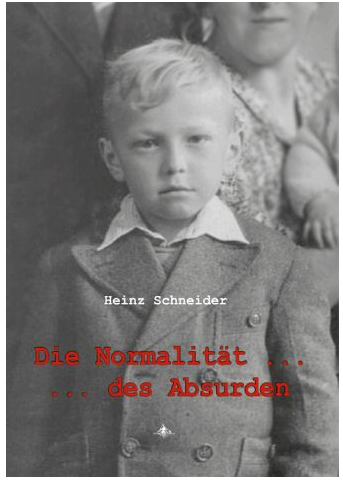 "The Peaceful Revolution" by Jens Schöne