After the Second World War, more than 30% of the housing stock, 85% of classrooms and 80% of hospital rooms in Berlin were destroyed. What was to rise up from the ruins of the capital? The Socialist Unity Party (SED) saw a chance to include the rebirth of the city into the newly founded German Democratic Republic. by Praktikant (10 May 2017)

After the Second World War, more than 30% of the housing stock, 85% of classrooms and 80% of hospital rooms in Berlin were destroyed. What was to rise up from the ruins of the capital? The Socialist Unity Party (SED) saw a chance to include the rebirth of the city into the newly founded German Democratic Republic. Berlin was meant to be a model city of the DDR and was therefore the place for the first attempts of a Socialist construction policy. The building codes were influenced not only by economic factors but also included political and social challenges.

Put differently: The architecture of Berlin and all other cities in East Germany was supposed to symbolize virtues such as equality, collectivity and openness in order to support the way into a Socialist society.

Economic guidelines in urban planning
“We don’t have time for shenanigans. We have only one task: To build apartments for the workers, as many, as fast, as cheap as possible. Always keep that in mind.” says the city architect in Brigitte Reimann´s novel "Franziska Linkerhand" and formulates thereby the heart of the matter of socialist building policy. (Dörhöfer, 1994, p.121).
The Socialist construction policy of the postwar period had the primary goal to provide apartments for all citizens of the DDR. Therefore, a rational construction industry model was created which was supposed to fulfil all of these expectations. Methods such as the industrialization of the building industry and the automating of the construction process were introduced in order to lower costs. Another example is the mass construction programs such as the Siebenjahrplan (Seven-Year-Plan) which envisaged the construction of 772.000 apartments between 1959 and 1965 (Zinsmeister, 2002). These Plattenbau-style buildings were not only to be cost-saving, but were also meant to promote the principle of equality, an essential feature of Socialism.
In addition to cost-efficiency, the idea of functional buildings also played another role. Cities were supposed to be built “by the industry, for the industry” (publication series of the Akademie der Künste, 1995, p.210-211). This principle meant that there were often no decorative parts in the architecture, except if they were fulfilling a precise purpose. This is why there was only little room for architects to express their creativity.
This architectural monotony and one-dimensionality was strongly criticized by inhabitants and architects at the time, even though the Plattenbau stood for comfort and coziness at first.

Berlin as a role model for a Socialist city
The “Sixteen principles of city planning” (publication series of the Akademie der Künste, 1995, p.210-211), which were published on July 28th 1950 described the goals as well as the form the ideal Socialist city was to take. This is where the connection between architecture and power politics once again becomes quite evident: The city was to be the expression of the political life – nothing was left to chance.
An example is the Stalinallee, called Karl-Marx-Allee today, a street with a length of 3 kilometers east of Alexanderplatz. Due to its central location and severe destruction after the war it was selected to be the “first Socialist street on German soil” (http: (http://www.luise-berlin.de/bms/bmstxt01/0103prof.htm//www.luise-berlin.de/bms/bmstxt01/0103prof.htm). Its enormous width and ideal location were perfect conditions for demonstrations, deployments and festivities: It promoted communal living for DDR citizens. Furthermore, this is where the “Wohnzelle Friedrichshain”, the first housing complex of East Berlin, was built.
Not only did the Stalinallee with its magnificent buildings fulfil the Socialist dreams of the time, it also served another function: It symbolised the counter-image to the imperialistic world. Architecture was used as a means of propaganda on both sides of the Iron Curtain, even though the architectural guidelines in West Berlin were not quite as strict. On the one hand, West Berlin tried to position itself as the shop window of freedom and consumption. On the other hand, East Berlin portrayed itself as a role model for equality and collectivity. Symbols of imperialism therefore needed to disappear from the capital of the DDR. That is why the city palace was torn down, since the party was convinced that it stood for the feudalistic Germany.

Open living environment
The appearance and the structure of the cityscape where supposed to fit and support a Socialist lifestyle. The interior design of apartments was of even greater importance. The SED recognised the importance of the private living space as a means of spreading Socialist values. The fact that Socialism tried to influence the private space shows the amount of effort the SED administration took on in order to educate its citizens in the long run as well as subconsciously.
The interior design was supposed to create healthy and calm living conditions. Open architecture was preferred over courtyard-style buildings because it was meant to support the convergence of the different social classes. The motto “functionality, beauty and coziness” (Dörhöfer, 1994, p.109) was (inevitably) realized in almost every household and reflected the reigning purpose-built mentality of the party.
The interior design of public buildings was also central in communicating the ruling ideology. Murals such as Womacka’s “Am Haus des Lehrers”, “Triumph des Todes” or “Unser die Welt – trotz alledem” by Ronald Paris were amongst the most-seen pieces of art in the DDR: The latter was exhibited in the Palace of the Republic.
The SED was quick to realise that art could be used as a means of communicating reality as well as an effective means of propaganda.
Subsequently, it can be argued that every administration tries to promote its political values and thus leaves a mark in the cityscape. The less democratic a government is, the more it is likely to use architecture as a means of propaganda. Even though some traces of the previous administration have been eliminated because of political reasons, they can still be found. The result is a beautiful yet chaotic architectural mixture which makes the contemporary Berlin as eclectic as it is. 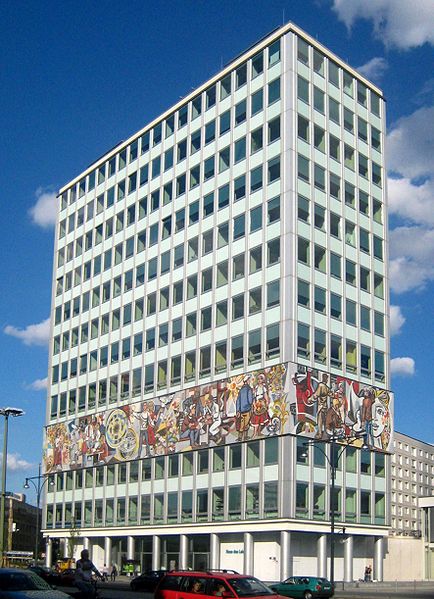 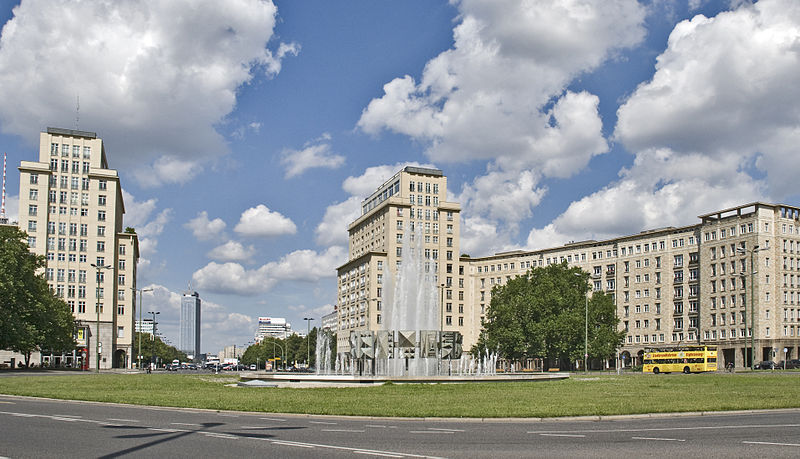 “Constructing Socialism in East Germany - an essay by Stephanie Engelhard