At 368 metres, it is still the tallest building in Germany: the Berlin TV Tower. In this blog post, we present the history of this world-famous building, which was opened in the capital of the GDR on 3 October 1969, as well as objects from our collection on the subject. by Vanessa Jasmin Lemke (1 Oct 2021)

In the presence of the SED's political heads, the then Chairman of the Council of State of the German Democratic Republic, Walter Ulbricht, opened the television tower at Berlin's Alexanderplatz on 3 October 1969, which became one of the most important and popular buildings in the history of the country. At the same time, the introduction of the GDR's second television channel, DFF2, heralded the era of colour television in the young socialist republic.

After years of internal discussions about the right location as well as the appearance, work on the TV Tower began on 4 August 1965 under the direction of Gerhard Kosel, then President of the German Building Academy, who was commissioned by the SED leadership.

The tower shaft, which tapers towards the top, was erected using a climbing construction method. The work progressed rapidly, so that the 100-metre height mark was already passed on 4 October 1966 and the final shaft height of 249 metres was finally reached on 16 June 1967. A total of 8000 cubic metres of concrete were needed for the shaft. The striking sphere of the tower, for whose exterior stainless steel was imported from West Germany, was assembled piece by piece from a total of 240 segments. The last one was installed on 7 October 1968, the 19th birthday of the Republic. Between 2 and 30 October, the top of the tower, including the antenna, was assembled, followed by the interior, which took almost a year to complete.

After four years of construction, the new television tower of the capital of the DDR was opened on 3 October 1969, and on the 20th birthday of the Republic, 7 October, it was also opened to visitors. The central organ of the SED, »Neues Deutschland«, wrote on the day of the ceremonial opening: »The tower – a masterpiece« as well as »... The television tower is the new landmark of our rising city, announcing the power of the workers' and farmers' state. A marvel of technology designed under the auspices of the German Post Office and built by scientists, technicians and workers of our country. More than 300 companies came together for fruitful socialist joint work. ...«

In total, the construction of the television tower cost over 132 million marks, four times more than originally planned. In the following years, however, it developed into a popular tourist attraction with its viewing platform and the Telecafé, which was visited by four million people in the first three years. 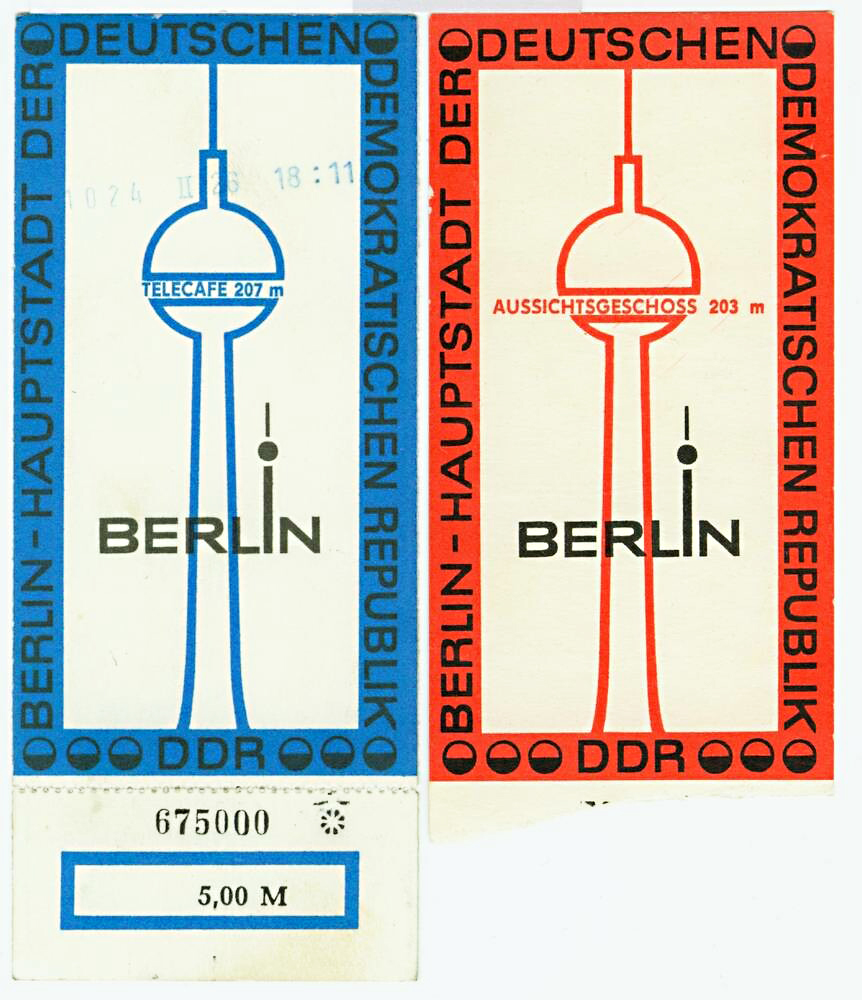 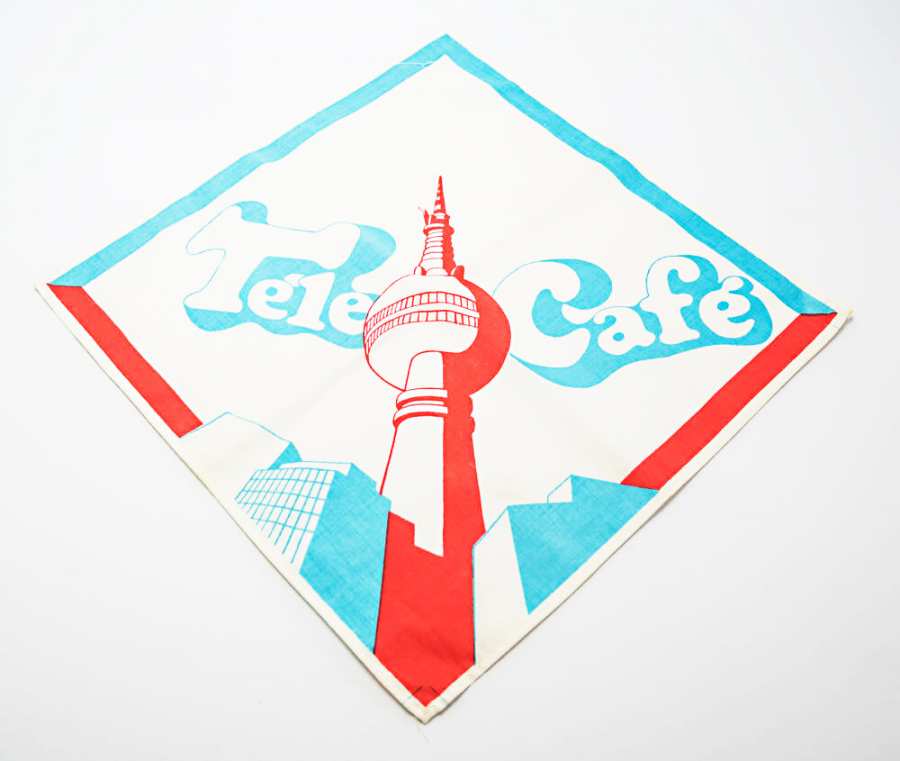 TV Tower souvenirs in the collection

In many ways, the TV Tower has been marketed since its completion. We have picked out two particularly nice historical souvenirs from our collection: The first is a brass pen tray for desks, showing the tower along with its associated pavilion. The second is a classic souvenir in the form of a large biros. At the back of the pen is a transparent window with a tower made of plastic and painted silver. Behind there is the inscription »UKW- und Fernsehturm Berlin / Hauptstadt der DDR / Eröffnet Oktober 1969 / Telecafe in 207 m Höhe« (VHF and television tower Berlin / Capital of the DDR / Opened October 1969 / Telecafé at a height of 207 m). 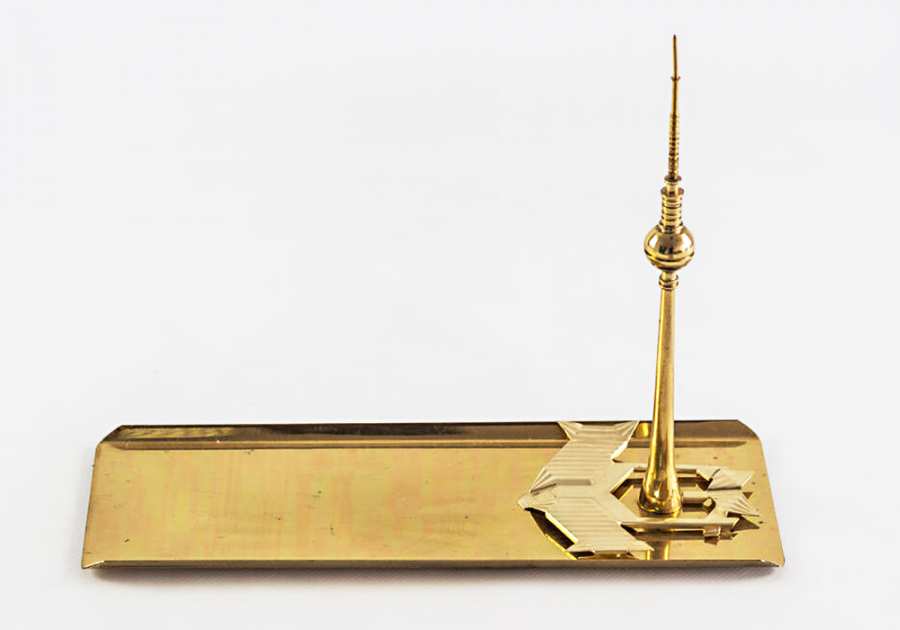 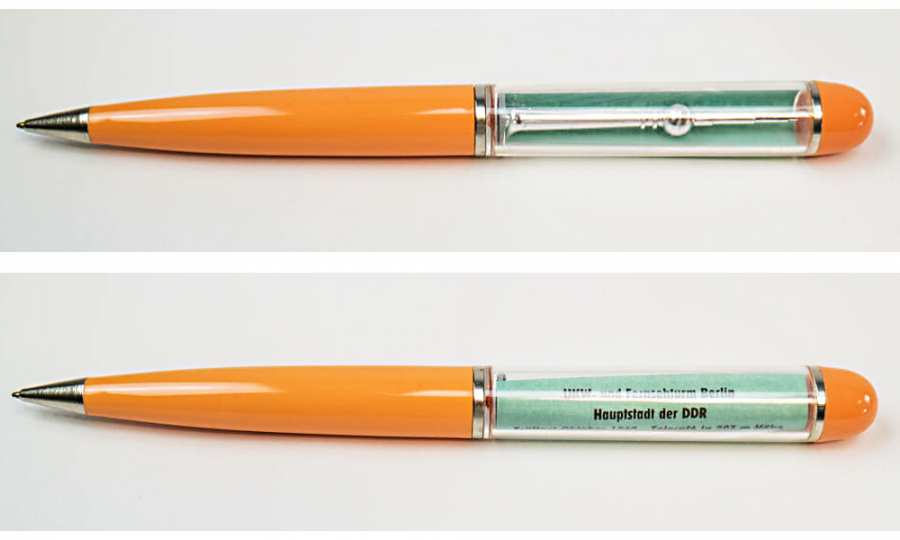 Berlin TV Tower is the tallest building in Germany

The Berlin TV Tower is now regarded as a national symbol of reunified Germany and, at a height of 368 metres, is still the tallest building in Germany and the fourth tallest TV tower in Europe.

The number of visitors is still huge. Every year, the tower is visited by over one million people from all over the world, making it one of the 10 most popular sights in Germany.

Further objects relating to the Berlin TV Tower in the collection 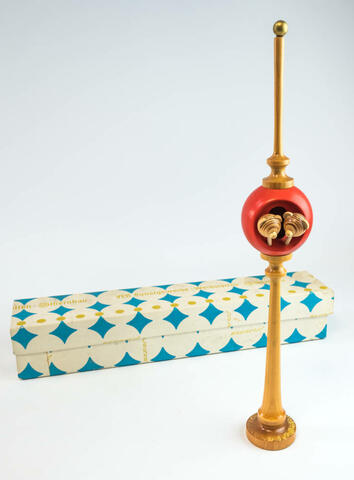 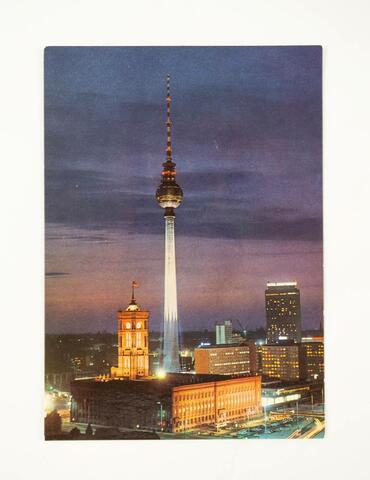