From Minol-Pirol and Fewa-Johanna to Korbine-Früchtchen: Despite their comparatively short »period of use«, almost everyone who lived in the GDR knows them. With the help of numerous posters, figures and displays from the DDR Museum’s collection, we give an overview of the history of advertising in the GDR. (11 Sep 2014)

Unlike in capitalist countries back then and today, advertising in the GDR was not aimed at establishing competition between different consumer goods and companies, but rather mainly presented new developments and products. After the popular uprising on 17 June 1953, the variety of consumer goods in the GDR was significantly increased in order to improve supply and, in this way, the satisfaction of the population.

The beginnings of GDR advertising date back to the 1950s. Many designs are reminiscent of those from the pre-war years, such as the product advertising for brandy by VEB Weinbrand Wilthen in Upper Lusatia (Saxony), whose packaging is based on the advertising models of the pre-war period. 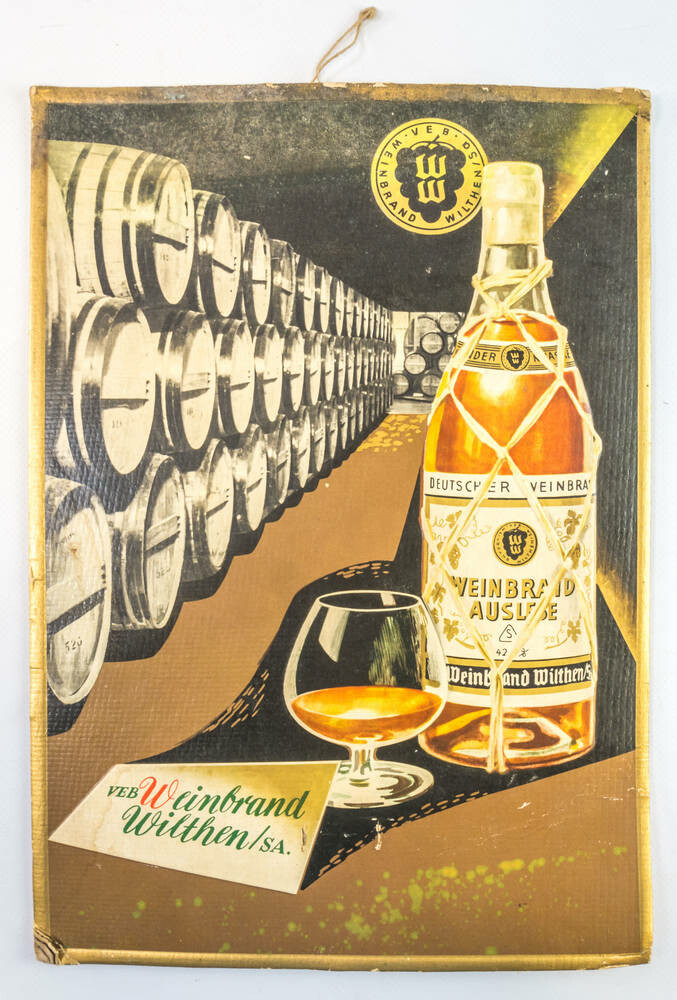 A look towards the West

At the same time, however, new advertising formats were being tried out and implemented, occasionally risking a glance at the neighbour to the West. The »Fußflott« sign of the »Carl Hoernecke« factory for chemical-pharmaceutical preparations in Magdeburg advertises one of the company's own creations from the early 1950s. In contrast to most advertising signs from this period, the cardboard display uses a layout that was contemporary at the time and does not follow the classic style of pre-war advertising. Striking slogans such as »Wer stets viel geh'n und stehen muss, ist stets durch 'Fußflott' flott zu Fuß« (whoever has to walk and stand a lot is always fleet of foot thanks to »fußflott«) are also typical for West German advertising creations. 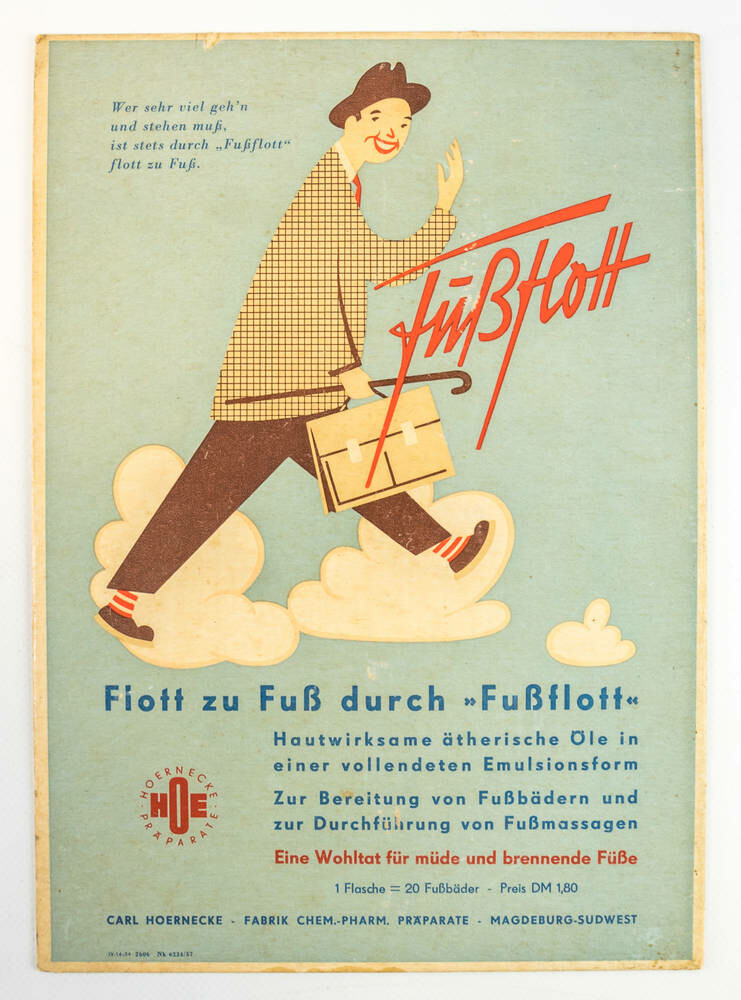 Despite the Second World War and the division of Germany, some companies were able to continue their history of advertising. As early as 1932, the fine wax product »Fewa« was introduced, which was later produced in both the GDR and the Federal Republic. The advertising figure was the chubby-cheeked »Fewa-Johanna«, the only advertising figure in the GDR whose origins lie in the pre-war period. The commercial artist Horst Geil adapted the hard-working washerwoman to the aesthetics of the time. As a doll, she could be found in drugstores, for example, and also gave tips on proper laundry care on GDR television.

Another company with an advertising tradition was the VEB Schuhfabrik Zwönitz, which not only advertised its children's shoes with the slogan »Den Kindern das Beste!« (the best for your children!), but also referred to local craftsmanship and tradition with the »Zwönitzer Schusterjunge« (Zwönitz cobbler boy). 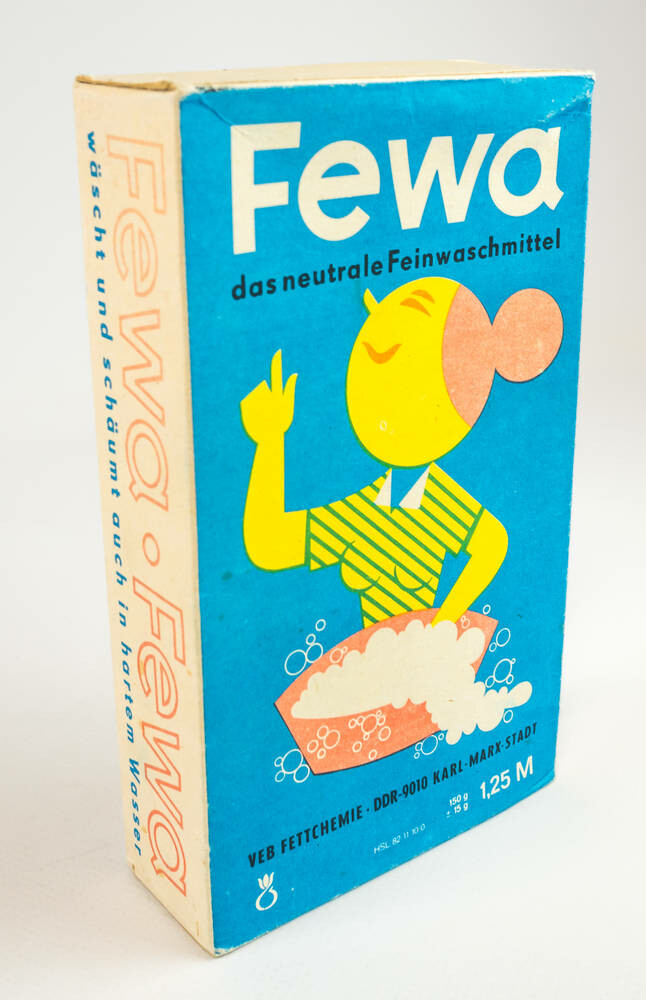 As the »Fewa-Johanna« already proves, advertising figures not only ensure recognition value, but are also truly popular figures who are trusted by young and old alike. Therefore, in the course of the history of GDR advertising, more and more such figures were developed, some of whom also conveyed certain values in addition to their advertising effect.

The zoo in Berlin-Friedrichsfelde, the counterpart to the West Berlin zoo, for example, relied on »Ede, the zoo apprentice«, originally a comic figure by the cartoonist Erich Schmitt. The animal-loving mascot wears a grey suit with yellow buttons, a matching hat with the inscription »Tierpark Berlin«, a broom, a bucket of water and large black shoes. The figure in our collection is made of wood. 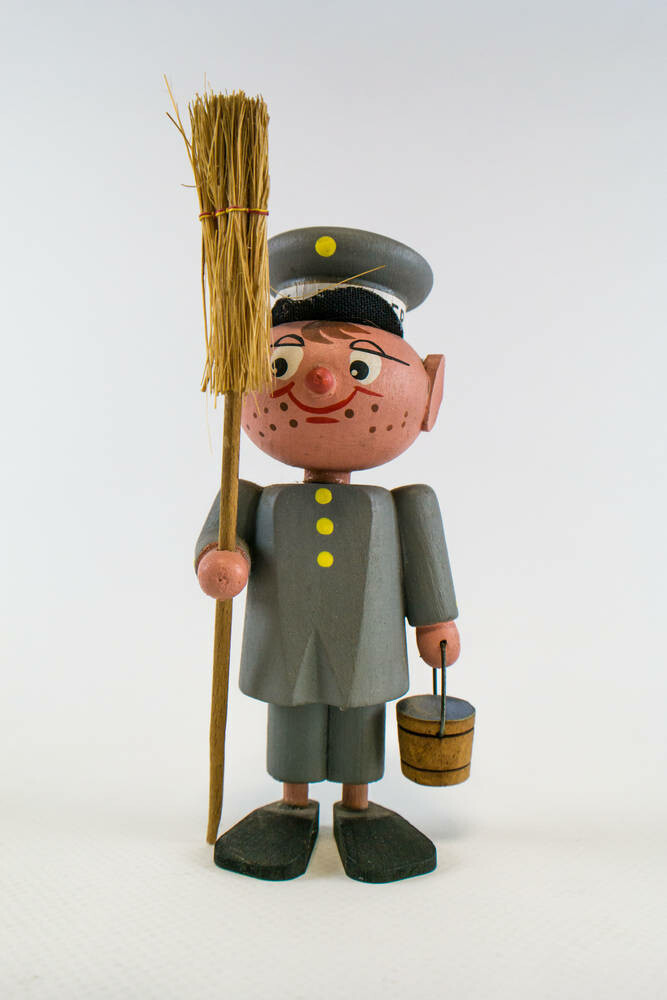 »Korbine Früchtchen« was also well-known and popular. In addition to her advertising mission, she pursued the goal of teaching children about healthy nutrition and fruit gathering. The »Minol-Pirol«, the distinctive advertising bird of the VEB Kombinat Minol with its trade mark of the same name (founded on 1 January 1956), should also be mentioned. The mascot with a blue smock and hat designed by Heiner Knappe took shape in 1962, developed from an oil can with wings and legs.

Not to be forgotten is the »Leipziger Messemännchen«, the mascot of the Leipzig Trade Fair, which was designed for the 800th anniversary of the fair in 1964 by GDR art prize winner Gerhard Behrendt, who also created the Sandmann. The little businessman in a blue suit with a yellow globe for a head, a pipe in the corner of his mouth and an elegant little hat with the letters MM (Muster-Messe) represents the internationality of the trade fair city. The colours yellow and blue stand for the city of Leipzig.

Many brands and advertisements took citizens of the small republic to faraway places. This »Jasmatzi« display advertises the cigarettes of the same name under what was then the common advertising slogan »Orient«. The surface of the sign is made of dark red velvet and the design is reminiscent of a temple-like entrance. The special feature here is that the advertising stand has an additional stand at the front into which a cigarette could be inserted.

A somewhat unusual advertisement is that of the fine soap »cha« from VEB Oderna Seifenwerk in Frankfurt (Oder). The Mediterranean-like name and the corresponding illustrations suggest a certain exoticism and internationality. This advertising display is a typical example from the 1960s and early 1970s, as in this period advertising creations increasingly replaced the classical elements of the pre-war period. 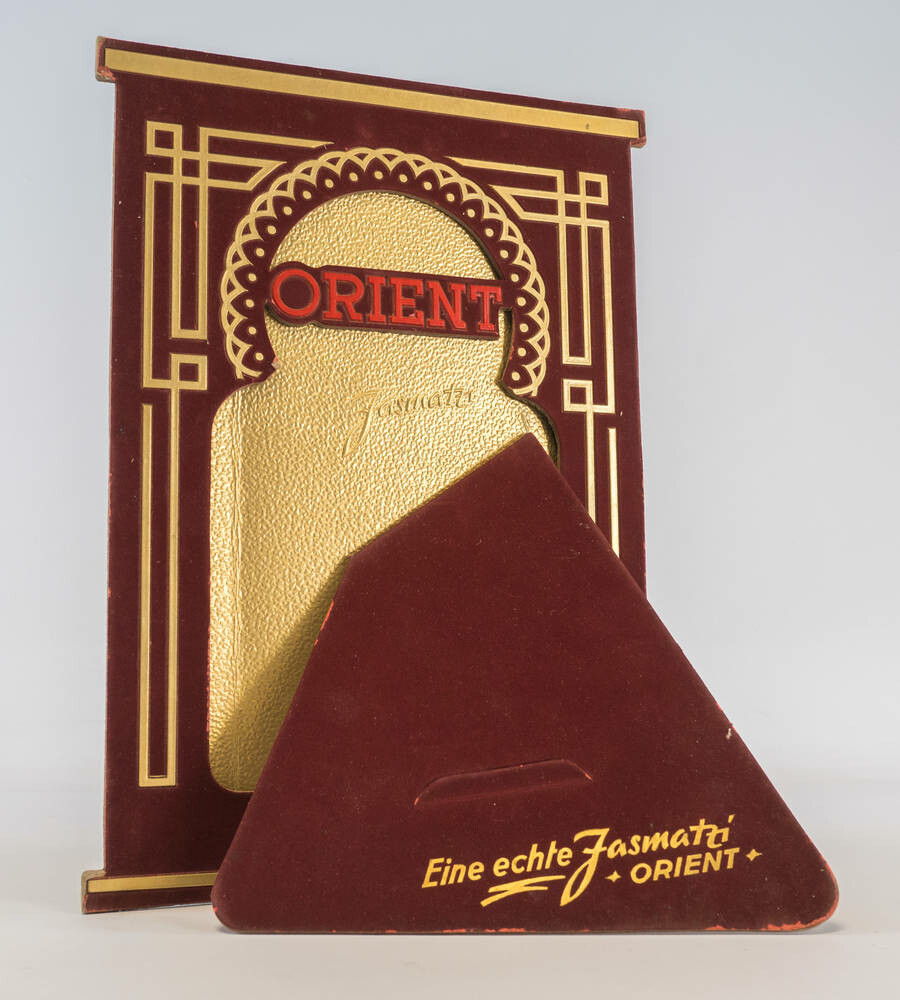 The end of flashy colours, snappy slogans and cute figures

When Erich Honecker took office as General Secretary of the Central Committee of the SED in 1971, the era of funny commercials and posters also came to an end. Four years later, the law banning domestic advertising was passed by the Council of Ministers, which remained in force until the Fall of the Wall. Consequently, the last two decades of the GDR were without elaborate product advertising. The insufficient availability of consumer goods also put an end to GDR advertising. One did not want to encourage desires that could not be fulfilled afterwards.

Editor's note: this text was published as a guest contribution by Nicole Sawicka in autumn 2014. 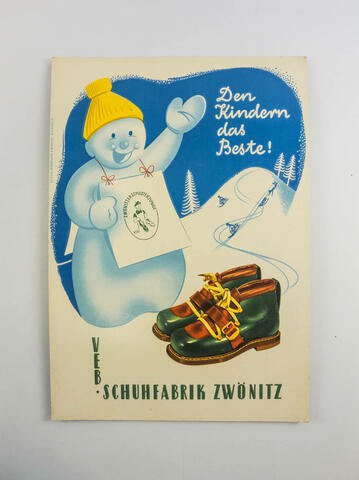 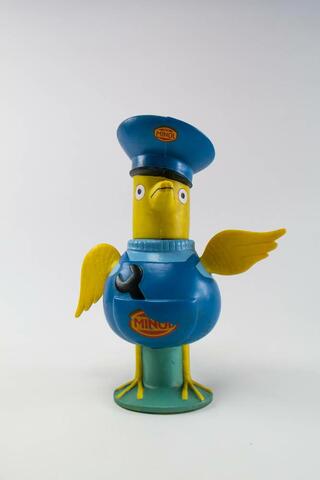 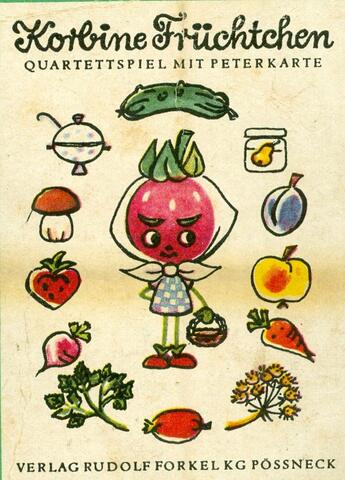 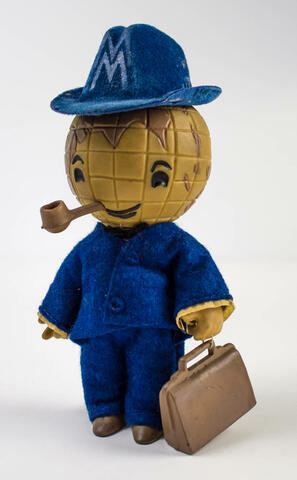 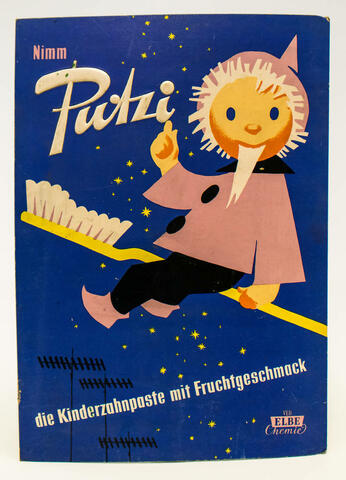 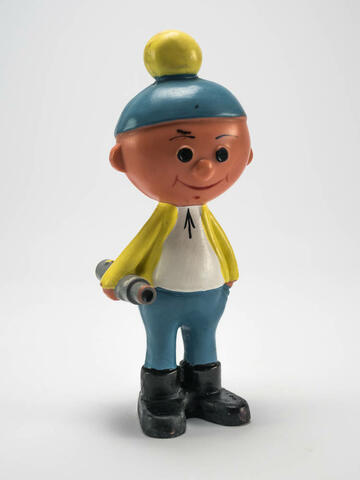 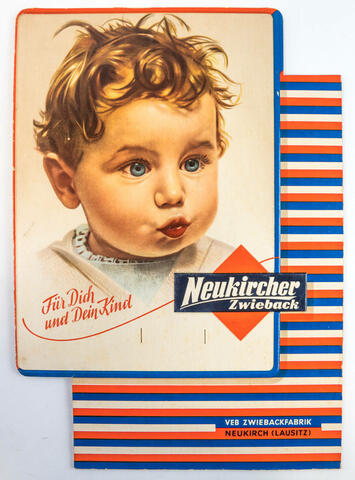 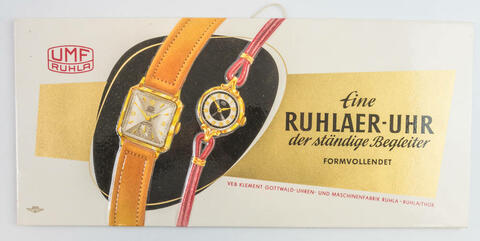 More advertising signs can be found here in the online object database.

GDR Commercials for You