Until this day, the East-German Ampelmännchen remains highly popular, appearing more likable and dynamic than its West-German counterpart. It clearly signals when to cross the street and when to wait for the traffic to pass.
by Admin (6 Apr 2016)

Until this day, the East-German Ampelmännchen remains highly popular, appearing more likable and dynamic than its West-German counterpart. It clearly signals when to cross the street and when to wait for the traffic to pass.

The inventor was the leading traffic psychologist in the GDR Karl Peglau. He presented his first draft to the traffic commission in East-Berlin on October 13th in 1961. The goal was to reduce possible accident hazards resulting out of the increasingly growing road traffic. From a psychological perspective, the original traffic lights were supposed to be equipped with color and shape-signals in order to be registered by pedestrians more clearly. Especially children were supposed to notice the appealing figures. The inventor might have been a little bit anxious about the middle class-capitalistic symbol, the hat, which the Ampelmännchen was wearing. However, the little green and red figures passed the critical observation of the research council and transport officers and were permanently integrated into the streetscape of the GDR. Merely the walking direction was altered: The socialist Ampelmännchen should be walking from right to left.

The introduction of the Ampelmännchen, however, was delayed to 1963. The figures were too big and did not fit the existing traffic lights, which is why they had to be altered in size and detail eventually. Peglau had to remove certain parts such as fingers, ears and mouth. The Ampelmännchen shrank to a total of 16 centimeters. Another couple of years passed until the first testing of the Ampelmännchen became a great success at the boulevard Unter den Linden in 1969. They were suited for blind and colorblind citizens and especially children reacted very well to the colorful symbols.

In 1982, the Ampelmännchen even became popular TV celebrities. The DEFA director Friedrich Rochow used them in his road safety education movies for children as a “Super-Ego” which helped school children with words and deeds. After the German Reunification, however, the cute traffic guards were almost in danger of being thrown onto the garbage. They were taken down and were supposed to be scrapped. Euro-traffic lights were to replace the Ampelmännchen. However, the committee “Save the Ampelmännchen!” was founded in 1997 in order to keep a piece of GDR in the East.

Accordingly, most ministries responsible for traffic in the New Laender issued recommendations to preferrably install the Ampelmännchen from former East Germany. This was especially to be realized at new constructions as well as reconstructions in order to “express the East-German identity”. Former West-German states, however, settled for the Euro-traffic lights. A German-wide exchange was never up to discussion.

In 1995, Markus Heckhausen had the idea to create lamps out of the disused Ampelmännchen. The array of products quickly expanded and a well-known brand was created, which even the inventor of the Ampelmännchen could identify with. Today, the Ampelmännchen remains a highly popular cult object, not only among Berlin tourists.

Pictures: By ANKAWÜ (Own work). 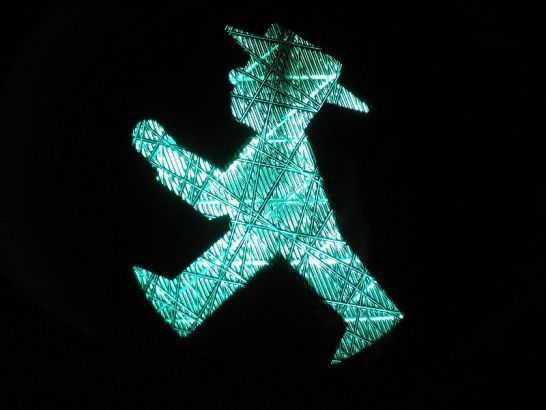 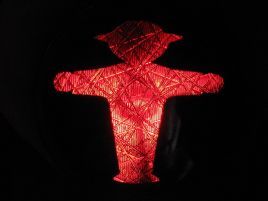 And what should stay? Thoughts on remembering the DDR

Relics of the GDR