Frank Hoffmann has an academic background in History, German philology, Educational Science and Philosophy. After his studies he worked as a scientific assistant at the Institute for German Research at the Ruhr University in Bochum. His research focuses were on German History and Literature since 1945, but mainly on Societal and Cultural History of the German Federal Republic and the GDR (Museum History) and German Applied Geography of the present age.

In his Cultural History of the GDR, which was published in 2014, Hoffmann focuses on specific decades and the respective cultural developments. He is, however, also pointing out certain changes and breaks within the decades. Even though the author is not taking the view that GDR culture is by no means equatable with Cultural and Educational Policy or has been developing in a comparable direction, Hoffmann offers the following classification of the cultural History of the GDR, which he however describes as simplifying:

1961 Construction of the Wall as a short-term intensification

1962 – 1965 Modernization of the GDR: Youth orientation and change of generations, short-term flirt between power and spirit

1976 – 1980 Drastic break, expulsion and criminalization of the artists

In his discussion, the author is only partially following this classification, he rather uses the Cultural and Educational Policy simply as a hanger for the developments in culture, which took place before and after. These developments are also testimony for the obstinacy of the artists and even their critical positions. With the help of examples from literature, the movie and theater scene as well as music and the fine arts the author demonstrates the development of GDR high culture which is characterized by breaks and public interference.

On the other hand, Hoffmann is only barely focusing on popular culture or other forms of culture, considering the usually widely understood term of “culture”, as it is common within the science of cultural history. That said, his publication unfortunately does not offer a complete overview of Cultural history in the GDR, but merely an aspect thereof: Positions of artistic practice. The monograph is nevertheless a scientifically well-grounded paper on this particular aspect of GDR culture and truly worth reading. The work describes the different used and eked out free spaces of persons engaged in the cultural sector within the GDR dictatorship. 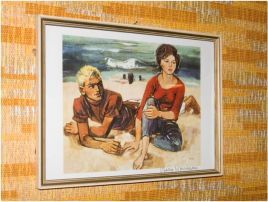 What do you know about the "Ampelmännchen"?