In this article we tell you five suprising facts about the end of the German Democratic Republic. by Admin (19 Dec 2014)

The night of 9th November 1989 was full of excitement as East Berliners poured across the newly-opened border points, curious to see what it was like on the other side of the Wall. Berliners from East and West danced on top of the Wall, embraced strangers in the euphoria of the moment and drank champagne in celebration.

At the same time though, East Germans found the uncertainty about their future unsettling. Many expected the Wall to go up again, and for the border to be resealed. They were also mindful of the violence used by the Soviets to put down the Hungarian Uprising of 1956, and the Prague Spring reforms of 1968, and feared that there would be similar bloodshed in East Germany. Also, after 40 years of anti-Western propaganda, plenty of East Germans had serious reservations about the Western way of life, with unemployment and homelessness being real concerns.

The Berlin Wall stood for 28 years, and during that time, most East Germans were literally walled in and could only travel within the GDR or to other communist countries within the Eastern bloc such as Poland, Czechoslovakia and Hungary.

One notable exception to this rule were old age pensioners, who were allowed to make trips to West Germany. The GDR authorities counted on the fact that older people would be less keen to uproot their lives to the West, and also, since this group were no longer working, it would not damage the GDR economically if they decided to stay. Businessmen and scientists were also sometimes allowed to travel outside the Eastern Bloc. In fact, from February 1982, travel restrictions for East Germans in general eased somewhat, with GDR citizens regularly gaining permission to visit immediate family in the West, particularly if there was a special occasion like a wedding, a funeral, or a big birthday.

It was not therefore as if no East Germans travelled outside the Eastern Bloc after August 1961 when the Wall was put up. The end of the Wall was momentous however, as it led to genuine freedom of movement, which was no longer conditional on permission from the government.

Most East Germans were understandably amazed at the range of goods on supermarket shelves in the West when they visited for the first time. Choice had certainly been much more limited in East Germany. Many subsequently remembered their delight at being able to buy exotic fruit whenever they wanted, or to be able to buy yoghurt in small individual pots instead of large tubs, amongst other things.

Some East Germans later recalled seeing so many East Germans with West German plastic bags as degrading. Those who were content with life in the GDR, and maybe felt that aspects of socialist policy should be incorporated in the new Germany, reacted badly to the East German rush to buy Western goods. It seemed to imply that their lives before had been deficient, when in fact they had had plenty to eat. As one dismayed East German observed, her countrymen ‘seemed content to slurp Coca-Cola and appeared to aspire to nothing more’.

Though East Germans were generally very pleased to gain access to a wider variety of goods, for some, the widespread enthusiasm of their compatriots for Western products made them feel like second class citizens.

No one expected the reunification of the two Germanies to be so hard. Germans on each side of the divide shared a language and a long term history after all. On 10th November 1989, former West German Chancellor Willy Brandt said that the two countries would ‘grow together’ seamlessly. But after 40 years living in very different cultures, the others seemed quite foreign. This growing together has taken a lot longer than anticipated.

Though it was initially a concrete wall that caused the East-West divide, in many ways the impact of division was brought into sharper relief when East and West Germans were standing side by side. Many East Germans commented that the way West Germans dressed, the way they spoke and the way they behaved seemed poles apart from what they were used to in the GDR.

In the 1980s, the Stasi had 91, 000 full time employees on its books, and a further so-called ‘informal helpers’ or informers. This was far bigger than the Nazi’s infamous Gestapo, which only had 7,000 workers. Added to this, over the GDR’s forty year period, the Stasi gathered more paper files than had been collected in the whole of Germany from the Middle Ages to the end of World War Two. Many political opponents, Christians, environmental activists and other non-conformists, had a keen awareness of the Stasi’s activities.

The majority of East Germans did not feel constantly vulnerable and afraid, however: They had no idea of the extent to which the Stasi was intertwined with daily life, and therefore do not remember the GDR as a Stasi-state. The fall of the Wall and the end of the GDR was then by no means experienced as a relief, contrary to what outsiders might think.

*It would be a mistake to overgeneralise East Germans’ reactions to the collapse of Communism. This article represents some of the commonly expressed opinions of former GDR citizens in interviews.

Dr Hester Vaizey is a Lecturer in Modern German History and a Fellow of at Clare College, Cambridge. Her first book, Surviving Hitler’s War: Family Life in Germany 1939-1948, was shortlisted for the Women’s History Network Prize and won the Fraenkel Prize for Contemporary History. Her most recent book, Born in the GDR. Living in the Shadow of the Wall, tells the stories of eight East Germans who went from living under communism one minute to capitalism the next after the Berlin Wall fell. 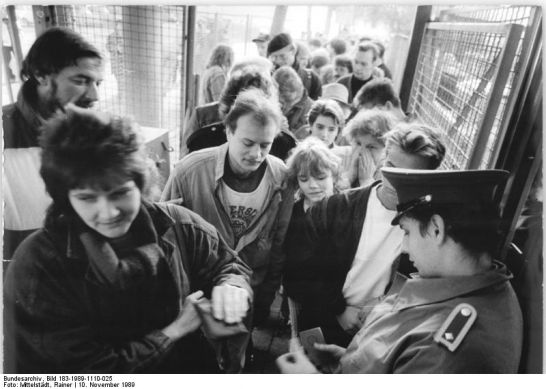 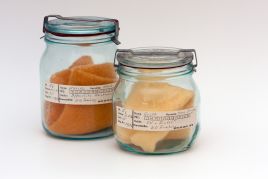 Since yesterday, Berlin has a new place of remembrance: The "Platz des 9. November 1989"

Advertising in the GDR