As soon as winter arrives, the Christmas season is never too far away. To get you in the Christmas spirit, we've picked out 10 Christmas records from our collection that were popular to listen to in the GDR. by Alexandra de León (14 Dec 2022)

We will start with what is probably the GDR's best-known Christmas record – »Weihnachten in Familie« (eng. Christmas in the Family). The record, named after the successful Christmas programme of the same name, hit the shops in 1985 and lit up the GDR. By this point at the latest, the whole republic knew the musical family of the pop singer Aurora Lacasa, with her life partner Frank Schöbel and their daughters Odette and Dominique. From well-known Christmas classics to modern new creations, there was something for all Christmas lovers, and with 1.6 million copies sold, the record is still considered a popular success today! 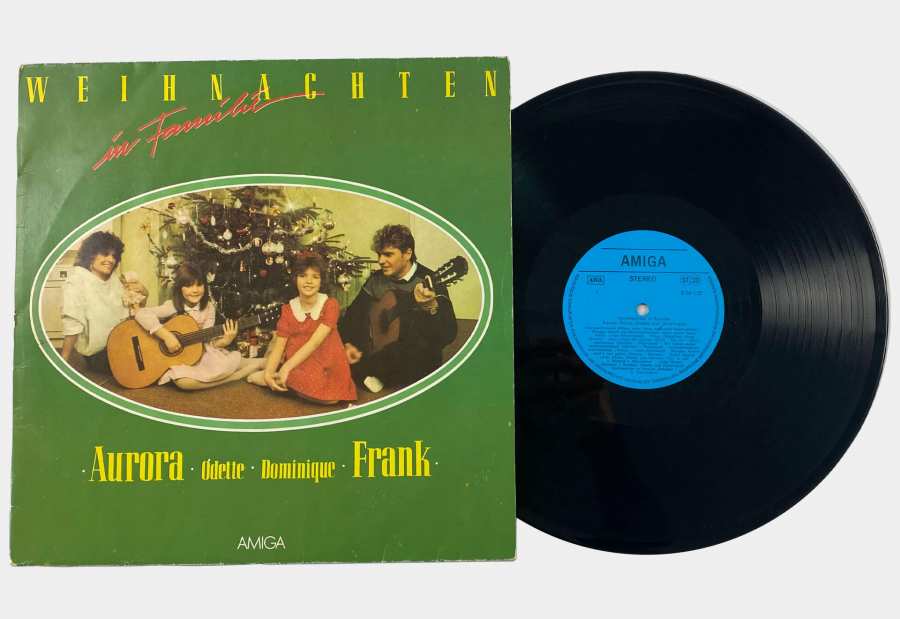 On 2 November 1976, this record, with Christmas songs by the popular French singer Mireille Mathieu, was released. Accompanied by a large orchestra, she sang both German and international Christmas songs in German. Her characteristic French accent enchanted the GDR and the Federal Republic in equal measure. In 1966, she made her GDR debut at East Berlin's Friedrichstadt-Palast. A year later she toured West Germany for the first time and shortly afterwards the Soviet Union. As the »Sparrow of Avignon«, she exceeded all musical limits and became a welcome guest in various television formats in the Federal Republic and the GDR. 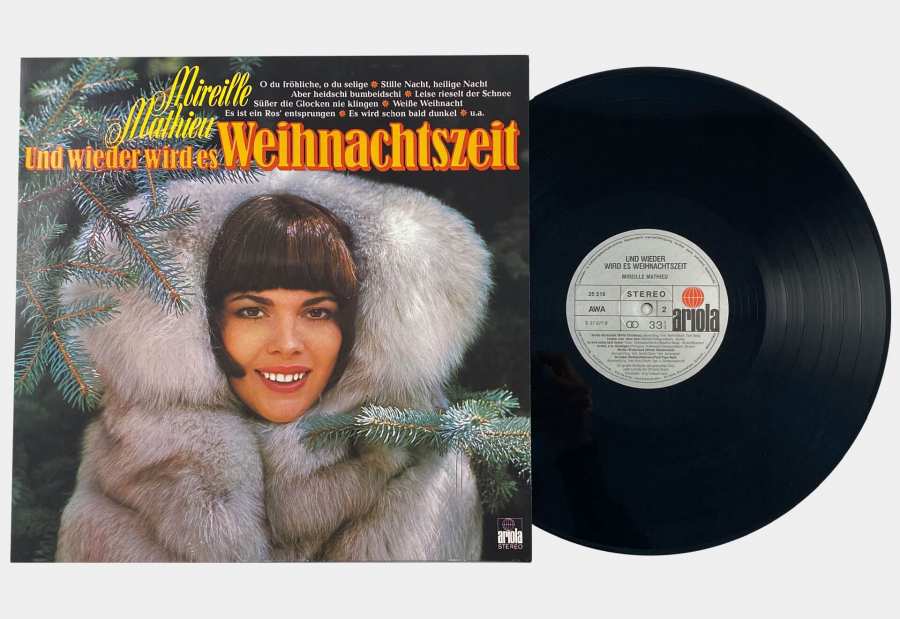 The record »Weihnachtssingen des Dresdner Kreuzchores« (eng. Christmas Singing of the Dresden Cross Choir) was released in 1987. At that time, the internationally esteemed Dresdner Kreuzchor, with its 650-year tradition, had already made some headlines beyond the country's borders. As one of the most important GDR cultural exports, the Crucians not only enjoyed an excellent education, but also had the opportunity to travel for performances from 1979 onwards - and not only to brother states in the Eastern Block. Thus, spectacular and media-effective escape attempts took place time and again. Due to their ideological unreliability, the choir was temporarily banned from travelling, but this did not last long. 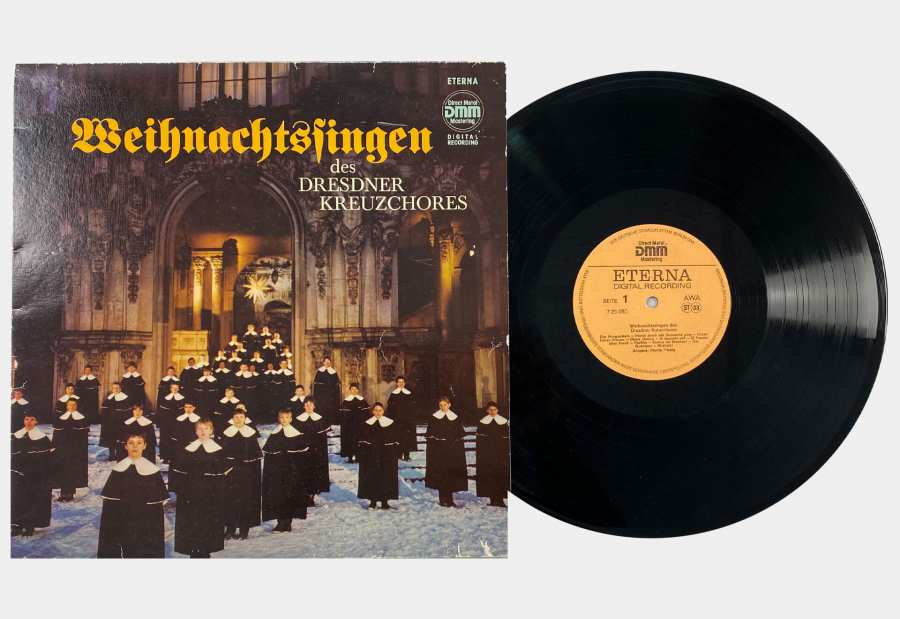 This record with 21 Christmas songs from the music label »ETERNA« was a hit in many living rooms at Christmas time. Produced by VEB Deutsche Schallplatten Berlin, it hit the shops in 1981 and was particularly popular with those who valued a secular celebration. The record managed to avoid religious symbolism as much as possible without losing the Christmas spirit. The songs of the Berlin Youth Choir and the Leipzig Radio Children's Choir, like other Christmas records, were about peace, candles, joy and family. 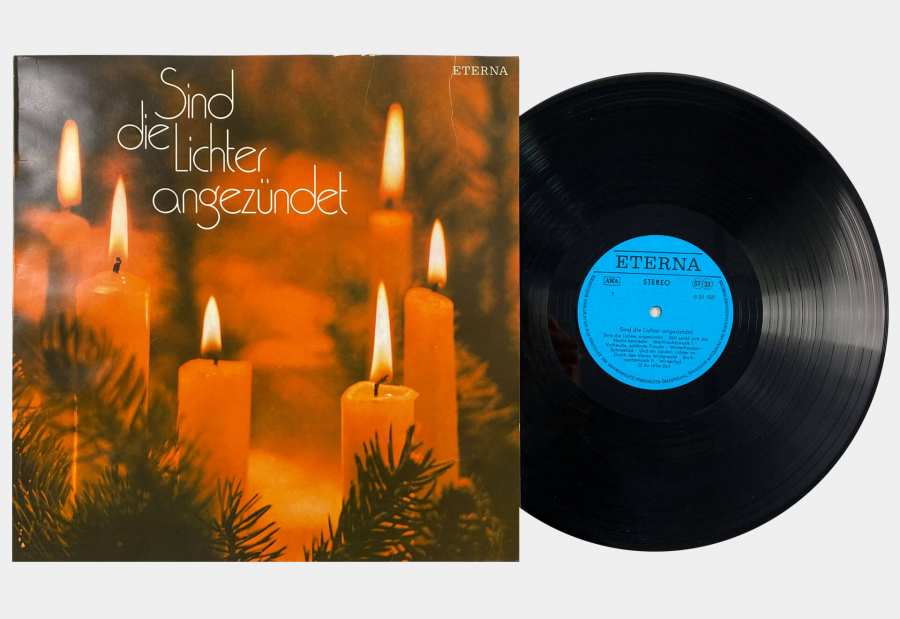 The Erzgebirge (Ore Mountains) has not only achieved a certain fame because of its mining industry. Above all, it is strongly associated with Christmas. With its particularly long winter, the invention of the nutcracker as a turning figure, as well as the candle arch and the production of the smoking men, a fitting record also couldn’t be forgotten. A certain pride in its Christmas reputation can already be seen in the short introductory text about the wintry lifestyle in the Erzgebirge on the back of the record. The mostly local Christmas songs on the record, which was released in 1974, were primarily recorded by musicians from the region. 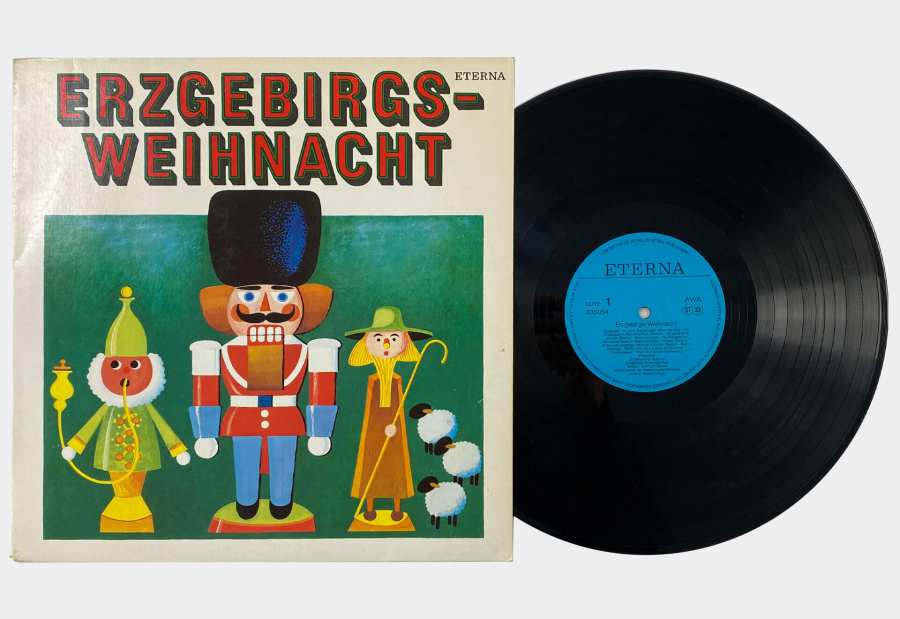 Here the name says it all, but not only the well-known Christmas song was hidden behind the record name. Everyone in search of Christmas classics found what they were looking for on this record, which was released in 1978. The best-known pop stars of the GDR belted out songs from »Eine Muh eine Mäh« to »Stille Nacht«. It was clear that this could only be a production of the record label »AMIGA«. The label achieved the highest turnover with the music genres Schlager, Rock and Pop. 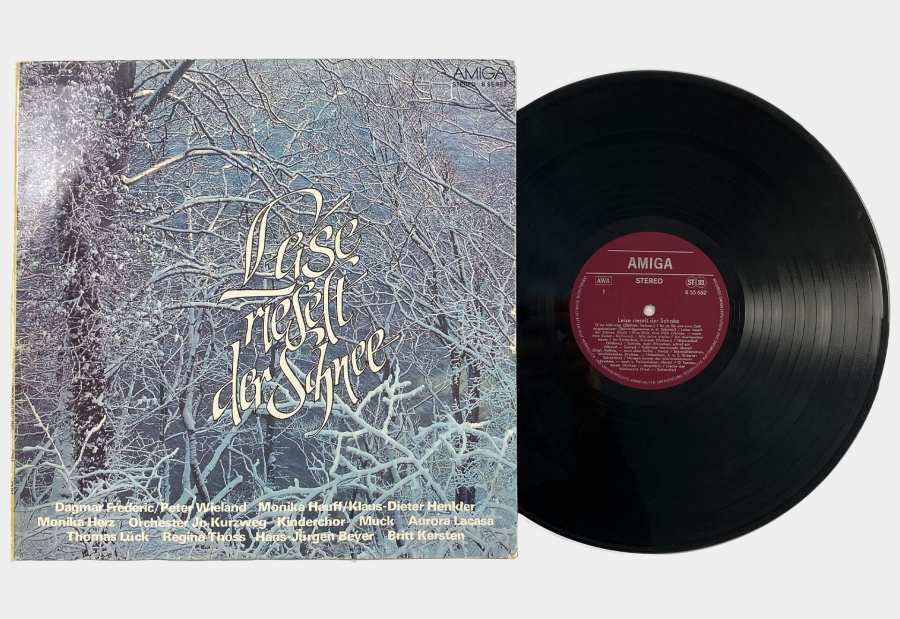 On this Christmas record, various children's and youth choirs conquered the hearts of the GDR. »ETERNA« released the record in 1976, which fit into the typical genres of the record label. From classical music to jazz and church music, the label of the state-owned record producer VEB Deutsche Schallplatten Berlin had a lot to offer. This record was limited to choirs singing one Christmas classic after another. The prices of the »ETERNA« records were fixed by the state and were, just like this one, 12.10 marks. 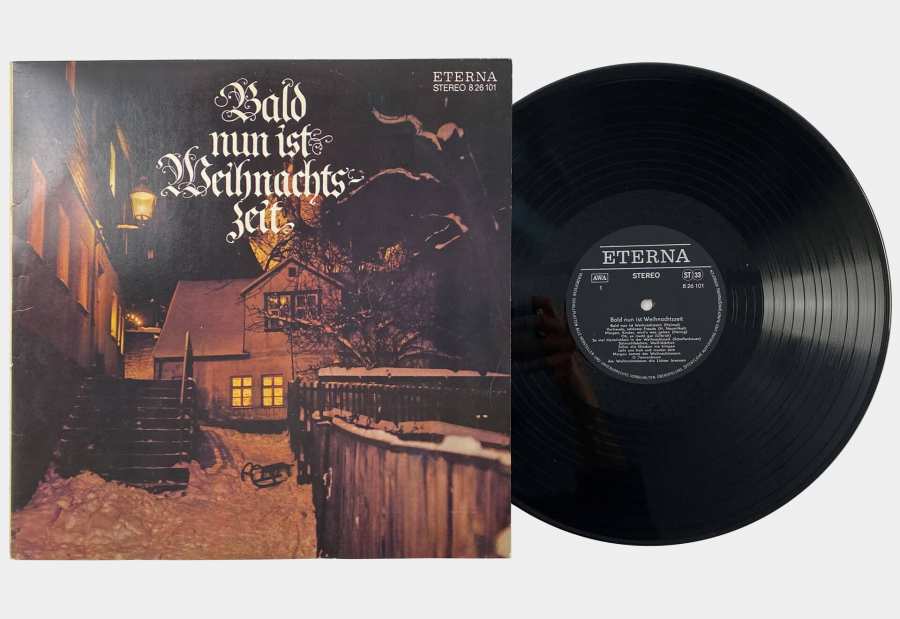 The title of this record refers to a long tradition of Christmas carols. The hymn »In Dulci Jubilo«, which dates back to the 15th century, is mainly sung at Christmas and is, thus, much younger than the Thomanerchor, founded in Leipzig in 1212, which recorded this record in 1969. The choir, which was popular in the GDR, had an 800-year tradition and included children, young people and adults between the ages of 9 and 18, had to take a heavy blow from its own ranks after the fall of communism. The popular cantor Hans-Joachim Rotzsch had acted under the code name »IM Johannes« and spied on his choir members for the Stasi. Before Thomas School Rector Prof. Dr. Heinz Nöbert (»IM Schwarz«), he was the best-known unofficial collaborator who contributed to the over 2,500-page Stasi »Thomaner« file. 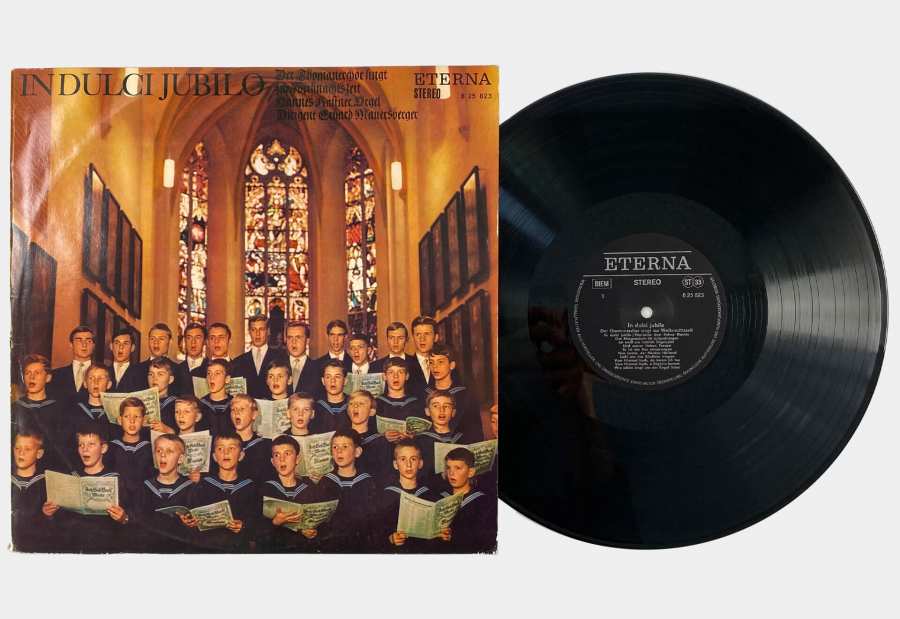 The wintry record »Wie im Märchen« (eng. Like in a Fairy Tale) offered a diverse repertoire of Christmas songs by a wide variety of singers and choirs. Well-known songs and more modern songs in German were placed on one record and ensured that there was something for every Christmas fan. This record from »AMIGA« was more expensive than other copies at a hefty 16.10 marks, but this was usual for long-playing records. 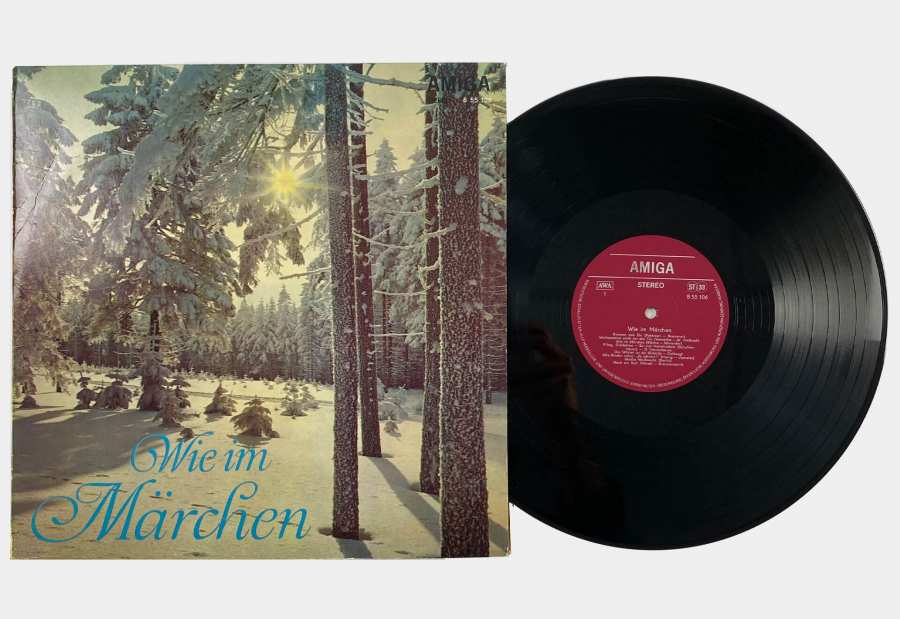 Elvis Presley is particularly associated with 20th-century US rock and pop culture. But the music of the »King of Rock 'n' Roll« also went down well with young people in the GDR from the end of the 1950s. With ducktail hairstyles and leather jackets, the fans were easily recognisable, but the SED leadership could not take anything positive away from this trend. With the 60:40 rule, where only 40% of the songs at events and on the radio were allowed to be from the West, they tried to put a stop to this new music trend. It was only at the end of the 1980s, after the death of the musician, that the SED leadership realised that Elvis Presley and his music no longer posed a threat. They had records like this quartet single pressed in large numbers in the GDR. 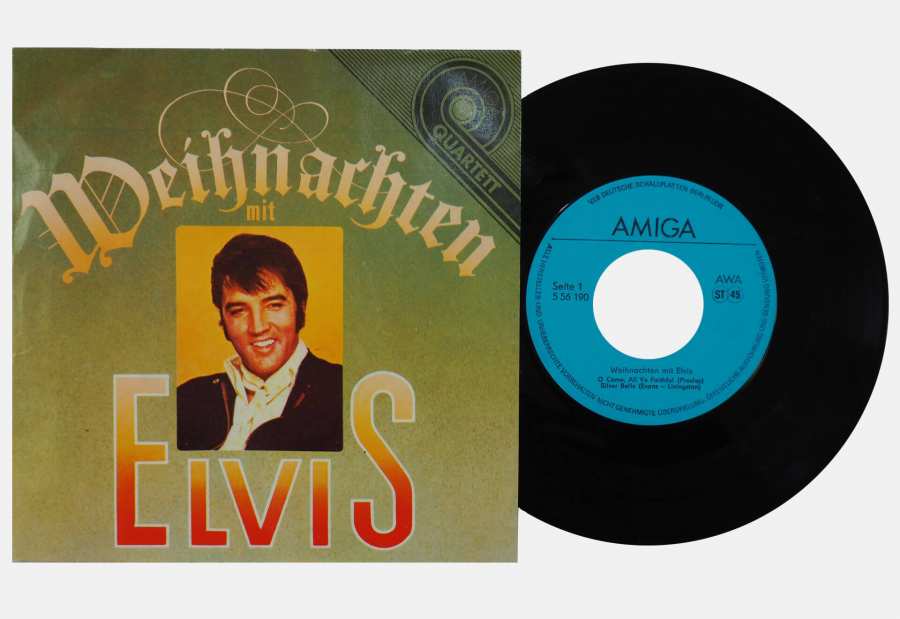 More about »Christmas« from the DDR Museum 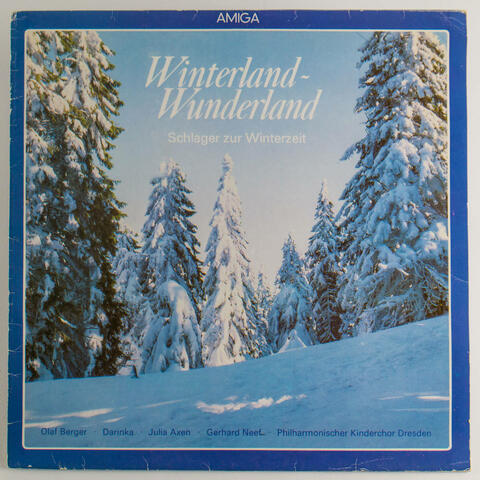 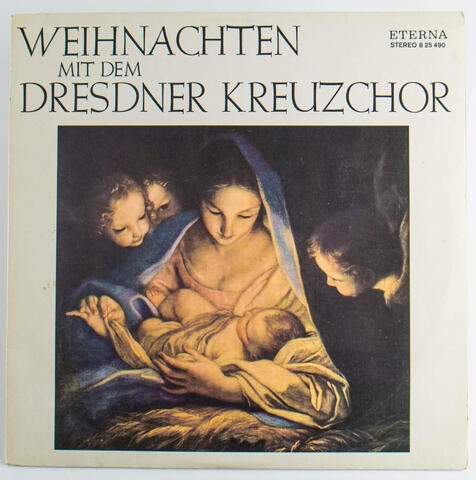 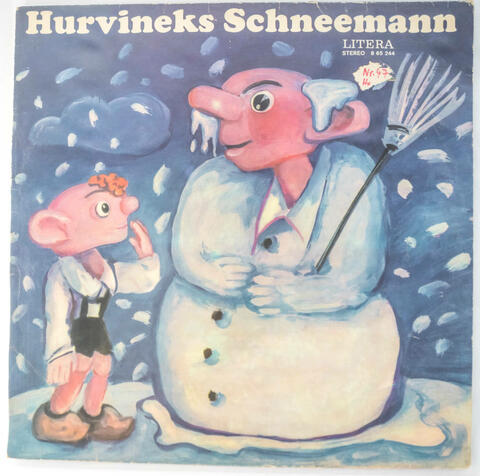 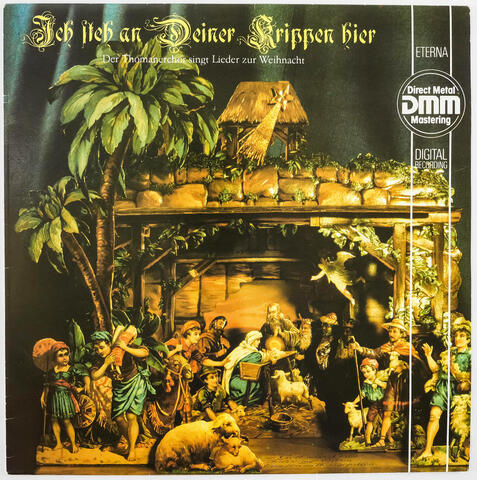 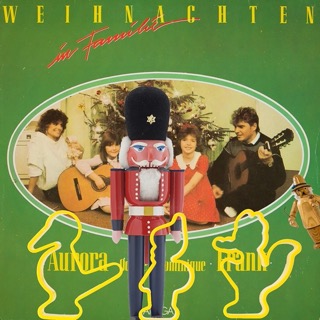 The asylum of Tamara in paradise – the rock group Silly

Wittstock instead of Woodstock - Blues in the DDR