Throughout its entire existence, the German Democratic Republic had a total of three valid constitutions. The original constitution is from 1949, the founding year of the DDR, and consists of 144 articles. Due to the political developments in the 1950s and 1960s a revision of the old constitution was inevitable.
by Admin (11 Jan 2017)

Throughout its entire existence, the German Democratic Republic had a total of three valid constitutions. The original constitution is from 1949, the founding year of the DDR, and consists of 144 articles. Due to the political developments in the 1950s and 1960s (for example dissolution of states, construction of the Wall, Cold War) a revision of the old constitution was inevitable.

In February 1868, the citizens of the DDR were presented with a revised draft of a new constitution; only two months later citizens with voting power were allowed to vote for or against the new document. According to the official data, 96, 37% voted for the new constitution, only 3, 4% voted against it. Compared to the usual 99+% of affirmative votes those numbers showed that an unusually high number of people were not in favor of the draft. The process of the referendum was, by the way, unique in the entire history of the DDR and was canceled from the renewed constitution from 1968. With regards to content the claim to leadership of the SED party as well as the “international solidarity” with the Soviet Union were manifested. While the constitution of 1949 contained a passage where Germany was described as an “indivisible republic”, article 8 of the new version said that the “establishing and care of a normal relationship and cooperation between both German states” was desired. The wish of the founding years to establish an all-German constitution had to yield to the pragmatism and political development of a two-state system.

On occasion of the 25th birthday of the republic on October 7th, 1974 the third version of the constitution came into effect. The renunciation of attempts for a reunification of both German states found its way into the legal text. Article 6, for example, says that “the German Democratic Republic is confederated with the Union of the Socialist Soviet Republics forever and beyond recall. The close and brotherly union guarantees the further progress on the way to Socialism and peace for the people of the German Democratic Republic. The German Democratic Republic is an inseparable component of the Socialist community of states. Along the principles of the socialist Internationalism it contributes to its stabilization, cares for and develops the friendship as well as the general cooperation and the mutual assistance of all states of the socialist community”.

In the course of the turbulent events in the fall of 1989 the existent constitution of 1974 was changed on December 1st, 1989. Among other things, the claim to leadership of the SED party was removed. In the beginning of 1990, representatives of the Round Table even produced a new draft which had a close resemblance to the Basic Law of the German Federal Republic. These drafts were then printed by the publishing house of the German Democratic Republic. One of these rare copies from April 1990 recently found its way into our collection. The cover is designed with the German national colors as well as the logo of the peace movement “Schwerter zu Pflugscharen” (German for Swords to plowshares). Because of the political developments in the course of the March elections in 1990 and the looming reunification the establishment of a new constitution was, however, was omitted. Instead, a constitutional principles law became effective as an addition to the constitution of 1974 in the middle of June, 1990. From October 3rd, 1990 on, the new Basic Law was binding for both now reunited German states. 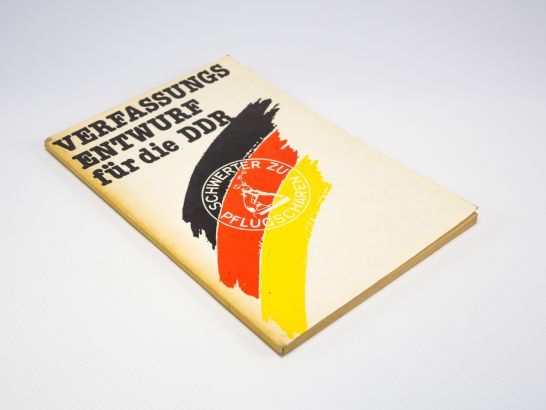