With the currency reform in the three western occupation zones in 1948, it also became necessary to introduce their own means of payment in the Soviet occupation zone, on whose territory the German Democratic Republic was founded in 1949. The article explains and shows the different currencies in the GDR until its end in 1990. by Jörn Kleinhardt (23 Jun 2016)

From the Reichsmark to the »Klebemark« after the Second World War

After the Second World War ended in Europe with the unconditional capitulation of the German Reich on 8 May 1945, the victorious Allied powers – the USA, Great Britain, France and the Soviet Union – occupied their respective occupation zones. From the beginning, the official currency in all occupation zones was the Reichsmark, which had been introduced in 1924 and had survived the turbulent times of the Weimar Republic and the Third Reich. During the transition period until June 1948, the old banknotes and coins continued to be used.

The currency reform of 20 June 1948 in the western occupation zones introduced the German mark. To prevent massive inflation in the Soviet Occupation Zone (SBZ), Reichsmark notes with coupons were issued to the population there from 24 June 1948 in order to limit the total money supply. This became necessary because the Reichsmark banknotes, which had now become worthless, were still a valid means of payment in the western occupation zones and in the SBZ, and many Germans used the confused situation of this transitional period to their own advantage. The banknotes provisionally pasted with coupons were popularly called »Klebemark«.

Less than a month later, the provisional »Klebemark« could be exchanged for new banknotes, the Deutsche Mark (DM) of the Deutsche Notenbank, because only then were enough new banknotes available to provide the population with them nationwide. However, some of the old Reich coins remained in circulation and were only gradually replaced by new ones. Some of these first new designs, such as the 5 pfennig coin, dated back to the Nazi era. On 13 October 1957, the banknotes of the first series were replaced by new designs by decision of the GDR government. Exceptions were the old banknotes of 50 Pfennig and 1 DM. 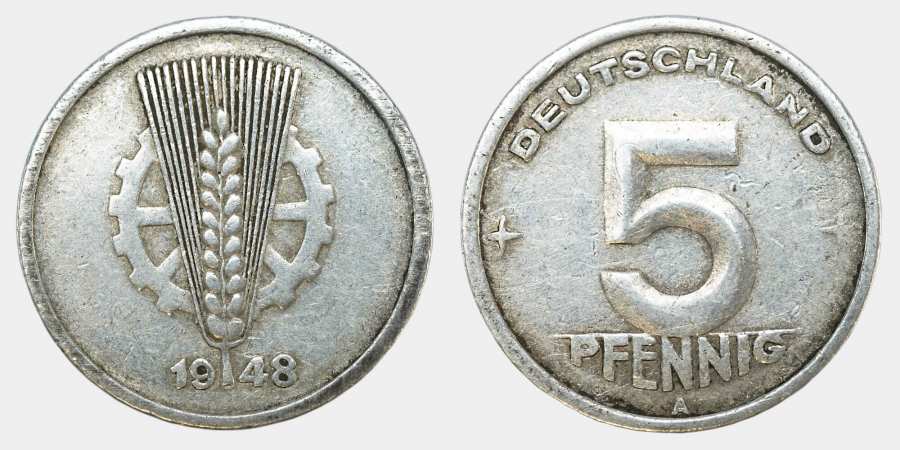 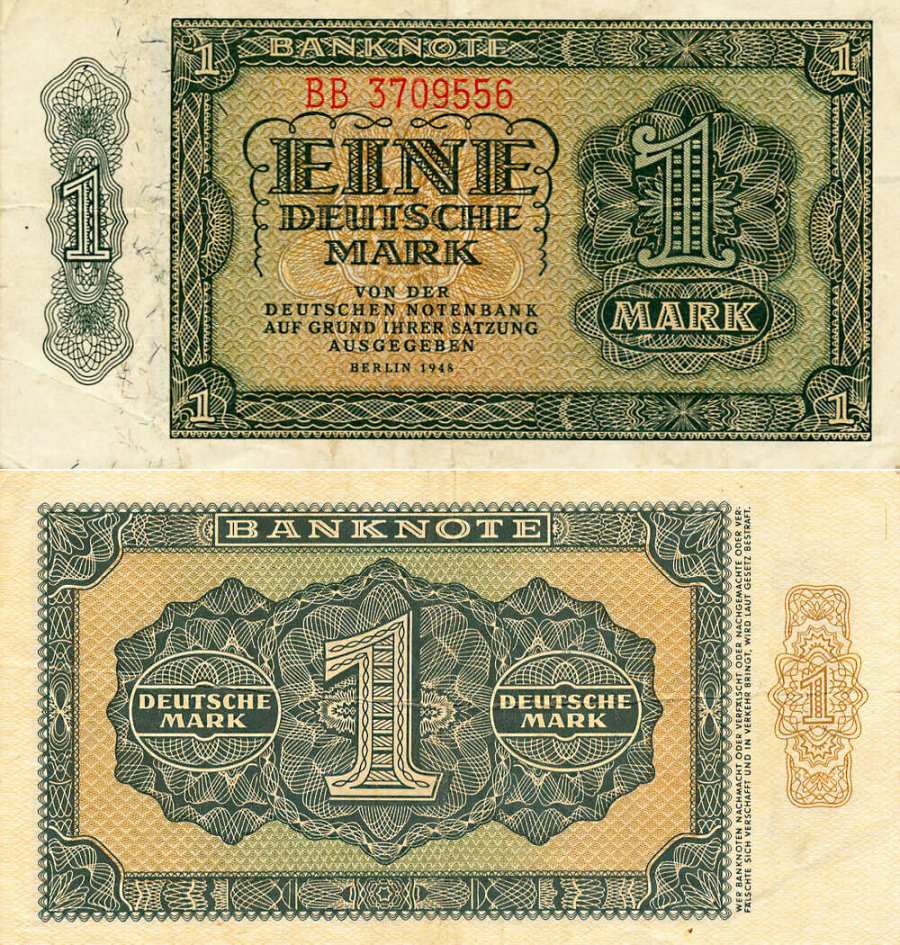 1964 new banknotes and renaming of the GDR currency

New banknotes and coins of the GDR mark in the 70s

Just four years later on 1 January 1968, the structure of the banking system in the GDR was fundamentally changed. The state bank was founded and given the sole right to issue means of payment in the country. In the course of this, money was renamed from Mark der Deutschen Notenbank (MDN) to Mark of the German Democratic Republic (Mark or M). To reflect this, the banknotes and coins were successively replaced by new designs between 1973 and 1979. In contrast to the previous means of payment, the shape and design of the new banknotes were completely revised. The new designs were smaller than the previous banknotes and featured different motifs. The head portraits of well-known personalities on the front, such as Thomas Münzer, Friedrich Engels or Clara Zetkin, were complemented by everyday views on the back. For example, there were views of everyday life at LPG agricultural cooperatives, the view of a young female engineer in the control room of the nuclear power plant in Rheinsberg or the »industrial idyll« of the petrochemical combine in Schwedt. The coinage was quickly nicknamed »Aluchips« because of its material composition. The exception was the 20 pfennig coin, which was made of brass. 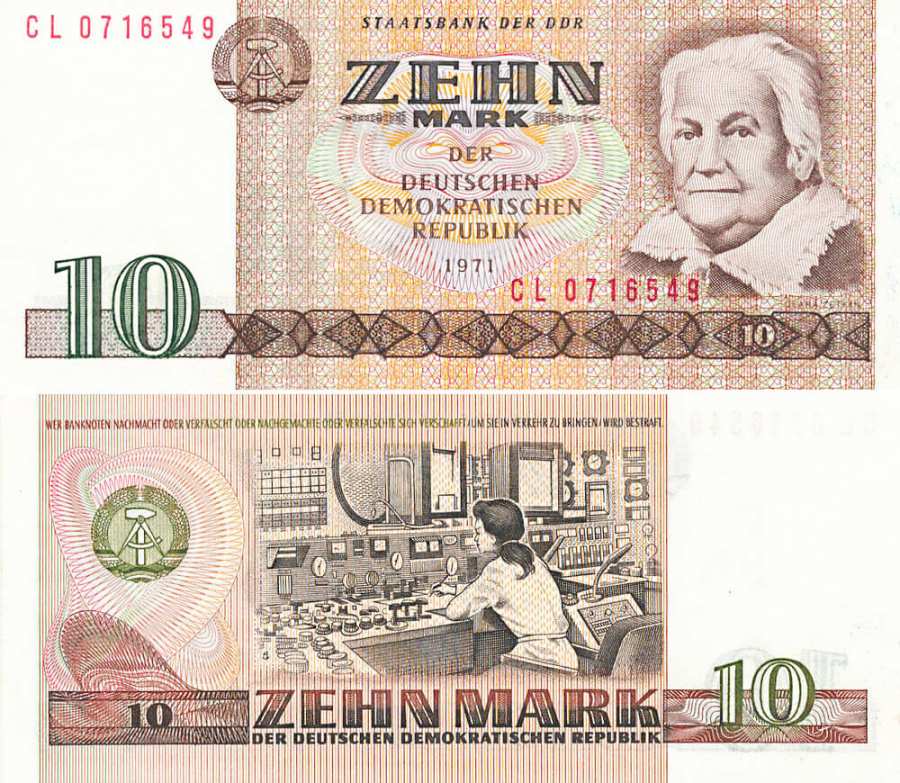 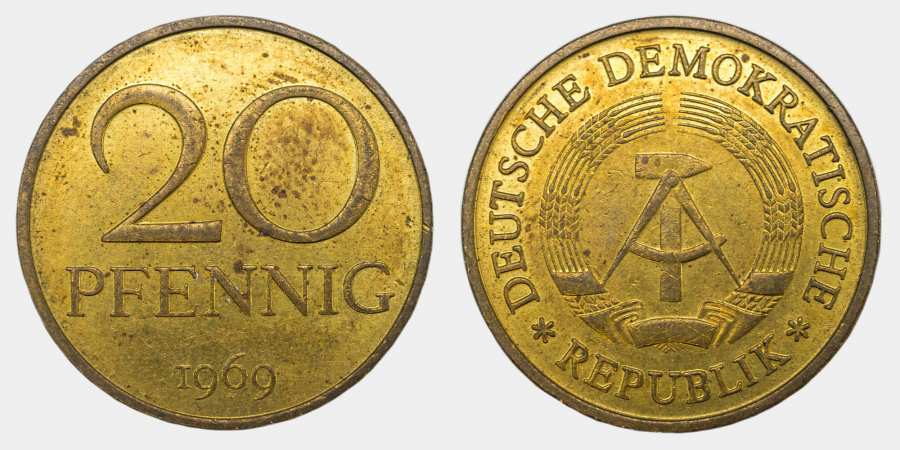 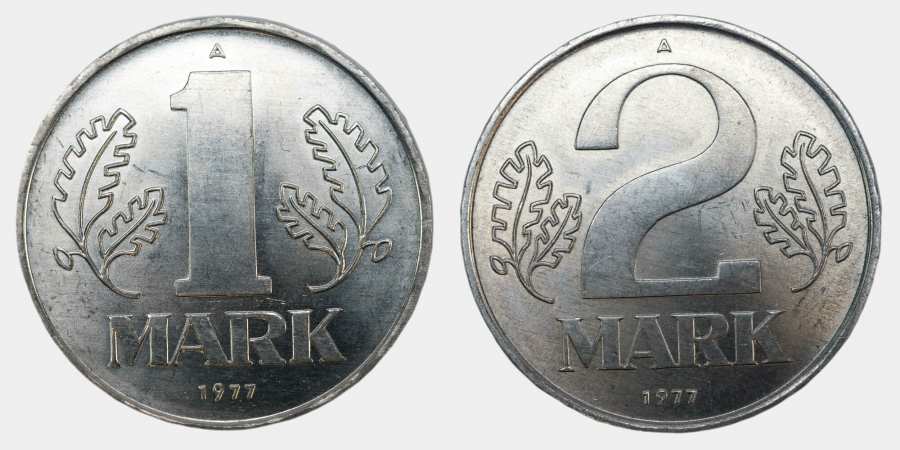 In the course of monetary union in the summer of 1990, the (still) GDR population received the Deutsche Mark (DM), familiar from West Germany, as official means of payment for a few months. In October 1990, the two German states were reunited with the Deutsche Mark as the only valid means of payment. But even the West German DM, which had existed since 1948, only existed for a little more than a decade. On 1 January 2002, many national currencies in Europe were replaced by the pan-European euro.

More GDR banknotes and coins from the collection 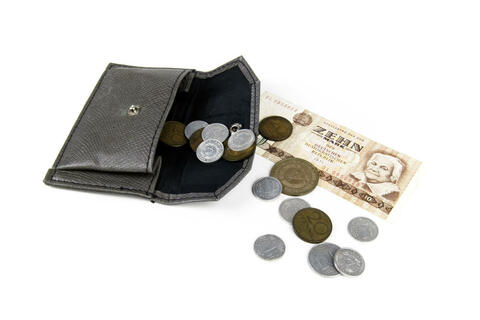 Movie evening presented by “The EXBerliner”

»Original Wolfen« magnetic tape and film production in the GDR