On October 29th in 1976, exactly 39 years ago, Erich Honecker was elected Chairman of the Privy Council by the People's Chamber. At that moment he had been holding all of the important positions in the GDR such as „General Secretary of the Central Committee of the SED“, „Chairman of the National Defense Council“ as well as „Chairman of the State Council in the GDR“ in personal union since 1976. Domestically, Honecker was at the peak of his power. But how did the little „Saarlander“ get into those influential positions? To answer this question, a look into history is necessary at first.
by Admin (4 Nov 2015)

On October 29th in 1976, exactly 39 years ago, Erich Honecker was elected Chairman of the Privy Council by the People's Chamber. At that moment he had been holding all of the important positions in the GDR such as „General Secretary of the Central Committee of the SED“, „Chairman of the National Defense Council“ as well as „Chairman of the State Council in the GDR“ in personal union since 1976. Domestically, Honecker was at the peak of his power. But how did the little „Saarlander“ get into those influential positions? To answer this question, a look into history is necessary at first.

Erich Honecker was born in the district town of Neunkirchen in the federal state Saarland on August 25th, 1912. Growing up along modest circumstances in a working class family, Honecker became member of the local communist youth group already at the age of ten. Further steps of his career in the Weimar Republic were the membership with the „Young Communist League of Germany (German: KJVD)“ at the age of fourteen as well as the entrance into the Communist Party of Germany (German: KPD) at the age of seventeen. When he faced problems finding an apprenticeship position after school, he began an apprenticeship as a roofer at his uncle's business. However, because of his delegation to studies at the „International Lenin School“ in Moscow by the KJVD, he quit his apprenticeship and concentrated on his political career from then on. After he finished his training at the university in Moscow, Honecker returned to Saarland and became district manager of the KJVD of the region. After the takeover of the National Socialists in 1933 the political activity of the communists was only possible out of the underground. Honecker had therefore been arrested numerous times by the Gestapo because of his political attitude and commitment and was sentenced to ten years penitentiary in 1937. The young Honecker spent his prison term at the correctional institution of Brandenburg-Görden. As opposed to many other communists, Honecker survived the years of imprisonment under the National Socialist regime because of good behavior and went to Berlin after the liberation of the prison by the Red Army at the end of April 1945. There, Honecker came into contact with the „Ulbricht group“ merely by coincidence.

In the following year, Honecker was one of the founding members of the „Free German Youth“ (German: FDJ) and took over the presidency of the youth organization. In the same year he joined the „Socialist Unity Party of Germany“ (German: SED), after the parties KPD and SPD were joined forcefully in April 1946. After the founding of the GDR in 1949 Honecker proved himself by organizing the „Deutschlandtreffen der Jugend“ and was admitted to the polit office as a candidate for the Central Committee of the SED in 1950. After the national uprising in 1953 Honecker openly took sides with the chairman of the Privy Council Walter Ulbricht and like that strengthened his position of power within the SED. After three years of political training in Moscow, Honecker became a full member of the polit office and took over the position of „Secretary for Military and Security Affairs“ in the Central Committee. Within this function, Honecker was mainly responsible for the organization of the construction of the Wall in August 1961.

After a political alternation of generations in the USSR, Leonid Breschnew spearheaded the Communist Party of the Soviet Union, a man who derived from the same generation as Honecker. The previous ruler Nikita Chruschtschow was born at the end of the 19th century, just like the head of the GDR Walter Ulbricht. A generational conflict initiated and Honecker recognized his chance to push his former political mentor aside and replace his as head of state since Ulbricht's “solo attempts” concerning politico-economic issues had been causing more and more resentments.

After Honecker was supported by Breschnew in Moscow, the aging Ulbricht was forced to resign on May 3rd, 1971 and Erich Honecker became first secretary of the Central Committee and chairman of the National Defense Council.

The political concept of “Unity of Economic and Social Politics”, which was initiated by Honecker and meant to rise the life standards and the labor productivity of the population, resulted in a mild improvement in the beginning of the seventies. Especially the house building, which was subsidized by the state, was pushed forward, numerous buildings made with precast concrete slabs arose and are characteristic for the appearance of East-German cities and communities until this day. The net income of the working population of the GDR rose by 97% until 1987 as compared to the year 1970. These generous “Social Services” surmounted the economic capability of the GDR. Rising oil prices in the seventies additionally influenced the situation in a negative way. In 1973, the GDR, just like the Federal Republic of Germany, was admitted as a full member to the UNO. The Basic Treaty between the two German states came into operation in the same year, as well. This was Honecker's greatest success with regards to foreign affairs in this era.

In the eighties, the deficits of the failed “Unity of Economic and Social Politics” were visible for everyone mainly due to the deterioration of the existing infrastructure. Environmental as well as other oppositional groups began to form. Also, the aging Honecker was not really able to identify with the political concepts of “Glasnost” and “Perestroika” initiated by Mikhail Gorbachev in the middle of the eighties. In September of 1987, however, Honecker was the first East-German head of state to visit the Federal Republic of Germany and was greeted by Federal Chancellor Helmut Kohl with the according state glory.

Honecker was literally taken by surprise by the opening of the Iron Curtain by Hungary in the summer of 1989. He had simply ignored the signs of the times and had become incapable of action due to aging failure. Nearly two months later, on October 17th in 1989, the head of state was displaced by his former political supporters Günther Mittag, Willi Stoph and Erich Mielke during a conference of the polit office. His positions were taken over by the younger Egon Krenz.

On December 5th, 1989 preliminary proceedings were initiated against him. Honecker was “suspected to have misused his position as chairman of the Privy Council and the National Defense Council of the GDR as well as his political and economic power as general secretary of the Central Committee of the SED” and “to have misused his power of disposition as general secretary of the Central Committee of the SED on his own behalf and on the behalf of others”. After further stays in hospitals as well as short periods of imprisonment, among others in Berlin-Rummelsburg, the expulsed Honecker found refuge with pastor Uwe Holmer, head of the “Hoffnungsthaler Anstalten”, an evangelical institution near Berlin. Only few days before the German Unification of the two German states the by then critically ill Honecker escaped into exile to Moscow.

In December 1991 Honecker was requested to leave the country by the new Russian leader Boris Jelzin. He thereupon escaped into the Chilean embassy in Moscow and hoped for asylum. After almost 6 months, the Chilean government channged its attitude towards Honecker and delivered him to Germany. On July, 29th, 1992 Honecker was flown out to Berlin where he was instantly arrested and taken to the prison in Berlin-Moabit. Just like other leading politicians of the former SED – Nomenclature, Honecker was accused for the many wall victims. In court he claimed political responsibility, but however did not consider himself morally or legally guilty. In January 1993, the arrest warrant was canceled due to his severe sickness and complaints by his defense attorneys. Honecker was immediately flown to his family in Chile. He then died there in political isolation and surrounded by his family on May 29th, 1994. His urn was buried in the capital Santiago de Chile. 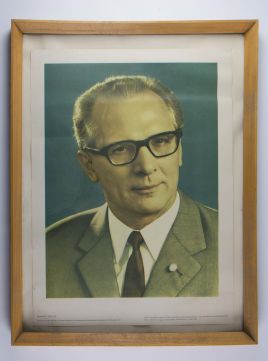 The Green Party in the GDR