A few days ago, the collection of the DDR Museum has been enriched with two "treasures"!
by Admin (25 Sep 2012)

A few days ago, the collection of the DDR Museum has been enriched with two "treasures"!

We received a teleprinter „Telex" and a telephone system which were used by Dietz-Verlag (publisher) during GDR times and were then forgotten until they were rediscovered at the Australian embassy.
One call and an appointment later, we knew that we would be very pleased to accept these donations!

To our great delight the devices were given to us from the ambassador personally!

All documents that address the care and maintenance of the teleprinter were also included, as well as a small blue booklet in which all outputs from the 23.11.1984 were written by hand. Thus, "a" teleprinter becomes "THE" Telex - a contemporary witness who has experienced quite a lot!

On behalf of the DDR Museum many thanks again to Ms. Bornowski, who has set the ball rolling, so to speak, and to the ambassador Tesch, who made time for us (and by the way, amazed us with his knowledge of the Russian language :) )!

Just a few more words about the original owner of the equipment: From 1946 to 1990, the Dietz-Verlag (publisher) was based in the same buildung which today is the Australian embassy. It was the leading publisher of political literature. Its major publications include the works of Marx and Engels as well as the writings of Rosa Luxemburg. 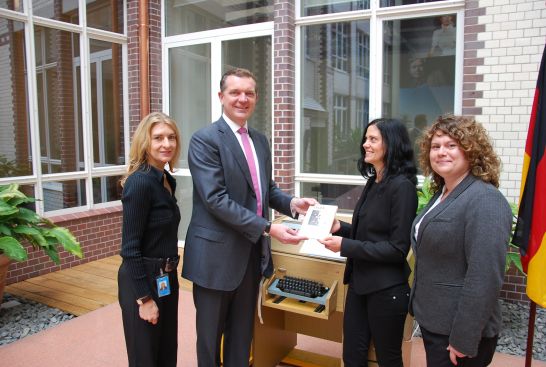 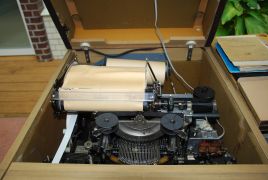 The cable remote controlled tank model of the »T-62«