When World War II ended with the unconditional surrender of the German Reich, the Allied Forces occupied the different occupation zones. From the very beginning, the official instrument of payment was the Reichsmark, which had been introduced already in 1924 and which had survived the turbulent times of the Weimar Republic as well as the Third Reich. The old bills and coins continued to be in use during the transition period until June, 1948. by Admin (29 Jun 2016)

When World War II ended with the unconditional surrender of the German Reich, the Allied Forces occupied the different occupation zones. From the very beginning, the official instrument of payment was the Reichsmark, which had been introduced already in 1924 and which had survived the turbulent times of the Weimar Republic as well as the Third Reich. The old bills and coins continued to be in use during the transition period until June, 1948. On occasion of the currency reform which took place on June 20th in 1948, the Deutsche Mark was introduced in the occupation zones. In order to prevent a massive inflation as well as to limit the entire amount of money within the Soviet occupation zone, bills of the Reichsmark with glued on coupons were distributed to the population since June 24th in 1948. This was necessary because the now worthless bills of the Reichsmark were still a valid currency in the Western occupational zones as well as in the Soviet occupation zone and many Germans took advantage of this confusing situation. The bills with their makeshift coupons were soon called "Sticky Mark".

About one month later, the makeshift "Sticky Mark" could be exchanged into bills of the Mark der Deutschen Notenbank ("DM") since this was the moment when enough bills were at disposal in order to equip the entire population. The old currency, however, remained in use for a short while until it was eventually replaced by newer designs. Part of these new designs, such as the 5-Pfennig coin, dated back to the National Socialist era. On October 13th in 1957, the bills of the first series were exchanged for new designs after a resolution of the GDR government. Exceptions were the old bills of 50 Pfennig and 1 DM.

Following a resolution of the Council of Ministers of the GDR, new banknotes were introduced on August 1st 1964. According to the Council, the new bills were supposed to express the nature of the still young GDR. Along with the renewal of the banknotes a renaming of the Deutsche Mark (“DM”) into Mark der Deutschen Notenbank (“MDN”) followed suit. From then on, purchasable goods were tagged with MDN.

Almost 4 years later, on January 1st in 1968, the entire structure of the banking industry was fundamentally changed. The state bank of the GDR was introduced and was given the exclusive right to issue instruments of payment in the GDR. Since the term "GDR" had not been part of the design so far, the Mark der Deutschen Notenbank (“MDN”) was renamed into Mark der Deutschen Demokratischen Republik (“Mark” or “M”). Accordingly, banknotes and coins were gradually exchanged between 1973 and 1979 with new designs. Contrary to the former instruments of payment, the form and design of the new bills were changed entirely. The new layouts were smaller than the previous ones and had new motifs, as well. Portraits of known personalities such as Thomas Münzer, Friedrich Engels or Clara Zetkin were complemented with everyday scenes on the other side of the bill. Among them were typical LPG (Agricultural Production Cooperative) scenes, a young female engineer in the control center of the Rheinsberg Nuclear Power Plant or the "industrial idyll" of the Petrochemisches Kombinat in Schwedt. Because of the quality of its material, the coinage was soon referred to as "aluminum chips". The 20 Pfennig coin, which was made out of brass, was the only exception.

Along with the monetary union in the summer of 1990, for a couple of months the (still-) citizens of the GDR were given the Deutsche Mark (“DM”) which was known from Western Germany as the official instrument of payment. In October 1990, the reunification of both German states took place and the Deutsche Mark remained the official currency. However, the DM, which had existed since 1948, remained in use for only another decade. On January 1st in 2002, many national currencies in Europe were replaced with the pan-European Euro. 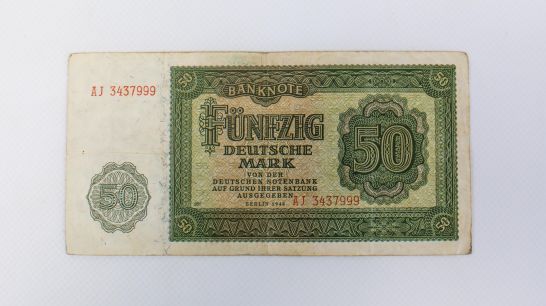 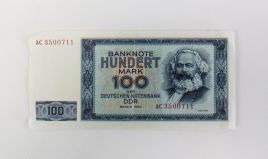 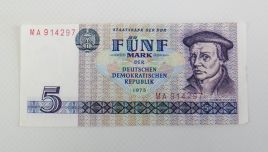 “Constructing Socialism in East Germany - an essay by Stephanie Engelhard

Karl Marx and his influence in the GDR