For women in the DDR, the “Sibylle” was an inspiration as well as an illusion at the same time. Artistically sophisticated photos made by recognized photographers such as Roger Melis, Günter Rössler or Sibylle Bergmann used to adorn the pages. Models were wearing chic clothes which were not available on the market, provoking seemingly utopian desires in the readers. The “Sibylle” was delivering the fabric of dreams!
by Miriam Schaptke (25 Jan 2017)

For women in the DDR, the “Sibylle” was an inspiration as well as an illusion at the same time. Artistically sophisticated photos made by recognized photographers such as Roger Melis, Günter Rössler or Sibylle Bergmann used to adorn the pages. Models were wearing chic clothes which were not available on the market, provoking seemingly utopian desires in the readers. The “Sibylle” was delivering the fabric of dreams: With the help of patterns for sewing, included in each edition, the fashion-conscious reader was able to tailor the favorite dress herself. Fashion photos were only for inspiration – clothing off the rack was never shown in the magazine. The “Sibylle – Zeitschrift für Mode und Kultur” (German for “Sibylle – Magazine for fashion and culture”) was not only filled with fashion – the publication was also dealing with the topics art, literature, travel and theater. Portraits, essays and interviews with famous personalities were characterized by a high journalistic level. Disenchanting things such as following different diets, however, were missing. Those in charge were demanding a high level of quality and content.

“I promise you that I will have my eyes everywhere – in Prague and Florence, in Warsaw and Vienna, in Moscow and New York, in Beijing and London – and in Paris again and again. Of course I know very well that in the past you have been treated, let’s say, rather dilatory. Not everything that you desired was available at all times, and you didn’t want what could be acquired …” says the eponym of the magazine in the first edition of 1956. From time to time, the government used to put paid to the ideas of the editor: Editions were not allowed to be printed because of a provocative exposure of the blue jeans or mini-skirts that were too short. This is also one of the reasons why the founder of the fashion magazine, Sibylle Gerstner, who studied fashion and painting in Berlin and Vienna, was thrown out six years after the first edition: Her style was supposedly too French, too playful. Her style, however, remained nevertheless – not only due to the fact that she gave the magazine her name.

The readership of the East-German Vogue did not only consist of the typical woman in the DDR who was busy with taking care of the children and the household next to her fulltime job and had only little time for reading and tailoring. Especially due to the feuilleton and its extravagance, the magazine mostly appealed to fashion-conscious intellectuals. The pages were not filled with everyday fashion but with fancy evening gowns and chic robes. It was improvised with whatever material was available in the DDR, train stations, storage buildings and ordinary places were used as photo sets. There were no makeup artists; the models were responsible for their looks, themselves. The credo were natural poses and locations, the goal was to animate dreaming inside the grey reality.

In its founding year 1956, the magazine was available for 2.50 Mark and was published six times a year. The edition of 200.000 copies was not nearly enough: The magazine was sold out quickly and was very hard to get by. It was common to share a copy with friends, colleagues or acquaintances, including the desired patterns for sewing. It was first published by the Modeinstitut Berlin and later by the “Verlag für die Frau” publishing company and was a constant fast seller. The magazine did not survive the reunification. Despite all efforts, financial reasons were responsible for the end of the magazine in 1994.

On the occasion of the Berlin Fashion week it is definitely worth to take a look at this special magazine again and to gain some inspiration from the “Sibyllian” charm! The artistic photographs are making the magazine the avant-garde of fashion photography and the Vogue of East Germany. 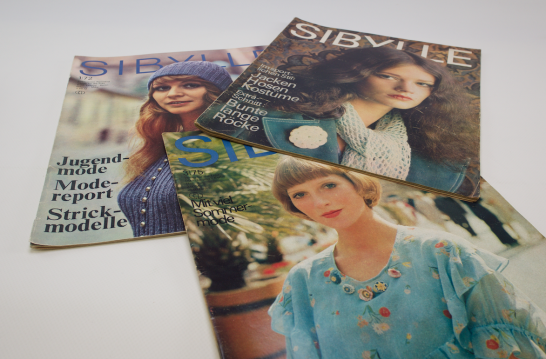 The History of German Parliamentarism: The German Democratic Republic (1949-1989)