The movie "Der verlorene Engel" ("The lost angel") is one of the numerous films which were produced in the 1960s by the state-owned film studio DEFA, but were then prohibited by the party leadership because of their criticism of the system in connection with the resolutions of the 11. plenum of the central comittee of the SED party.
by Admin (23 Mar 2016)

The movie "Der verlorene Engel" ("The lost angel") is one of the numerous films which were produced in the 1960s by the state-owned film studio DEFA, but were then prohibited by the party leadership because of their criticism of the system in connection with the resolutions of the 11. plenum of the central comittee of the SED party.The movies were rated as "politically wrong" and diagnosed as a "threat to the socialist state" and therefore banned. The company Icestorm has released a DVD box in 2015 with the topic "Banned films in the GDR" which we will discuss in the following months in our blog. You can find a review (in German) of the perhaps most well known movie, "Spur der Steine", here.

The movie "Der verlorene Engel" was produced in 1966 under the direction of Ralf Kirsten. It is based on the short story "Das schlimme Jahr" ("The bad year") by Franz Fühmann. The music is by Andre Asriel, among the actors are Fred Düren as Ernst Barlach, Erika Pelikowsky as Barlach's partner Marga Böhmer, Agnes Kraus and Erik S. Klein.

The plot takes place in the year of 1937 and deals with the censorship of art and culture by the National Socialists. The humanistic sculptor, illustrator, graphic artist and playwright Ernst Barlach (1870-1938) deliberately did not let the "Brown ones", as the protagonist refers to the Nazis, influence his art. His works were therefore classified as "Deformed Art" in connection with the "purge of humanist works" by the Nazis and was desstroyed as well as removed from numerous public collections and displays, among them numerous memorials the artist had created in honour of the victims of the First World War. In 1937, Enst Barlach faced an exhibition ban by the Imperial Chamber of Fine Arts.

The movie begins with an aerial view of the town of Güstrow in the north of Germany as well as the Güstrow cathedral, where the bronze sculpture "Der Schwebende" ("The Floater") had been on display since 1927 and which the movie's title is referring to. Shots of memorials created by Barlach, which were removed or destroyed by the National Socialists, are following. It is shown how men of the Sturmabteilung (SA, literally "Storm Detachment") are forcibly taking down the sculpture at the Güstrow cathedral in a cloak-and-dagger operation. The only thing that is left are the now empty metal hooks which were holding the sculpture. Barlach is informed about the incident by a phone call his partner Marga answered: "The Nazis took the angel!", she lets him know. The artist flees into an interior monologue where he is moaning about his art lacking relevance and the fact that his artistic license is increasingly being restricted: "Un-German you are. Victims of racist down-breeding, creatures of a cultural Bolshevik. […] Nobody needs Barlach anymore."

The film furthermore shows the artist's encounters with other people whom he seems to distance himself from increasingly. He feels disrespect for the people who are following the "Brown ones" and still believe in peace. As early as 1933, Barlach was aware of the existance of Concentration Camps and the systematic persecution of minorities. In a flashback to the year of 1914, when Barlach still identified himself with the German state and perceived it as "his own nation", the increasing self- doubt of the artist is being illustrated. This sentiment has reached such an extent as that Barlach is yearning for death as the only way out in order to finally get some peace: "Who does the German nation belong to? To me or the Brown ones? I am an immigrant within my own counry." His inner conflict concerning his own political orientation is also shown quite clearly: "The Brown storm has driven me into the far right, who would have thought. […] I have never belonged to the right, those have intuitively always been my enemies." The movie ends with another depiction of the removal of the angel's sculpture: It is literally being knocked off its metal hooks and is being dragged away by a rope around its neck - a symbol for the unscrupulousness and degrading radicalness of the National Socialists. The sculpture "Der Schwebende" has never been found again. After the Second World War, however, a replica has been installed at the Güstrow cathedral and can be viewed there till this day.

The movie which had been banned by the central committee of the SED in 1966 was shown again in GDR movie theaters since 1971. It was, however, shown in a version shortened by 20 minutes. The content of the removed material remains unknown. Among the communicated reasons for the ban were the movie's "washy philosophical concept" as well as the "indifferent humanistic message". Barlach's work, however, was widely popular during the GDR due to the numerous sculptures representing the simple peasant life in its humaneness and complexity.

The movie "Der verlorene Engel" is a powerful character sketch which skilfully lures the viewer into the emotional life of the artist Ernst Barlach. The fluctuation between self-doubt and not entirely lost faith in a humane and peaceful future for the German nation is impressively illustrated with the help of the many interior monologues occuring throughout the entire movie. Analogies to the political censorship of art and culture in the GDR are clearly noticible and therefore the obvious reason for the rating as a "threat to the socialist state". 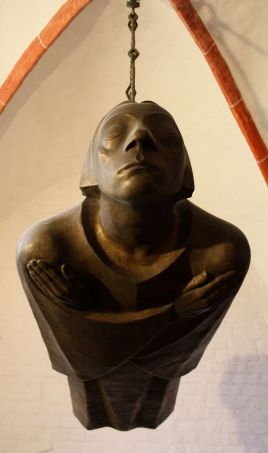