The central ceremonies in remembrance of the Wall's victims and theconstruction of the Wall on the 13th August 1961 took place at the Wall'smemorial place Bernauer Straße in Berlin. There was also a so-called"Info-mile of contemporary history" where many institutions of historicalreprocessing introduced themselves. The visitors were invited to strollaround the place and to catch up at different information booths.
by Melanie Alperstaedt (16 Aug 2011)

The central ceremonies in remembrance of the Wall's victims and the
construction of the Wall on the 13th August 1961 took place at the Wall's
memorial place Bernauer Straße in Berlin. There was also a so-called
"Info-mile of contemporary history" where many institutions of historical
reprocessing introduced themselves. The visitors were invited to stroll
around the place and to catch up at different information booths.

My collegue and I were there at about 11.30 am and were finished with the booth's setup at 12pm when the minute's silence started. Unfortunetaly there was so much excitement going on so that many people did not even notice the minute's silence. Therefore a lady called out in the crowd to raise attention for the action however it was almost too late anyway. After a few seconds of bell-ringing everything was over.

The audience was very mixed, there were families, older people but also
several tourists strolling around. Many of our visitors knew the DDR Museum already but there were also a few people who were surprised because they did not know about the museum's extension and the by now double sized exhibition.

We were really lucky with the weather! The sun was shining and the
temperature was enjoyable, just the perfect weather to stroll around, to
hold a conversation with the different institutions and let oneself get
informed by them. While walking around I saw many of the partly gorgeous floral wreaths that were placed there in remembrance of the Wall's victims by different parties and institutions.

Despite this serious topic it was a really lovely day. There were many
people everywhere who were interested in our work. That is why many exciting conversations were held and partly older visitors talked about the DDR and how they experienced it. Next to our booth was the Berliner Unterwelten e.V. who we also had a nice little chat with. It was not a proper street festival but it was a place of remembrance with a feel good feeling. Several institutions offered for instance hand-made treats and the atmosphere was affectionate throughout the event. 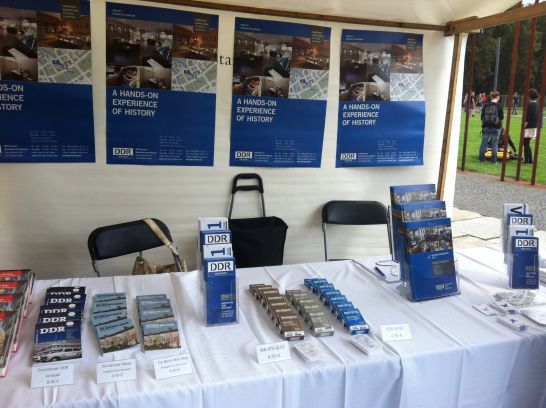 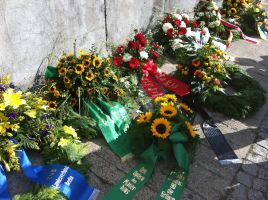 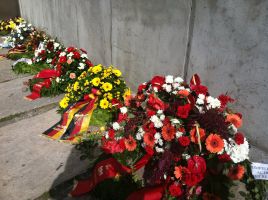