Last week we were visited by Mr. Sullivan, an artist from Great Britain who is currently doing research for his current art project. He was especially interested in the social cohesion and social commitment in the GDR as well as the changes which followed the Wende concerning relationships within the society. by Admin (13 Jul 2016)

Last week we were visited by Mr. Sullivan, an artist from Great Britain who is currently doing research for his current art project. He was especially interested in the social cohesion and social commitment in the GDR as well as the changes which followed the Wende concerning relationships within the society. During a conversation at our visitor center with our scientific trainee Elke Sieber and me, Maria Bartholomäus, scientific trainee at the collection department, we were able to offer our guest some deeper insight into this interesting topic.

Art project about the "Brexit"

It can hardly get more up-to-date: Mr. Sullivan is an artist living and working in the British county of Essex. His art project is about the – by now decided – exit of Great Britain from the European Union and the opinion of the British society about this development. He is dealing in particular with topics such as patriotism, nationalism and relationships among the society concerning values such as helpfulness, cooperation and solidarity. In order to gain proper information, Mr. Sullivan has interviewed and filmed many people with all sorts of opinions both in England as well as in Germany. He is going to work the interviews into a film which is going to be shown in a British gallery. In order to get a scientific perspective of the topic, the artist did an interview with our two trainees, which is also going to be used within the film.

Civil commitment in the GDR

Civil commitment in the GDR was, on the one hand, dictated by the political leadership, for instance in the context of so-called Subbotniks, the membership in company-owend sports clubs or by taking part in the organization of pageants on the occasion of state holidays (May 1st, Day of the Republic, etc.). On the other hand, bartering of desired goods (as well as services) was a necessity born out of the circumstances which caused a solidarity among GDR-citizens which nowadays does not exist like that anymore. The planned economy, which was used in Socialism, caused a constant scarcity in different products which was answered by the society with excessive bartering.

The way into a highly individualized society

When the consumer behavior of the former GDR-citizens suddenly and fundamentally changed due to the Wende and the reunification of Germany, there was also a change in the basic understanding of solidarity in the now pan-German society. The new economic conditions as well as those concerning living, working and consuming induced people to concentrate on their own problems and find their place within the new state before they began to think about improving the green spaces on a Saturday afternoon in the context of common welfare. It is therefore hardly surprising that, today, many former GDR-citizens are saying that "there used to be more solidarity back in the day" and that "today, everyone is only thinking about themselves". We also talked about the contemporary scientific rehabilitation of the temporary division of Germany in schools and cultural institutions.

The object shown on the photo is a wooden panel with a metal plate. It reads "Schöner unsere Städte und Gemeinden – mach mit!" (German for "Making our cities and municipalities more beautiful – be part of it!") and was created in the context of a competition for improvement which was organized by the National Front. The competition called for a participation of all citizens in the care and maintenance of public spaces and buildings.

We wish Mr. Sullivan good luck with his art project and are grateful for his interest in our scientific evaluation of this interesting topic! 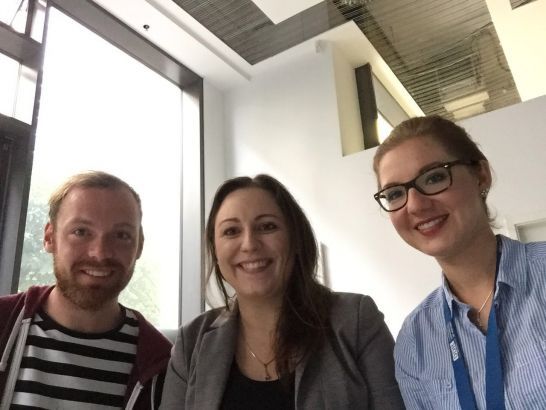 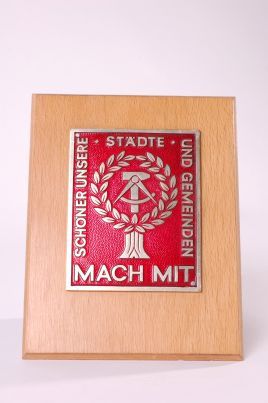 My first visit of the future exhibition space!

With a DDR Museum-Outfit across Berlin