The film distribution company Progress, founded in 1950, had a monopoly in the GDR and brought all movies into the movie theaters, regardless of the fact whether they were domestic or international productions. by Admin (7 Oct 2015)

The film distribution company Progress, founded in 1950, had a monopoly in the GDR and brought all movies into the movie theaters, regardless of the fact whether they were domestic or international productions. Until the 1970s it was common to print small booklets accompanying each new movie and to sell them to collectors and enthusiasts. In 1950, the “Progess Filmillustrierte” was put on the market by the press and advertisement service of the distribution company Progress as an accompanying booklet to all new movies. The company was turned into a Publicly Owned Operation (German: Volkseigener Betrieb /VEB) in 1955. The small booklets in DIN A5 format were usually sold directly at the movie theater for 10 Pfennige per piece and became more and more popular. In contrast to the movie magazines these booklets contained no background information about actors and the shooting of the movie. They merely offered information about the movie topic, the cast and the production team. Some scenes of the film were printed as photographs as well.

Since the mid-fifties, the booklet was redesigned and was introduced under the new name “Progress Film Programm” and with the bigger format DIN A4. Regarding the contents of the booklet only a few changes were applied. Some of the booklets were already printed in color and therefore appeared more modern and appealing. Even though more material was necessary for the production, the booklets continued to be sold for a price of 10 Pfennige.

In 1966 the layout and the title of the series were changed once more. The booklets were published under the new name “Für Sie” until the end of the seventies. The graphic design was created increasingly modern and the issues were also printed in color. Along with the new name since 1966 the price changed as well. The new booklets were available for 20 Pfennige and therefore twice as expensive as the predecessors. The higher price was due to the additional costs for the graphic design and the more expensive color print.

Our collection includes hundreds of these booklets. I have chosen the magazines “Progress Filmillustrierte”, “Progress Film Programm” as well as an edition of “Film für Sie” as examples. The booklet “Progress Filmillustrierte” with the title “Lachen verboten von und mit Charlie Chaplin” (Laughing prohibited by and with Charlie Chaplin) shows Chaplin in his world-famous role as Tramp and is from 1955. The “Progress Film Programm” is dedicated to the GDR chief-American Indian Gojko Mitic and is about the movie “Die Söhne der großen Bärin” (The sons of the big she-bear) from 1966. The copy “Film für Sie” is about the Olsen Gang, which was very popular in the GDR. The Danish movie “Die Olsenbande fährt nach Jütland” (The Olsen Gang travels to Jütland) appeared in the movie theaters in 1972.

On Facebook you can find an album with numerous covers of other booklets as an addition to this blog. 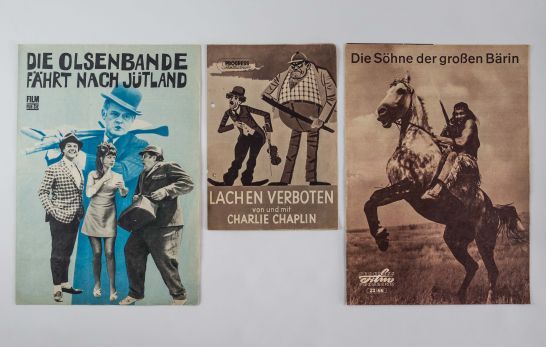