The 7th October 1989 was an important turning point in the history of the Peaceful Revolution in the GDR. At the GDR national day there were a lot of people on the streets, not only for celebrating the SED regime but also for demonstrating against it.
by Admin (2 Oct 2013)

The 7th October 1989 was an important turning point in the history of the Peaceful Revolution in the GDR. At the GDR national day there were a lot of people on the streets, not only for celebrating the SED regime but also for demonstrating against it. The people were dissatisfied with the difficulties of everyday life in the GDR and the political stagnation. Now they found a way to channel their frustration. The number of the small crowd of protesters grew quickly and at the end there were up to 3000 people on the street in front of the Palace of the Republic. Although the protesters were in general nonviolent, the forces of law and order reacted brutally. Many of the demonstrators were arrested and had to bear the repressions of the regime. Especially as political unrest also broke out in other cities in the GDR, it became clear that something was going on in the state.

"But how had such a situation arisen in the first places? Why did the SED regime see itself compelled to proceed so uncompromisingly against its own citizens? And how can it be explained that, less than a year later, the GDR had completely disappeared from the political map, giving way to a united Germany?" (p. 13)

These are the questions the book "The Peaceful Revolution - Berlin 1989/90 - The path to German unity", written by Jens Schöne and published in 2009 by the Berlin Story Verlag, deals with. In 8 chapters the author marks the development to the Peaceful Revolution from the beginning of the GDR and he analyses the consequences of the only successful and peaceful revolution in German history. With a lot of pictures and a coherent structure Jens Schöne tells about the way to the Peaceful Revolution and the German unity. Because of Schönes' narrative style, the book is fluent to read, not only for historians. So if you're interested in German history, especially in GDR history, this book is recommendable because it provides a good overview relating this topic.

The book has 139 pages and was published in 2009 by the Berlin Story Verlag. The price amounts to 14,95€ and you can buy it on the homepage of the Berlin Story Verlag. The ISBN is 978-3-8655-012-2. The author Jens Schöne, born 1970 in Saxony-Anhalt, is the Land deputy commissioner for Stasi files in Berlin and author of diverse publications on the history of the city. 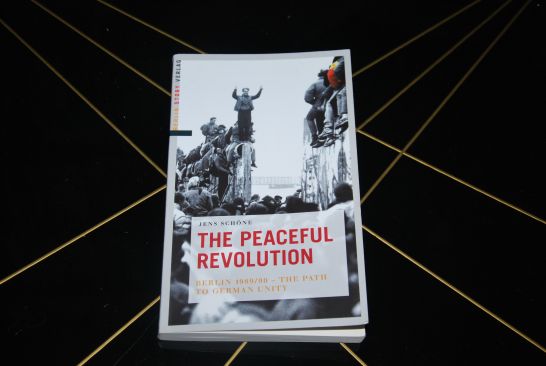 “Scenes and Traces of a Fall. The Berlin Wall in the Eye of the Photographer”