Today I want to present you a slightly different book as I presented the last times. It isn’t a historical book about the GDR, but it is a collection of stories written by authors of the GDR.
by Admin (5 Dec 2013)

Today I want to present you a slightly different book as I presented the last times. It isn’t a historical book about the GDR, but it is a collection of stories written by authors of the GDR. These texts, edited by Therese Hörnigk and Alexander Stephan and translated by Jan van Heurck, reflect the most important features in the literary development of the GDR. The themes, the authors deal with, are the antifascist, democratic roots of the new alternative Germany or the everyday life under socialism. There is “literature of the Building Socialism” and stories which deal with the unification of Germany and historical legacy of the GDR.

The collection includes well-known authors, but also new arrivals. Some of the texts are written by established figures, some by minor authors. Also the opinions of the writers to the GDR are different. Some became dissatisfied with the GDR and moved to the West, others had contacts with the Stasi.

The selection of the texts should show the wide variety of the narrative literature in the GDR, and so there are texts to various themes of the everyday life, women in the GDR, the dealings   with the Nazi past and the end of the GDR. There are texts of Erwin Strittmatter, Anna Seghers, Stefan Heym and others. In total the book includes 36 stories of 36 authors.

In the introduction of the book, written by Alexander Stephan, you get some information about the developments of literary movements in the GDR and at the end there are notes to the authors, just brief introductions and not complete, but nevertheless interesting.

The book came out in the series “The German Library”, a series of the major works of German literature and thought from medieval times to the present. The book costs 25,26€ and the ISBN is 0-8264-0952-0. 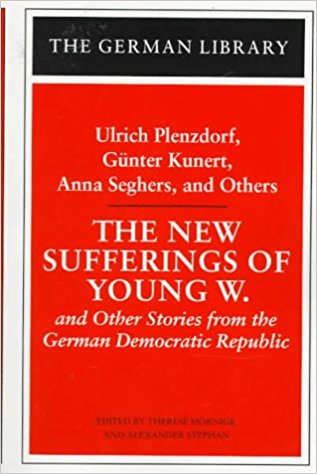 „The Berlin Wall Story. Biography of a monument”