The last two days, I met journalists from two different continents: Mike Kraus from New York and several journalists from Hong Kong. They were filming inside the DDR Museum and they all talked to our chief historian, Mr. Dr. Stefan Wolle.

Mike produces a documentary for the program "World News" on PBS, a public television station in New York (www.pbs.com). Mike was very interested in GDR history and wanted to talk about "Ostalgie", the peaceful revolution in 1989 and the meaning of it for us germans today.

The journalists from China worked for a tv station called TVB (www.tvb.com). They were interested in the GDR in general and especially in the DDR Museum. They interviewed Mr. Wolle inside the authentic GDR livingroom in the exhibition and a famous singer from Hong Kong, her name is Kay-Tse, was the presenter for the documentary. For further information about Kay-Tse, I recommand you http://en.wikipedia.org/wiki/Kay_Tse

For me, it is always interesting to talk to foreign journalists, because they have a special point of view on german history. Mike, for example, asked a lot of interesting questions, which make me see some things from another point of view! 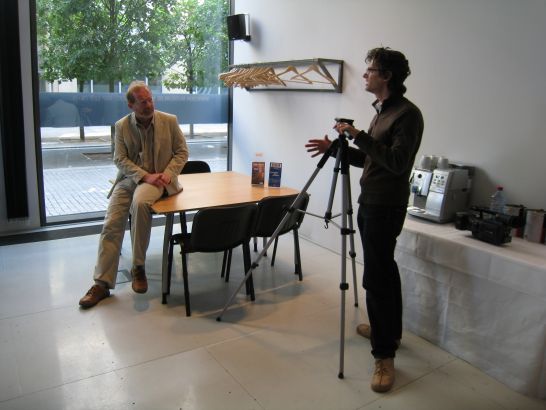 We opened the new exhibition and the new restaurant Domklause

We present: The online shop of the DDR Museum