After the kitchen has been looked at from many different perspectives, today I, the curator, have the opportunity to tell you something about the content of that room. Of course this cannot replace the individual experience of the exhibition itself– however, I would like to make you a little curious about the topics diet, consumation and the role of women in the DDR. by Admin (28 Sep 2016)

After the kitchen has been looked at from many different perspectives, today I, the curator, have the opportunity to tell you something about the content of that room. Of course this cannot replace the individual experience of the exhibition itself– however, I would like to make you a little curious about the topics diet, consumation and the role of women in the DDR (German abbreviation for German Democratic Republic). When you enter the kitchen, at first glance it looks like a regular kitchen in the DDR of the 1980s. The tapestry and the decoration of the room, however, are already telling something about everyday life in the DDR. The uniform way of construction of the Plattenbau along with its uniform floor plans as well as the limited variety of furniture only left little room for individual furnishing of the apartment. The functionally designed furniture mostly had a plain design, and a white kitchen quickly seemed rather sterile. In order to give one’s home a certain degree of individuality and to create a cozy atmosphere within the rooms, all sorts of rustic kitsch were highly popular. Old clay jugs, brass pans or colorful dish towels used to decorate the kitchen; just like they do in our museum’s kitchen. The tapestry is another example for this rustic style. Tiles were typically hard to come by; once you were lucky enough to lay your hands on a small amount of tiles it was far from enough to tile your entire kitchen or bathroom walls. A tapestry, on the contrary, made this possible!

Role of women and gender equality

After opening the different cupboards, the visitor will receive information about the topics mentioned above. The role of women is a central aspect which is – quite provocatively – located around the kitchen’s stove. With the help of numerous examples, the visitor can learn about to what extent gender equality actually existed in the DDR as well as how women were dealing with the new understanding of gender roles which was entered into the constitution in 1949. Following the playful concept of our museum one can discover the contents of rotatable hatches and learn about the demands which were propagated in order to achieve emancipation with the help of a digital quiz. For instance, women were confronted with a multiple burden of household chores, childcare and fulltime work, whereas statistics show that, in comparison, men did not fulfil as many tasks at home. Furthermore, higher leading positions were mostly held by men, there was not a single woman among the members of the politbureau and women were mostly performing low-paid jobs in the service sector. There was, however, an exception once a year when every woman was celebrated by their companies as well as at home. The International Women’s Day took place on March 8th - during the remaining days of the year it was back to normal.

When the visitor looks into the hanging lockers he will discover numerous cans as well as conserved and other kind of food from the DDR. In times of an economy of scarcity, inventory holding was of high significance. Many goods were not continuously available at the Kaufhalle (East-German for supermarket). In order to bring some variety onto the table people used to stock up on cans and even preserved fresh fruit and vegetables in order to have something available in times of scarcity. Fruits and vegetables, however, were not consumed very often. The diet of people living in the DDR was quite fat-rich and heavy on meat. Hearty food, such as escalope chasseur or solyanka, was quite popular. In the fridge you can find some information on peculiarities concerning eating habits in the DDR. But not just like that – only with the help of a transparent touchscreen! Via a touch with the finger the visitor can choose one of the objects from inside the fridge and receive some statistical data such as comparing information between East and West Germany as well as the per capita consumption of meat throughout the years.

For those who want to take the DDR home on a culinary way can do so with the help of our recipe printer. Via a touchscreen you can choose from a number of recipes and print them out. A specific search for drinks, sweets, snacks or entire meals is possible as well. Pictures from DDR cooking magazines will help you with this difficult choice.

There are a number of other drawers and cupboards where the visitor can discover original tableware and household articles from the DDR which can even be touched and looked at really closely. I hope that I was able to make you a little curious about the new exhibition part and that you will visit us soon! 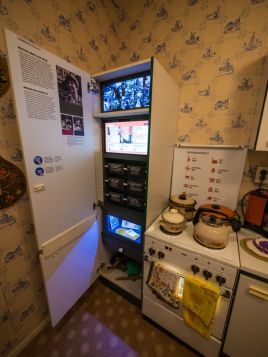 Special exhibition »A nation and its heroes«