Sometimes I’m really surprised at the multiplicity of foreign language offers about the GDR history. You can find not only books, but also movies, homepages, museums and much more else for GDR interested people who don’t speak German.
by Admin (3 Dec 2014)

Sometimes I’m really surprised at the multiplicity of foreign language offers about the GDR history. You can find not only books, but also movies, homepages, museums and much more else for GDR interested people who don’t speak German.

Today I searched online about another offer and found something really interesting. The newsmagazine Der Spiegel has a huge online offer and besides the ‘normal’ German articles there is the section Spiegel Online International. In this section you can find current international news and articles in English, but also there is a really big offer about historical topics.

Two articles I want to present you here, because they touched me as I researched on the homepage. One of them (“The Promise: How a Newspaper Tried to Prevent East Germany from Collapsing") is written by Alexander Osang about his work at the Berliner Zeitung and the experiences he made there during the GDR. Some of them were disappointing like the one he made regarding an article he wrote about the 40th anniversary of the GDR in October 1989. It’s a readable article which gives an impressive insight how the things work in the GDR, also in the newspapers.

Another article tells the story of Mario Röllig, who was imprisoned in Hohenschönhausen. The article by David Crossland with the headline “Painful Memories of an East German Gulag: 'I Thought I Was in a Nazi Movie'" describes the scares Röllig experienced in the Stasi prison. Really impressive is the part about the chance encounter with one of his interrogators in a Berlin department store. It shows how close the victims and offenders live with each other and how the victims of the GDR regime have to fight for approval of the injustice they had to suffer.

I think the other articles are as interesting as this both and so I recommend having a look at the page and searching for some of them. Maybe you find one which impresses you like the two I found impress me! 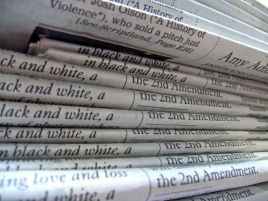