Yesterday's evening was characterized bay the famous and popular Sandmann. Dr. Volker Petzold. Author of the book „The big East-West Sandman encyclopedia" (German edition), abducted the audience into the world of the "phenomenon sandman" and he described the background and history of this "interesting, media-historical character".
by Admin (26 Aug 2009)

Yesterday's evening was characterized bay the famous and popular Sandmann. Dr. Volker Petzold. Author of the book „The big East-West Sandman encyclopedia" (German edition), abducted the audience into the world of the "phenomenon sandman" and he described the background and history of this "interesting, media-historical character".

Dr. Petzold deals with the toppic sandman since nearly 20 years and he is THE specialist for this entertaining figure, which is the only one of the DDR- children's TV which claimed a place in the today's media.

The author talked about his strenuous efforts which he untertook for the research on the subject of the sandman. Further, he gave an insight into his considerable work as scientist and author.

After his studys of chemistry and business administration as well as philosophy/ aesthetic from 1976 to 1984 he has been scientific assistant at the engineer-college in Köthen. From 1986 to 1991 Mr. Petzold worked at the federal secretary's office of the culture-conferderation of the former GDR. In 1990 he worked at the round table of the German-TV broadcasting and was vice-chief editor of the DFF. Since 1993 he deals with film- and TV-historical publications and exhibitions.

Not only the event at the DDR Museum, but especially the presented book accounts for the past of a significant piece of the german media- and culture-history.

In his book, which he declared as a "reunification in the field of the sandman", Dr. Petzold presents the background and genesis of the TV-sleep bringer with selected keywords. By reference to the most important series and it's creators, the author appreciates the more than 10 000 broadcasts in the East and approx. 7000 good-night storys in the West.
Dr. Petzold's lecture has shown impressively, that the sandmann has been more than a simple comic figure. It is a faboulous creature with many centuries-old roots, which existed long before the era of the GDR, e.g. in storys of Hans-Christian Andersen (1843) and as an austrian equivalent named "Traummännchen".
The speaker bestowed the guests to have an exclusive look at a picture of the future sandman-storys. On November 22, 2009 the sandman celebrates it's 50th birthday and enjoys even today great popularity. It remains exciting how the sandman-history continues.

We thank Dr. Petzold for this interesting evening and we are looking forward to the next sandman-event at the DDR Museum. 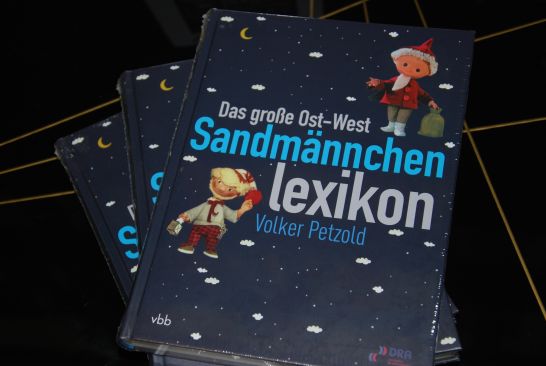 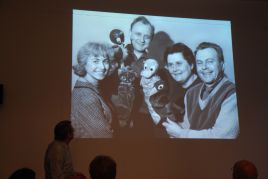 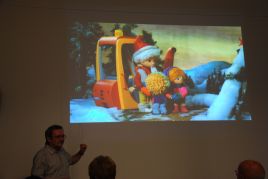 Divided Berlin: a free citymap for our guests!

An Intern's introduction and report on her Internship

GDR Guide – the exhibition catalogue of the DDR Museum