The probably most significant event, which is still considered a distinctive stepstone on the way to the German Reunification, was the publication of the loosened exit determinations for East-Germans on the evening of November 9th in 1989 by the recently deceased former SED functionary Günter Schabowski. Because of the diversity of our team, which consists of colleagues from all parts of Germany as well as of different age groups and educational backgrounds, we were able to collect numerous interesting as well as different opinions. But read for yourself!
by Admin (18 Nov 2015)

The probably most significant event, which is still considered a distinctive stepstone on the way to the German Reunification, was the publication of the loosened exit determinations for East-Germans on the evening of November 9th in 1989 by the recently deceased former SED functionary Günter Schabowski. The party leadership decided that private trips to foreign countries could be applied for without any required conditions. During the same night, a large number of East-Germans went to visit the inner-German border crossings – the people did not trust the authenticity of the new regulations by the GDR leadership and wanted to assure themselves about the feasibility of the new conditions. Accordingly, the Wall began to fall on this night; metaphorically at first, soon even physically – resulting in a reunited Germany. Because of the turbulent events on the evening of November 9th and the following days as well as the unique mood – especially in the divided city of Berlin – which was characterized by euphoria, optimism and an atmosphere of departure, many people have very specific memories related to these eventful days. On the occasion of the 26th anniversary of the fall of the Wall last week we took the chance to ask some of the staff members of the DDR Museum – what do they associate with this special event? Which personal changes occurred for them resulting from the German Reunification and how do they view the discussion of the topic in today's German educational system? Because of the diversity of our team, which consists of colleagues from all parts of Germany as well as of different age groups and educational backgrounds, we were able to collect numerous interesting as well as different opinions. But read for yourself!

In case you very already old enough: How did you experience November 9th in 1989? If not: Which memories about this day did family members or friends share with you?

Those who have consciously experienced that day are describing it as a special day on which everyone knew that world history was about to happen. Whether at home, at school or on the streets of Berlin, an excited tension was sensible among the people because of the breaking news. A colleague growing up in West Germany at the time described her experiences at the Kurfürstendamm, a main street in West Berlin, on the afternoon of November 10th: “The atmosphere was unique! […] If I had only one word to describe it, it would be this one: joy.”

The answers also clearly showed that the impressions differed according to different cities and regions. Therefore the dimensions of the event were described as more noticeable in Berlin than in places further away from the border.

Which role did the Wende play for you personally?

Answering this question clearly depends on the specific regional origin of the interviewees. Accordingly, the Wende resulted in great personal changes for colleagues who lived in the GDR during the fall of the Wall. One of them described his experiences as follows: “For me, a lot has changed – the school system, colorful goods in the stores, the world was open to everyone at once. But at the same time the solidarity between the people instantly faded!” On the other hand, those who were born after the Reunification did not experience any significant changes, as well as those staff members who lived in West Germany. One of our colleagues from West Germany could not tell of any major personal changes since her family did not have any family or friends living in the GDR.

How do you view the discussion of the topic “German Division” in today's society (at schools, in the media, in politics or everyday life)?

Concerning this question, the answers of most staff members tend to go towards the same direction. Many are regarding the rehabilitation of the SED dictatorship as one-sided and undifferentiated. Both colleagues from West and East-Germany mentioned that they consider the exploration of the topic in the educational system as insufficient, if not non-existing. One colleague shared the following thoughts: “I often get the feeling that the topic of the second German dictatorship is being hushed up on purpose. […] In my opinion, the topic is covered too unilaterally in the media, in politics or the press.” However, one of our team members thinks that a differentiated rehabilitation of the topic is by all means possible, one simply has to make an effort to truly occupy oneself with the subject: “There should be more discussion than only about the revolution, such as the time after it and what changed as well as in what way.” The collected answers therefore suggest that the German educational system requires some readjustments when dealing with the topic “German Division”, especially when it comes to the complexity of the way towards the Reunification and the contextualization of that specific time.

In the context of the Fall of the Wall, what do you consider as the most significant change? Socially, personally, internationally?

When it comes to this question, most colleagues mention one central key-word: freedom. All staff members who participated in the survey regard the newly won freedom for former GDR citizens as well as the growing together of the German nation as well as all of Europe as the central changing consequence of the fall of the Wall. Freedom of travel and speech are described as precious democratic values, which, thanks to the German Reunification, are now valid for all Germans. Another positive result is the reunification of separated families: “A nation which has been divided for decades is being reunited, families and friends can visit each other without fear and harassment.” - “The most significant change is the consolidation of families”. However, some colleagues also mention negative developments since the fall of the Wall. One of the team members experiences today's society as unfeeling and observes a decline in solidarity and corporate feeling. Other staff members also mention that the end of the Cold War unfortunately did not mean the end of all wars and that the international political power structure is characterized by constant convertibility and unstableness.

On the basis of this brief survey it is clearly visible that each person has their very own and individual experiences according to age, regional origin, family structures and educational backgrounds. However, when it comes to certain questions, a unitary opinion exists across all differences – namely a unrestricted appreciation of the regained freedom for a nation as well as the reunification of a formerly painfully separated country; which even today, 26 years later, is still in a process of fully growing together. 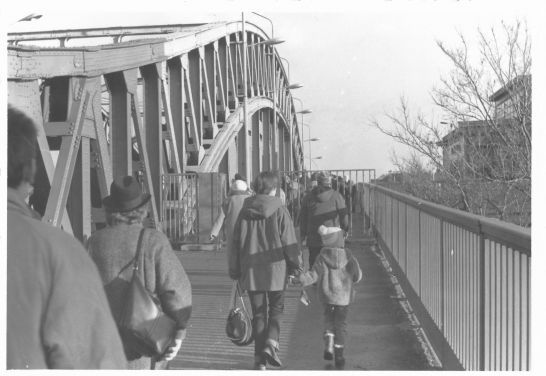 The dioramas are here

The favorite objects of Janine Henschel

Federicas Favorite Exhibit from our Exhibition