Mark Scheppert began writing his stories in 2008 and he intended to write something new and unique about the GDR representative for his generation and not existing so far. Now he published the e-book "Generation Wall".
by Admin (8 Dec 2011)

Mark Scheppert began writing his stories in 2008 and he intended to write something new and unique about the GDR representative for his generation and not existing so far.

Scheppert felt that nowhere in literature about the German Democratic Republic he could picture himself. He did neither belong to the generation of "Zonenkindern" nor lived in "Sonnenallee". He couldn't find his experiences or his youth in other books about the GDR, therefore wasn't able to identify with it. But above all he couldn't associate his feelings and emotions with this time.

He got the urge to write his book because he had the feeling that the "Ossis" have not found their own voice to tell their personal experiences and the stories of their lives with self-assurance until today. Without nostalgia or glorification, nothing about the political past.
But even more than that - Scheppert says the image of the GDR nowadays has almost nothing in common with the one he lived in. He even wonders if a piece of him has vanished with the GDR.

Another reason for writing this book is that he wanted to keep his memories alive. It turned out to be more difficult than he had thought but he was determined to write an honest book that also connects the past and the present.

What came out are 16 different short stories - that are connected though - about events of his family, friends, school and personal surroundings but also about his feelings concerning the totalitarian state he lived in.

All in all, a very entertaining book for everyone and definitely worth reading it! 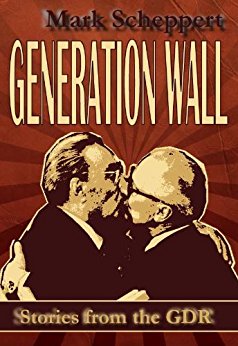