When we decided to portray the private life in the DDR in the form of a newly built flat of the WBS 70 type it was soon obvious that we wanted to add some sort of haven outside of the 4 Plattenbau walls.
by Sören Marotz (14 Dec 2016)

When we decided to portray the private life in the DDR in the form of a newly built flat of the WBS 70 type it was soon obvious that we wanted to add some sort of haven outside of the 4 Plattenbau walls.

Apart from a tiny den in the basement which functioned as a kind of place to retreat to, a garage which was located near the apartment buildings became our scenery of choice. It could also be used as a workshop or storage room. This is were the omnipresent scarcity of goods evoked creativity. Spare parts, tools as well as material were hard to get by and mechanics were likely to answer reparation requests as follows: "Cant' you fix that yourself?" You were therefore forced to find solutions by yourself. Everyone became a home handyman once in a while and was able to construct, fix and screw. Whether by choice or due to the circumstances – this is where the small paradise of the great tinkerer was.

At the same time, however, an active barter trade with services and scarce goods developed. We are for example showing a crankshaft in the garage which you might not have needed yourself, but which could work just fine for bartering purposes. Just like the blue tiles – they were rather hard to get by in the DDR which is why the term "blue tiles" was used as a synonym for the West German Mark (D-Mark).

Our garage is an original – it is, however, displayed in a slightly shorter dimension. Before it was installed at the DDR Museum, the garage used to stand on a private property in Berlin-Pankow. We were able to dismount the entire front of this DDR typecast prefabricated garage and put it up again as a part of our exhibition – along with the original illuminated outside light. Thanks again for this donation! Since the garage was not only a place for handicraft work, we also put a Schwalbe as well as an empty canister and a spare wheel inside of our garage. In the shelf at the wall there are different cleaning supplies, glues and of course Elaskon K60 which saved the one or other chrome part from aggressive natural brine during winter time.

Next week colleagues from the collection department will write a text about different objects in the garage. 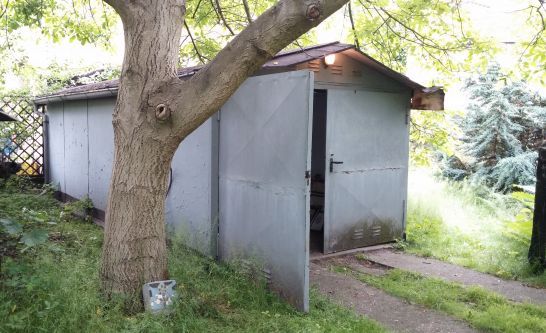 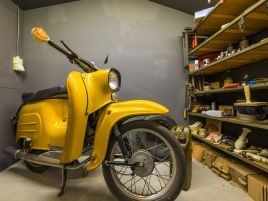