The 9th of November is this year talked of. No surprise, because the Fall of the Wall celebrates this year its silver jubilee.
by Admin (2 Oct 2014)

The 9th of November is this year talked of. No surprise, because the Fall of the Wall celebrates this year its silver jubilee. Everywhere the people remember this event with different activities. That it was not only this day, which let on to the opening of the Wall and the dissolution of the GDR, is often loosed sight of. Because there were rather some days in the autumn 1989, which urged the Peaceful Revolution and had a share to the Fall of the Wall, as the history-charged day in November. Especially highlighted are the days 7th, 8th and 9th of October, on these days there occurred in about 300 places in the whole GDR demonstrations against the illegitimate state of the SED.

The 7th of October 1989 is regarded as turning point in the Peaceful Revolution. On that day, the 40th Birthday of the GDR, several thousand people took to the street in Berlin. The DDR Museum in cooperation with some other institutions wants to remember this day of decision with a special action.

At the Neptun Fountain at the Alexanderplatz will start a revolutions procession at 5.00pm with a performance. On the trail of the demonstration 25 years ago this revolutions procession will go through Berlin, with different stations, memories and performances. Dr. Stefan Wolle, the Head of Research of the DDR Museum, will support the demonstration with historic founded notes and comments. The procession of memories leads to the Gethsemane church in the Stargarder Street. Furthermore the contemporary witness Carlo Jordan and the singer-songwriter Stephan Krawczyk will support the revolutions procession. The route of the demonstration will proceed as follows: Alexanderplatz (Neptun fountain) -> Karl-Liebknecht-Street ->Prenzlauer Avenue -> Wörther Street -> Kollwitz Street -> Senefelder Street-> Stargarder Street -> Gethsemane church.

In the Gethsemane church, the main place of event for the days of decision the demonstation will change over to the further program, which spans three days. There an exhibition about the events of these days in October in the cities Berlin, Plauen, Dresden and Leipzig will be opened at 7.00pm. Besides a multimedia performance and dialogues with contemporary witnesses you can experience among others also musical segments of the duet “sensor” and of Toni Krahl and Fritz Puppel of CITY. The other program you can find here.

For an attendance in the revolutions procession we want to call you all! Only with a lot of people the remembrance will really awaken. You can bring whistles and candles with you!

We will see each other on the 7th of October 2014 at 5.00pm at the Neptun fountain at the Alexanderplatz. We’re looking forward to you! 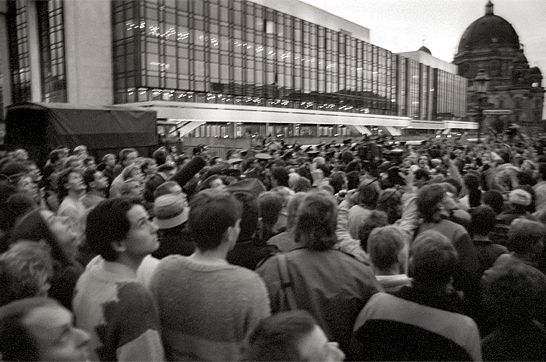 A first visit on our construction site: EXCITING !

Divided Berlin: a free citymap for our guests!