Carsten Kretschmann has a PHD in history and is researching and teaching Contemporary History at the University of Stuttgart. In his monograph about culture he is examining differences and similarities between the inter – German cultural landscape from 1945 until mainly 1989.
by Admin (24 Feb 2016)

Carsten Kretschmann has a PHD in history and is researching and teaching Contemporary History at the University of Stuttgart. In his monograph about culture he is examining differences and similarities between the inter – German cultural landscape from 1945 until mainly 1989.

The author does not view the inter-German culture separately but is rather looking for interdependencies and reasons for the different developments. He also recognizes the fact that culture served as a kind of bridging between the two German states, but that culture nonetheless developed into different directions in East and West Germany. Other topics are cultural and educational policy as well as socio-historical content such as the examination of the skeptical generation as well as the thoughts and ideas of the movement of 1968. A real definition of culture, however, remains missing within this publication. The author is in fact delivering a rather wide understanding of the term as well as the perspective which is going along. Kretschmann is highlighting both high culture such as theater, music, architecture and art as well as low culture such as mass and pop culture. He is therefore including consumer culture and other mass phenomena such as rock and pop music or apartment construction into his considerations.

A considerable part of the book is dedicated to the time of the reconstruction of the country and its culture after World War II. In the beginning, the author states the question whether there has really been such a thing as zero hour when it comes to the development of culture. He comes to the conclusion that there indeed has been a consideration of developments and schools of the interwar period such as Expressionist art – even though continuous careers, which have started during the Nazi era, were not necessarily uncommon. The occupying powers also had a considerable influence on the cultural development of both German states, which quickly led to a contrary development. In both states, however, the goal was the same: A new culture of a better Germany was supposed to be developed and there were enough persons engaged in the cultural sector from the occupying powers who were ready to accompany this process. People oriented themselves at the old but were also looking for new connecting factors, processing impressions and determining themselves within the art of the late forties and the beginning fifties. Hereupon, however, the state of the German Democratic Republic began to increase its influence and put a focus on realistic art. In the Federal Republic of Germany, on the contrary, critics were quite influential and contributed a great part to lead the cultural scene into a determined direction, as well. An Iconoclastic Controversy between abstract Western art and the east-German art form of “Socialist Realism” followed. The social development in the Federal Republic of Germany was characterized by taking over American ways of life and consumer culture. In this context, Kretschmann is using the term “short way to the West” which is standing in contrast to Heinrich August Winkler’s thesis of a long-term orientation to the West. The terms “solidarity, sobriety and transparency” are further standing for the West-German identity. The terms “graded middle class society” and the “skeptical generations” are supposed to confirm this evaluation. The East-German identity was also based on a missing discussion of the National-Socialist crimes which was officially referred to as Antifascism. This illusionary world, however, began to break down both in East and West Germany bit by bit. The impressive peak of this development was without a doubt the protest of the generation of 1968 in the Federal Republic of Germany which also resulted in a generational conflict.

According to Kretschmann, it was these social movements and the initially rather anti-pluralistic movement of 1968 which led to the pluralization of the society in the Federal Republic of Germany. This assumption is traceable within the literature in terms of a focus on the own Self as well as an avoidance of social criticism and political statement. In the GDR, however, art was supposedly a continuation of politics merely with different methods, even though some artists tried to create some free spaces. The author refers to the work Bauernkriegspanorama by Werner Tübke as “treading the borderline of the special kind”. The artist does without a heroic exaggeration of the first German revolution and rather depicts an apocalyptic scenery.

The last chapter “Little border traffic” focuses on the partial changes within the German cultural landscape which the author explains by using the example of architecture. The panel construction from the seventies with its simplistic and functional design, one could even say demure and solid, is being compared to the rediscovery of historical architecture. In both German states, an “ocean of monotony” was created architecturally by executing the “New Construction” which was now to be deconstructed. Flourish and non-modern forms of architecture were en vogue again, be it the Neue Staatsgalerie in Stuttgart or the newly designed Nikolaiviertel in East Berlin. History was also rediscovered in the GDR; especially the Prussian history was supposed to generate a national identity within citizens of the GDR. According to the author, similar tendencies of a collective identity building are also traceable in the Federal Republic of Germany with the help of the “Constitutional patriotism”, as described by Dolf Sternberger. Despite these different constructions of identity, the author recognizes first approaches towards an inter-German culture for the last century of the German division. Despite these new possibilities, however, the relationship between artists and the SED party remained difficult. In the following view on the reunification of Germany, Kretschmann certifies a successful merging of the German cultural institutions. Overcoming the emotional distance, however, remains much more difficult.

A wonderfully diverting nonfiction book which offers many insights into different cultural spheres of the German post-war history and makes the reader want to explore the many subtopics in further detail. Kretschmann’s monograph remains a mere listing of many singular examples which he attempts to put into a certain correlation. A number of aspects, however, remain unsaid or are merely focused on superficially. This might be due to the book’s length of a mere 170 pages on which Kretschmann draws light on numerous aspects of the term “culture” which are actually predestinated for a publication in several parts. The publication is recommendable as an appetizer for the topic of German post-war culture, also because the author manages to do without the excessive use of a rather science driven language. 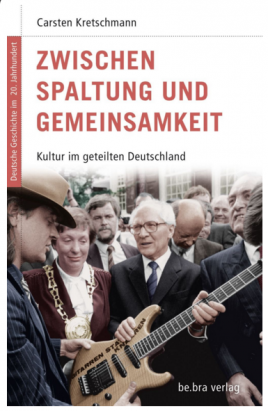