The book „The Berlin Wall 1961-1989“, published by Berlin Story Vertag, is a very interesting report about the construction of the Wall and it`s consequences.
by Admin (8 May 2014)

The book „The Berlin Wall 1961-1989“, published by Berlin Story Vertag, is a very interesting report about the construction of the Wall and it`s consequences.

It one oft he first chapters, you get informed about two of the most important Berlin´s places, that during the Cold War period were left almost abandoned and felt into disuse: Potsdamer Platz and the Brandenburg Gate. They both laied in the so called “Niemandsland“ (no man´s land) between East and West Berlin, Potsdamer Platz was even split into an American, British and Soviet sector.

The building of the Wall caused the division of whole families, of friends and lovers. A lot of pictures in the book document how strictly and repressive the division between East and West was. For example, there´s a photo that portraits a wedding couple with marriage guests on the Bernauer Straße western sidewalk, waving to family members on the second floor of a building in the Soviet sector, because they were not allowed to take part to the ceremony in the West. Another chapter of the book talks about how the houses along the border were forced evacuated and some buildings were also blown up.

Escaping across the Berlin Wall was a very dangerous activity, but lots of people try to do it anyway and someone managed to flee the country. For the ones those didn´t succeded in escaping and died trying, was erected a Victim´s Memorial. The book continues explaining where the Berlin Wall stood, defining the border between the different districts: Mitte, Wedding, Kreuzberg, Treptow and Neukölln and the border crossing points. The western side of the Wall became a real canvas for artist and painters that decorated it with a lot of painted and spray-panted works. Some of these Graffiti carried also a political and social message, therefor over the years, the Berlin Wall became a kind of mirror of the western society. The book ends obviously with the report of the fall and the consequent demolition of the Berlin Wall.

A DVD with authentic film documents in German and English is also included! The book has 128 pages, and the photographs are from the stock of the Landesarchiv Berlin. All of them are selected and commeted on by Volker Viergutz. If you are interested in the topic, you can buy the book for 9,95€ here. 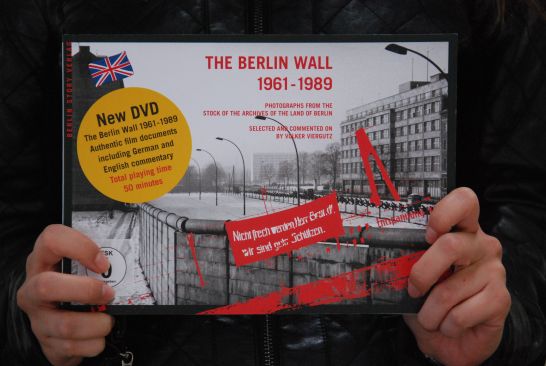