The coming week at the DDR Museum will be all about its 10-year existence. The institution is celebrating its 10th birthday and will look back at its turbulent and exciting history. In this blog we are going to review some special highlights!
by Admin (13 Jul 2016)

The coming week at the DDR Museum will be all about its 10-year existence. The institution is celebrating its 10th birthday and will look back at its turbulent and exciting history. In this blog we are going to review some special highlights!

One of the special step stones in the history of the DDR Museum was the opening of the Visitor Center in 2008. The premises are for instance very well suited for school classes in order to prepare for or to follow up on a visit of our exhibition, to do workshops or talk with contemporary witnesses. The center furthermore serves as a location for events such as lectures or concerts which in most cases are free of charge. In 2015, an enlargement of the premises was realized, now offering space for up to 120 people. Modern technology and diverse seating designs allow for all sorts of different events.

On June 10th 2010, the exhibition space of the DDR Museum was enlarged to 1000 m². New modules dealing with the topics economy, state, party, National People's Army, ideology and brotherly states were added to the exhibition already existing since 2006. The concept of a "hands-on experience of history" was of course maintained by using highlight installations such as the conference table, which offers complex information concerning the structure and work of the SED party with the help of a multi-touch technology.

Visitor numbers in the range of millions

In December 2009, we were happy to greet our millionth visitor. Kathrin Worreschk and her companion were excited about the gift basket they were given as well as a life-long free entrance to the museum. Six years later, in September 2015, we surprised our four millionth visitor and her companion with yet another present: Bea Vos from the Netherlands was given a certificate and life-long free entrance to the exhibition, as well. We are curious when we are going to greet visitor number 5 000.000!

Other highlights in the history of the DDR Museum were the nominations for the "European Museum of the Year Award" in 2008 and 2011. The museum is also proud of its in-house projects such as the "DDR Game", the board game "Bürokratopoly" as well as the remake of "Ligato", a tactical game dealing with the Cold War.

New area in the permanent exhibition 2016

Another highlight is yet to come: On the occasion of the Long Night of Museums on August 27th 2016 we are going to present the new part of our permanent exhibition! Here our visitors will continue to enjoy a hands-on experience of history and will learn about topics such as living, family, youth and culture in the GDR.

To the future! We are looking forward to the – at least! - next 10 years of DDR Museum! 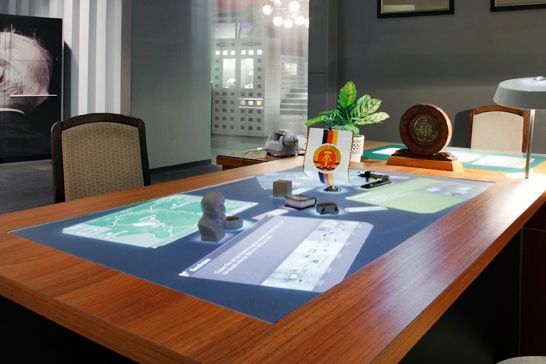 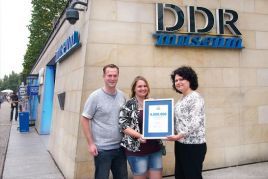 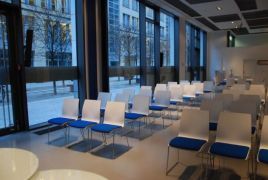 The GDR guide – it can be used as a schoolbook!

What you always wanted to know about the DDR Museum …

I would like to show you the logo of our new restaurant "Domklause"!