Old buildings are highly sought after. That has not always been the case. A poor reputation and unrenovated conditions made old buildings unattractive. Diverse interior design magazines attempted to change this. by Frank Meißner (25 Feb 2020)

It may sound quite paradoxical considering the current popularity of flats in old buildings, but it was an omnipresent issue in old city centres of the mid-1970s DDR. Living in an old building was negatively perceived and apparently required a justification:

»Does our apartment in an old building have to mean disappointment, bad mood and resignation? We object!« (Mach was aus deiner Altbauwohnung, p.3). 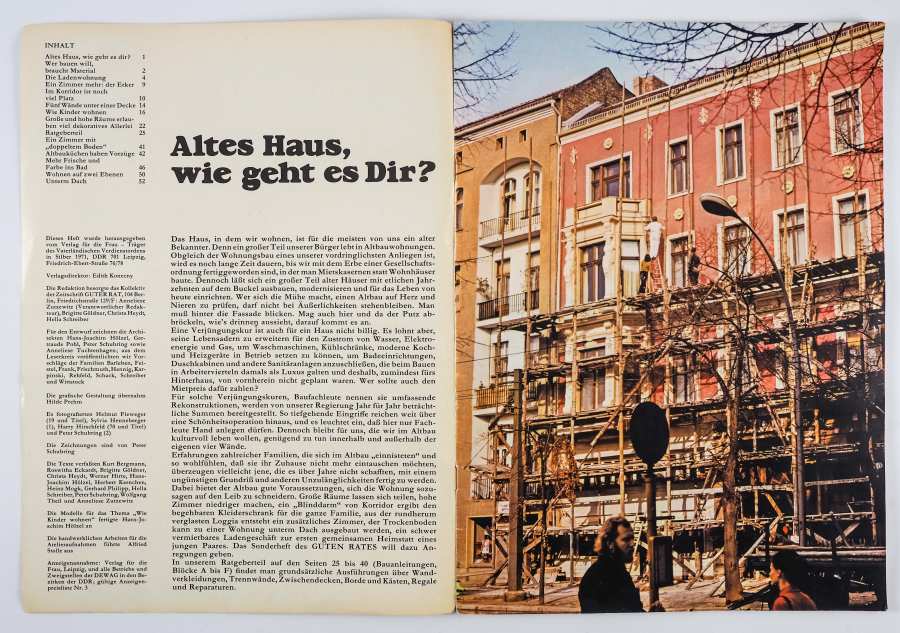 Existing old buildings in the DDR

Old buildings were considered as remains of the capitalist middle class era that needed to be replaced by modern new constructions in the long term. As a consequence of the resulting state housing policy, investments in the field of old buildings renovation had failed to materialise over several decades. Most of them were crumbling and didn’t measure up to the life-standards of the time.

Moreover, cheap rents made costly renovations unattractive even for the private landlords. The necessary modernisations were largely put aside. Besides worn or damaged roofs and floor boards, many apartments in old buildings were still heated by coal stoves and had often only one toilet on the staircase landing or sometimes no bathroom at all. 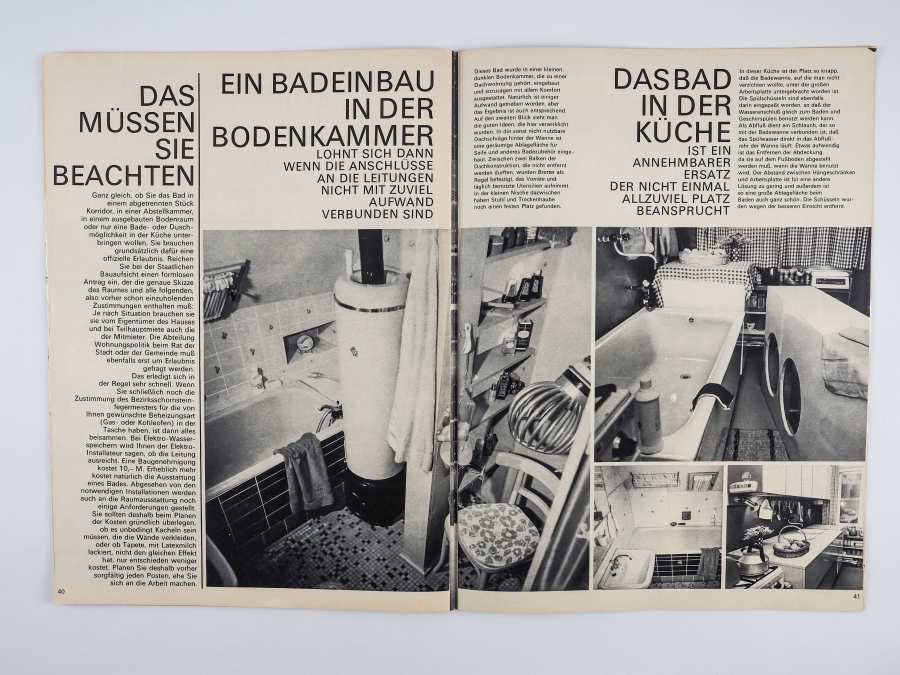 Accordingly, old buildings were considered unhygienic, dark and humid in the DDR and stood for archaic living conditions – just like tenements and rear houses in the late 19th and early 20th century.  However, this assessment as a matter of fact also applied to the Federal Republic of Germany and other Western European countries during the postwar period.

Considering the general lack of living space, the buildings in question were nevertheless almost always occupied. Young single persons or especially unmarried couples would often have to wait several years before getting their own apartment.

As the state measures of the 1960s aimed to overcome the lack of housing through the construction of prefabricated buildings, private persons turned ramshackle rooms and unused attics in old buildings into apartments. Despite the narrow spaces and the unfavourable floor plan, creative residents put great effort into creating their own living space. 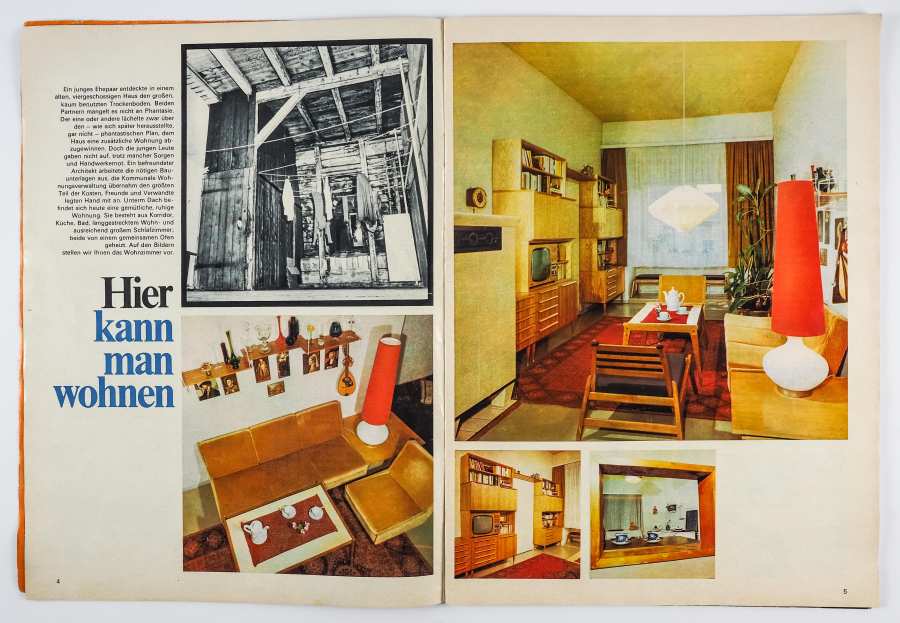 What had been an everyday-life issue for many DDR-citizens became – all of a sudden – political after the May 3rd, 1971 when Erich Honecker took up his position as general secretary of the SED central committee.
Dating from the days of its foundation, the DDR had continuously tried to solve its housing issue concentrating, however, almost exclusively on the construction of new buildings during the 50s and 60s.

As Honecker declared the »unity of economic and social policy«, the focus of the state measures shifted from economic competition with the western countries towards attempting to improve the life-standards inside of the country. In this context, the lack of housing and the poor state of the old buildings were now perceived as a »social issue«. 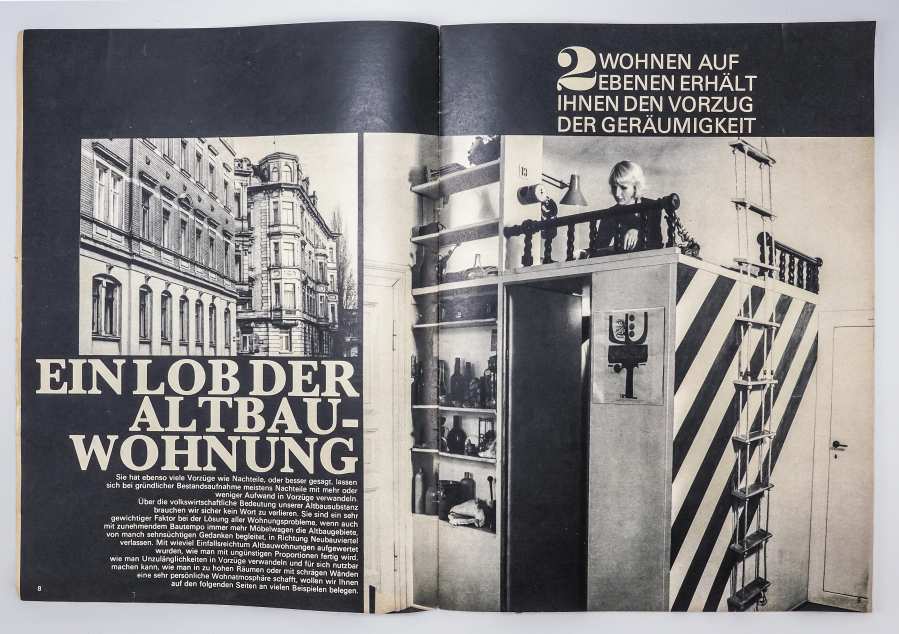 Particularly concerning the latter, the personal commitment of citizens was expected. The state partly covered the material costs of modifications, as well as the cost of tasks carried out by professional firms as electrical installation for instance.

Tools could be freely borrowed from the repair base of the local housing administration and the working hours effectuated by private individuals during their leisure time could be proportionally renumerated. Besides, favourable loans were granted to young married couples.

Throughout the 70s, this new housing policy had been reflected in various special issues of famous magazines, e.g. »Kultur im Heim« (Culture at Home) or »Guter Rat« (Good Advice). Under titles like »Make Something out of your Apartment in an Old Building« or »Living Ideas for Old Buildings«  diverse possibilities to deal with one’s ramshackle flat in an old building are described.

It is also frequently shown how a young couple, families or even a FDJ-group turn an attic, an old shop or a whole rear building into a nice living space through hard work and varied solutions. The focus is mostly put on creative ideas to save space in narrow rooms, as well as on cheap and material-saving constructions. 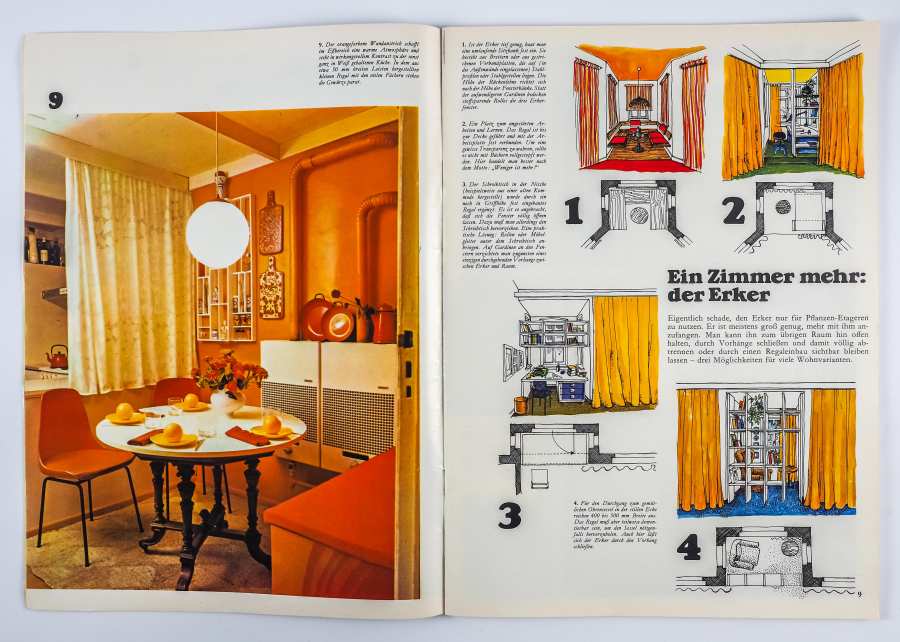 Detailed overviews about the advantages and disadvantages of different construction materials, as well as tutorials for self-made furniture modulated to room proportions are also to be found. It is striking how the results are then praised as bright, joyful and especially spacious, even if it doesn’t always appear on the photographs. 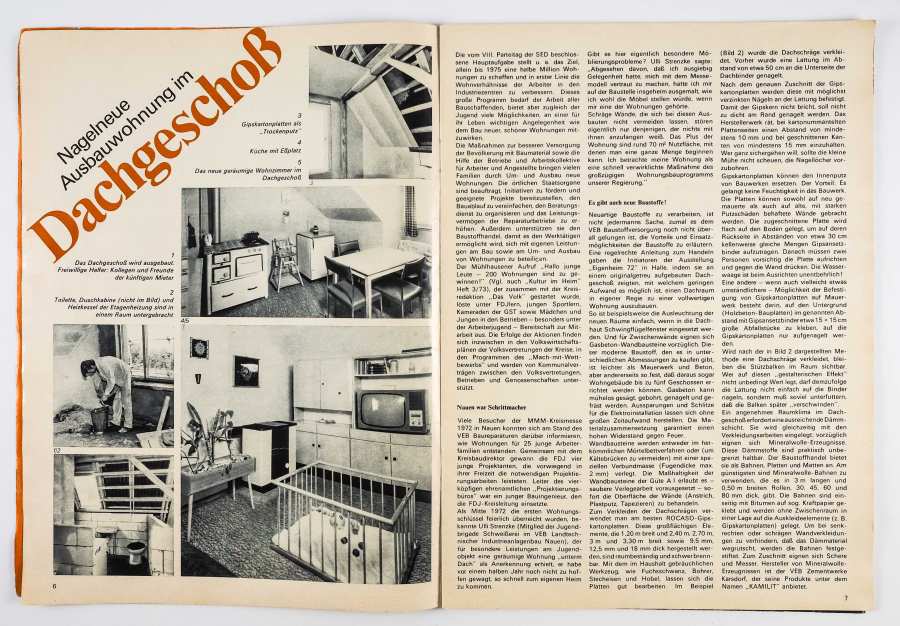 But these improvements and modifications weren’t made just for the fun of doing handicrafts but at least as much due to the lack of living space – a fact which isn’t mentioned either. The creative design of the rebuilt interiors is valorised in contrast to the ramshackle appearance of the building’s façade:

»If you put an old building to the test, you shouldn’t stop at the outward appearances. You must look behind the facades. The plaster may crumble here and there but the way it looks inside is most important.« (Guter Rat, p. 1)

In the descriptions of the apartments, buzzwords like »spacious«, »nice«, »imaginative«, »cozy«, »functional« and »fresh« are predominant. The descriptions include phrases like »light«, »cheerfulness«, »shiny colours«, »happy people« or a »young and joyful atmosphere«. 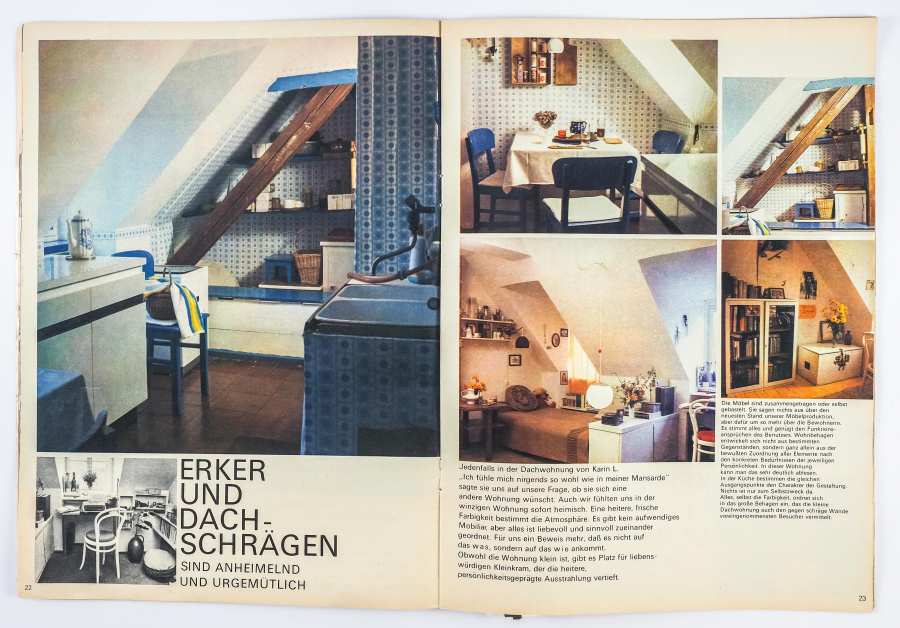 Creative Self-Efficacy amidst the State’s Claims

We must, however, emphasise that the solutions shown by the magazines are, when it comes to creativity or the furnishing and design of the rooms, just as good as representations of »DIY« shared today on social networks such as Pinterest and Instagram.

The do-it-yourself-attitude was already prevalent in the DDR, even concerning complicated manual construction. To find functional, material-sparing and simple solutions was part of its culture and not only a consequence of the deficient economy.

In fact, the initiative of the people concerning the maintenance and extension of living spaces were politically charged and seen as »expression of the development of new relationships among the people and between the citizens and their social state.« (Praktikus 1975, p. 13f).

Over the years, more and more books with multiple issues like »Praktikus – Guide to Self-Help« or »You and your Apartment – Handicraft Tips« had offered detailed instructions to maintain, repair and construct living spaces. 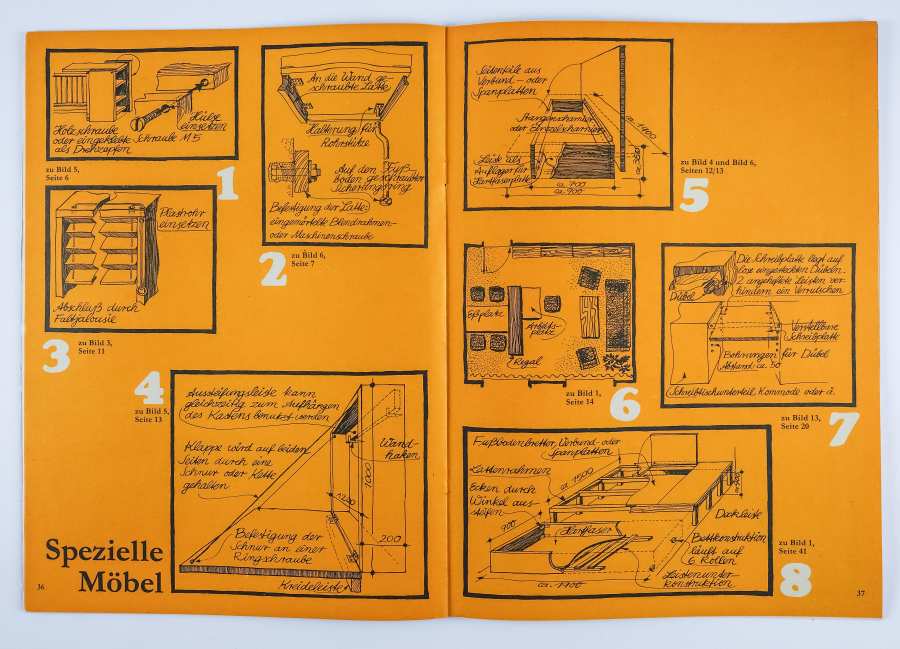 However, these two publications refer explicitly to the new programme of housing construction declared at the 8th SED Party Congress in the forewords of their 1974/75 editions. In the same way, the 1974 handicraft and furnishing guidebook »Better Living in Old Buildings – Instructions for Furnishing and Rebuilding« takes up the subject of a DIY-styled modernisation of old buildings.

In regard to the state’s housing policy, the creative self-efficacy of the DIY-approach appears to be a state-initiated measure. Advertising to counter »inconvenient room proportions« using »a very personal living atmosphere« (Wohnen im Altbau, p. 8) appears as a way to cover up the fact that the public means weren’t sufficient to solve the housing problem.

When it comes to the renovation of old buildings, the DIY-culture has also to be considered in the light of the general shortage of skilled construction workers and craftsmen with the needed competences. The same applies for the tendency to »refine« (Wohnideen, p. 10) donated or cheap purchased furniture developed in a context of lack of goods and materials. 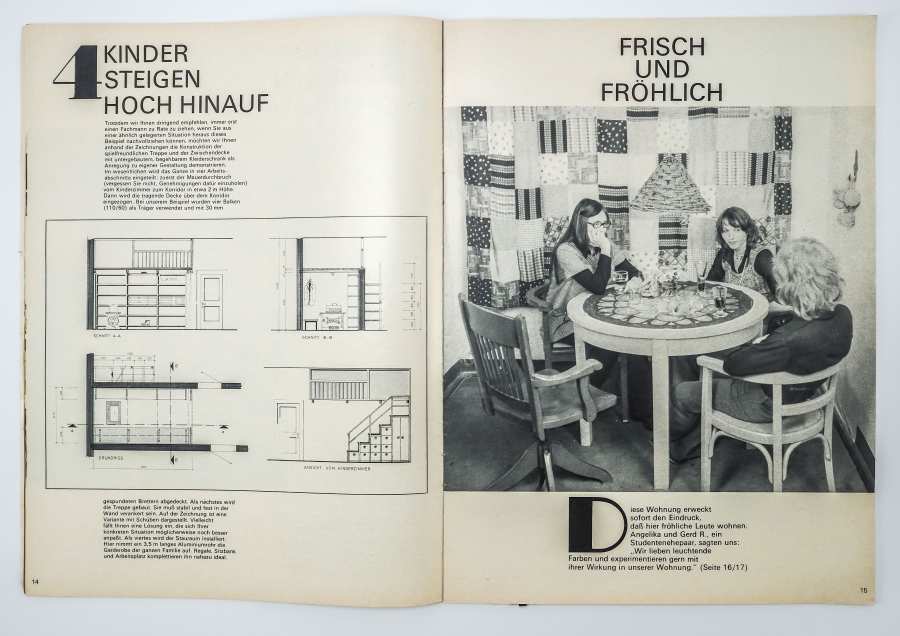 The political interest for this trend went beyond the necessity to lower the pressure on the construction capacities of the state by emphasising the initiative of its citizens, though. Questions of colour design or space composition seem especially charged – to inhabit passively one’s apartment without any global concept wasn’t satisfactory. On the contrary, the concept of the »New Man« in socialist society required a highly creative approach:

»Man has a creative approach to the room and its furnishings. […] The combinations of object and colour, space proportions, light and purposiveness appear as crucial and mandatory to achieve a satisfying and harmonic result. Living is an active state today!« (Wohnideen, p. 22). 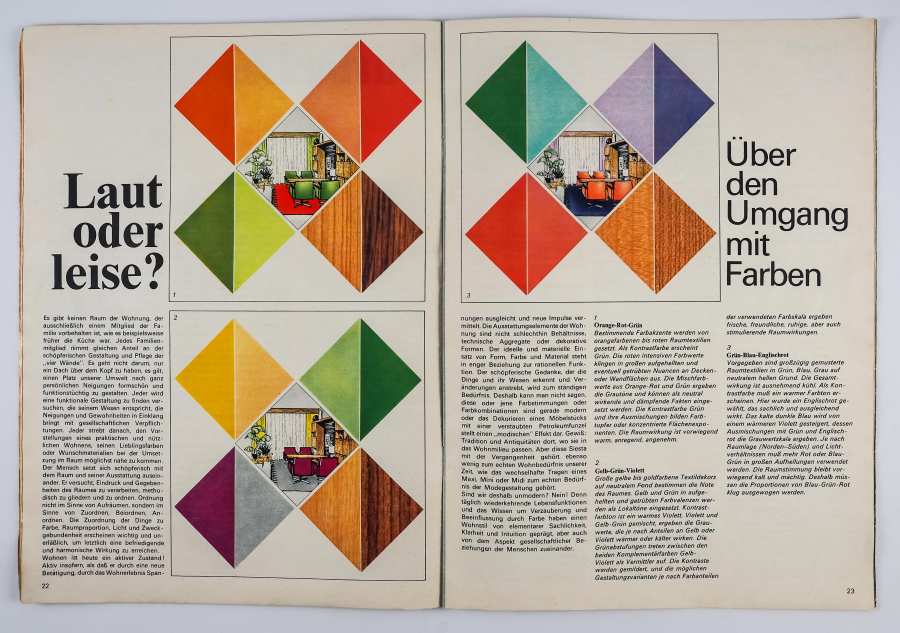 Everybody who felt overwhelmed by this demanding claim and the many decisions to make could fortunately get some help:

»The colour design and the lighting, the decorations, the furniture and many more play a role in the organisation of a functionally and aesthetically tidy environment where our lust for life is raised. For everybody who finds it complicated to arrange the many particular problems into a coherent whole, there are advisors available: the professionals in the accommodation counselling centre« (Wohnideen, p. 49). 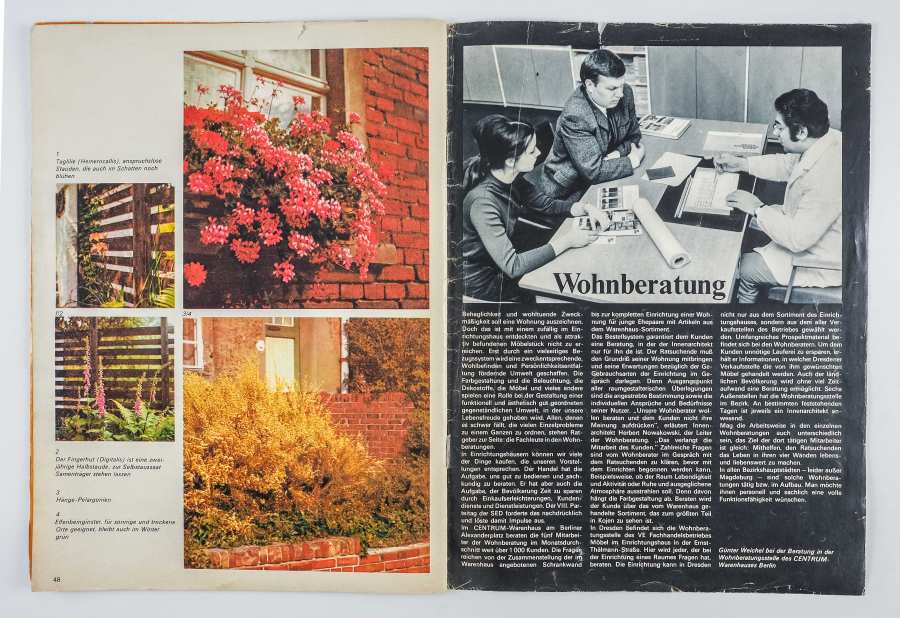 In spite of these challenging living conditions, which demanded much more effort and provided less comfort than in prefabricated houses, old buildings evolved into a popular type of housing. Unlike the standardised apartments of the prefabricated buildings, the individual layouts and the great need for renovation of the apartments in old buildings offered numerous design options.

The guidebooks published on this topic in the 1970s encouraged the residents to realise their own creative ideas of home furnishing.

More about the topic »living in old buildings« in our collection: 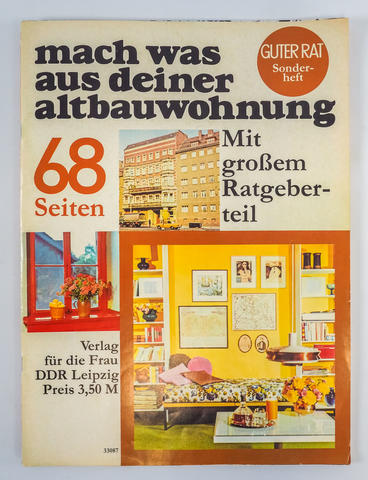 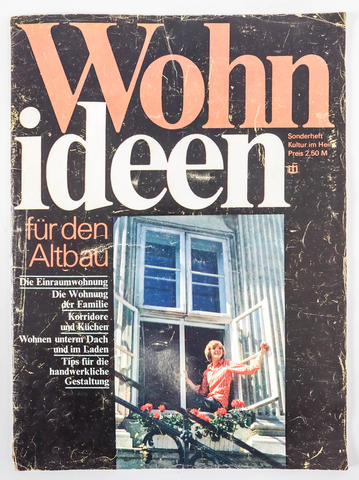 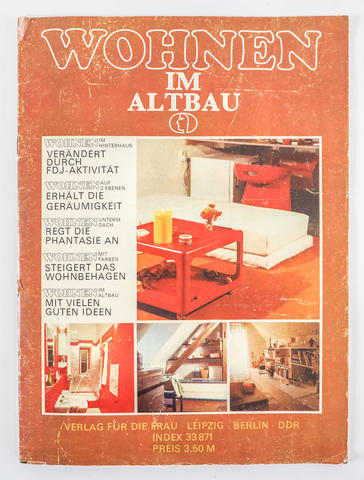 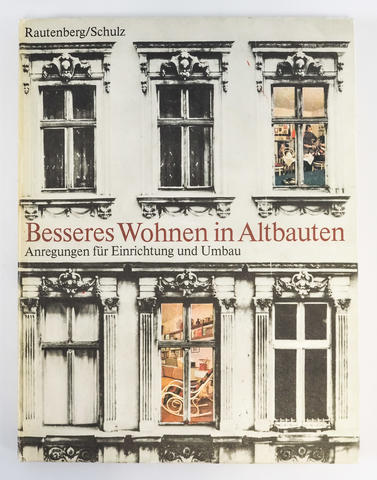 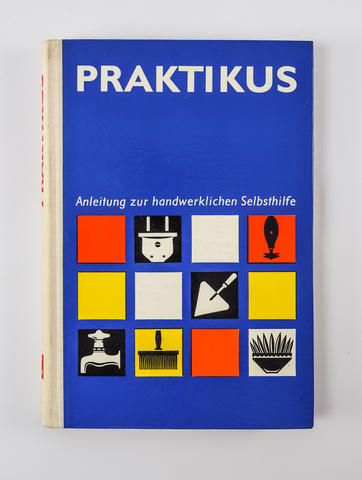 “I love – I love all – all humans” – Erich Mielke Biography

Who is getting in and out of the house? The house book in the DDR