The DDR Museum welcomes Stephan Hilsberg and Dr. Christian Booß for a discussion on the turbulent final months of the DDR. by Praktikant (9 Jun 2017)

It was a full audience that received former SPD politician Stephan Hilsberg and Dr. Christian Booß for a discussion on the formation of opposition groups during the late DDR period. The topic was so exciting and the following discussion so lively that the event filled an entire two hours and could have gone on longer had there been sufficient time.

The discussion kicked off with a short introduction of Mr. Hilsberg and his biography. Mr. Hilsberg himself noted that he lived the life of a ‘normal’ citizen of the DDR. Born in Müncheberg in 1956 as the son of a priest, his family background prevented him from being admitted into the higher classes to complete his A-Levels. Instead he chose vocational training as a data processor. After a brief pause during which he undertook military service in the Nationale Volksarmee, he began working as a programmer at the Berlin Institute for Medicine and Biophysics. Only in 1988 did he enter the political scene. What caused such a ‘normal’ citizen to enter the opposition and become a founding member of the oppositional SDP (Social Democratic Party of the DDR)?

When posed this question, Mr Hilsberg remembered fondly the chunks of wisdom handed down from his father. ‘The party think they have a monopoly on truth […] but you are a free person and you are only answerable to God’.

Alongside his upbringing, Mr. Hilsberg highlighted the effect of the Rosa Luxemburg protests of 1987 as a motivation for his entry in politics. The Rosa Luxemburg protests took place in protest of the imprisonment of a group of dissidents in 1987, whose only crime was to have unfurled a banner bearing the famous Luxemburg quote: ‘Freedom is always the freedom of dissenters’. Mr. Hilsberg realised at this time that any political change could only be triggered by actually taking action. He became involved with the Friedensbewegung (peace movement) at first, but soon noticed their lack of co-ordination.

‘Nobody had a clear political solution to the problem of the SED’ he explained. It was from this seed of dissatisfaction that the idea of forming a political opposition party grew. The party that was formed was the Social Democratic Party of the DDR (SDP) which was linked with the Social Democratic Party of Germany (SPD) in the West. By 1990 Mr. Hilsberg had risen to the position of Erster Sprecher (first speaker – the party leader) and continued on to have a long and successful political career.

After Mr Hilsberg and Dr. Booß had finished their discussion, they turned to the audience for questions. A lively discussion ensued, covering a range of topics from Aufarbeitung the process of working through the totalitarian past) to the differences between the SDP in the East and in the West.

Towards the end the discussion switched to a more light-hearted topic: Mr. Hilsberg’s musical talents. A keen player of the piano, he is currently pursuing a career in music. When asked what his piano meant to him, Mr. Hilsberg answered simply ‘everything’.

The DDR Museum would like to thank Stephan Hilsberg and Dr Christian Booß for their informative and interesting discussion! 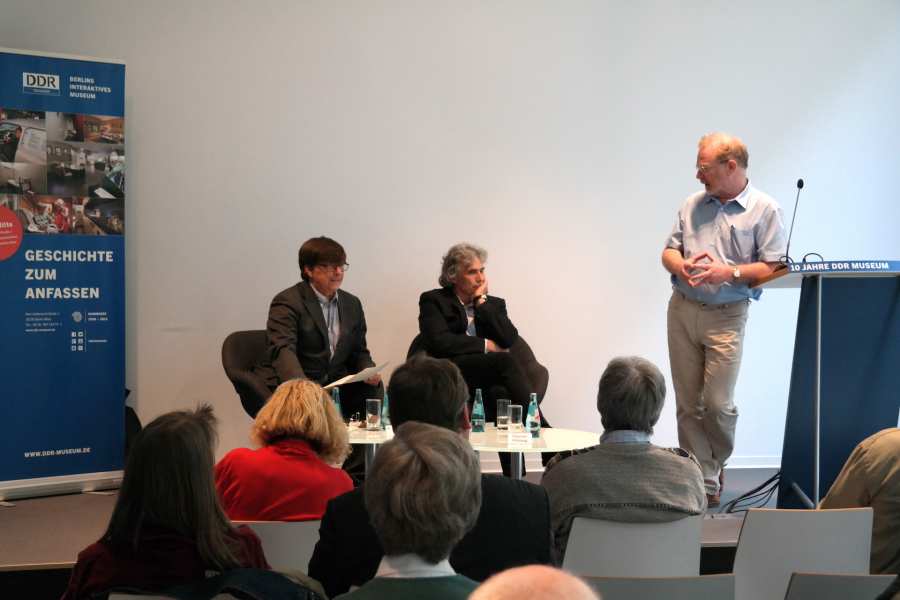 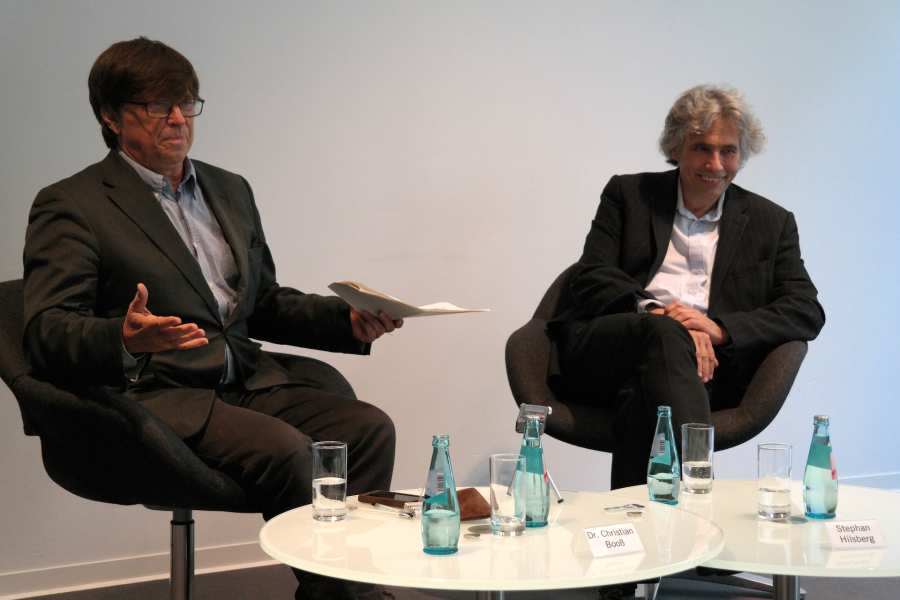 Theo Tintenklecks, spook at the museum and many visitors at the Long Night of Museums

The dioramas are here